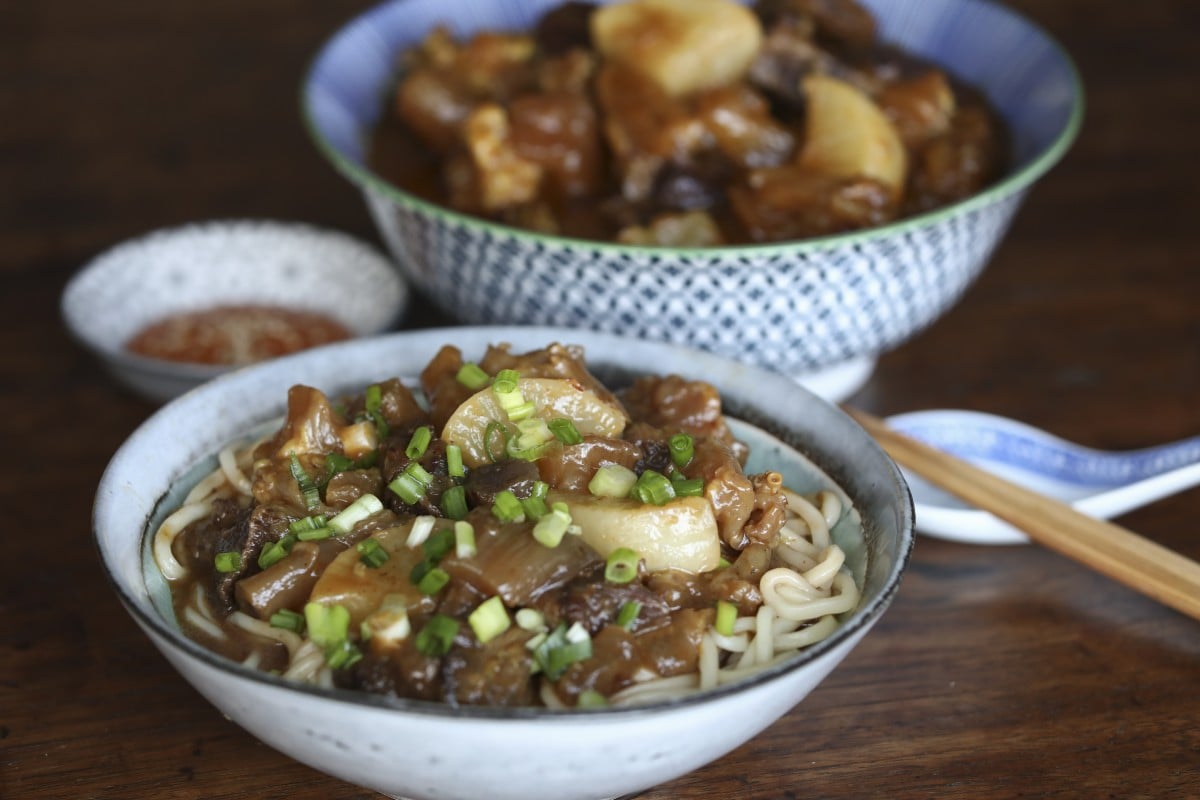 Beef brisket noodles is a famous dish in Hong Kong. It is something that tourists (back when we had tourists) would seek out, and locals argue about which place makes the best version, and which cuts of beef they prefer, because these shops sell more than just brisket.

In addition to beef in a light broth, they also offer curried beef or tendon, which makes for a nice change.

For braised dishes, I normally use brisket, but the quality of the dish depends on which part of the brisket you get. The thick, fatty, layered part of the brisket is tender when it’s cooked low-and-slow, but if you use the flat, lean part, the meat becomes hard and dry. So lately, I’ve been using beef cheek, which gives more consistent results.

If I’m not in a rush, I cook the ingredients in a clay pot placed over a low flame – it usually takes about five hours, if you're using tendon. If I need the dish to be ready in about one-third (or less) of that time, I use a pressure cooker – either a stovetop version (which is more powerful) or an electric model (an Instant Pot or something similar), which takes a little longer.

How much tendon you use is up to you: the beef and tendon together should weigh 1kg (35 oz). I like to use 500 grams (18 oz) of each, but most people prefer more beef. It would be a mistake to leave the tendon out altogether, though, because it gives the sauce a lovely, sticky quality.

I like Koon Yick Wah Kee curry powder, which is made in Hong Kong, but you can use another brand.

This curry doesn’t keep as well as other braised dishes, because of the Chinese radish: if you keep it for more than a few days, the bitterness from the vegetable becomes unpleasantly strong.

Cut the beef and tendon into two-bite pieces. 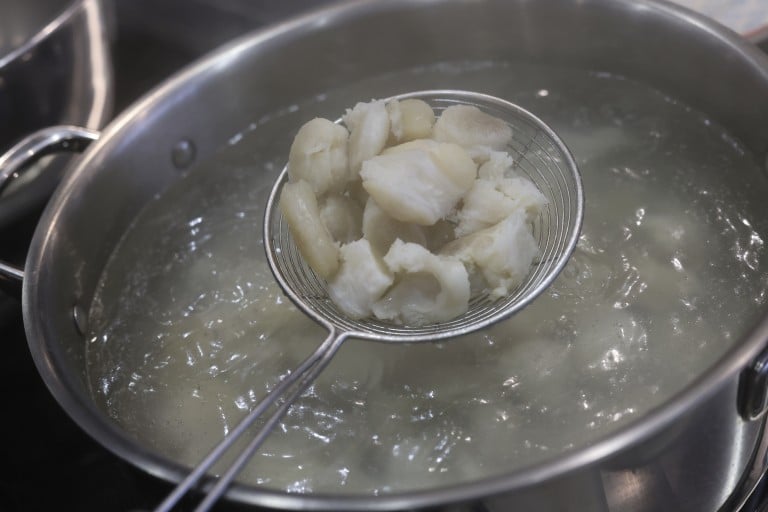 Bring a large pot of water to the boil. Add the beef and blanch for about one minute, then use a large slotted spoon to remove the pieces from the water and drain them in a colander. Add the tendon pieces to the pot and bring to the boil. Lower the heat and simmer while preparing the other ingredients. Occasionally spoon out and discard the scum that floats to the surface of the water as the tendon cooks. 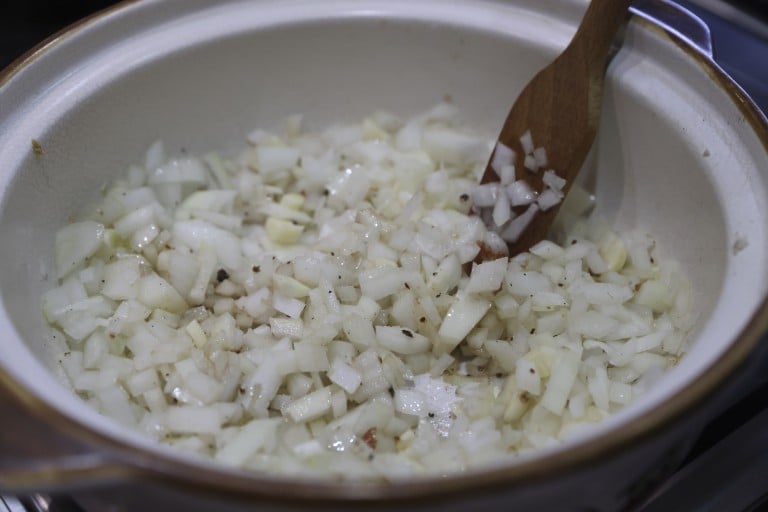 Finely dice the onion. Cut the garlic cloves in half, then thinly slice them. Cut the white radish into three-bite pieces. 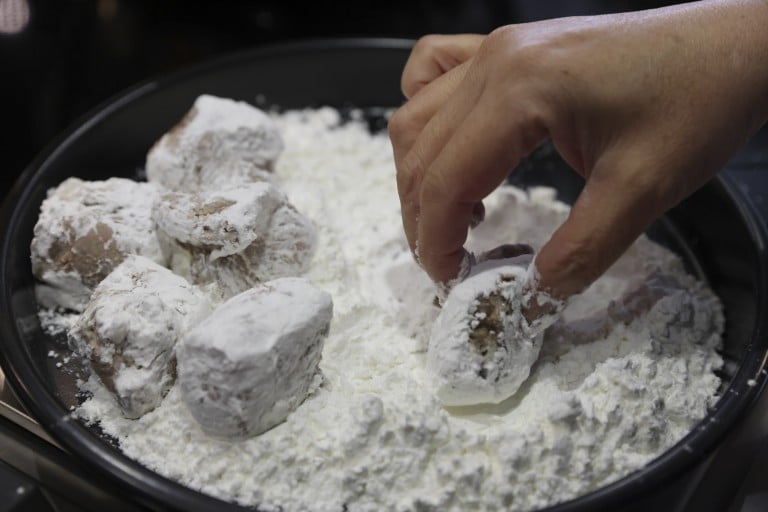 Sprinkle some cornstarch over the beef pieces and mix so they are lightly coated.

Heat 60ml (¼ cup) of oil in the pot you are going to use to braise the dish; either the pressure cooker/Instant Pot, or a clay or steel pot that holds about 2.5 litres (2.5 quarts). When the oil is hot, add some of the beef pieces. Lightly sear the beef, turning the pieces over as necessary. Add a little more oil to the pan if it seems dry. Sear the beef in batches, then put it on a paper-towel-lined plate or tray.

In the same pot (no need to wash it), add the onion and garlic and stir to coat with the fat. Cook for about two minutes, or until the onion softens, stirring as necessary.

Add the tomato purée and stir for about 30 seconds. Stir in the curry powder, chilli flakes, sugar and salt.

Add the beef to the pan holding the onion and garlic. Use a large slotted spoon to lift the tendon out of the pot of water and add the pieces directly to the pan with the beef.

If using a pressure cooker, put the lid on the pan and seal it. Cook on high pressure for 15 minutes. Turn off the flame and let the pot cool naturally.

Remove the lid and taste the sauce, adjusting the seasonings if necessary. Stir the ingredients, then test the consistency of the beef and tendon. If the sauce is too thick, stir in more water. Put the lid back on the pot and seal it. Cook on high pressure for about 10 to 20 more minutes (you have to use your judgment here). Let the pot cool naturally, then unseal. By this time, the meat and tendon should be tender. If not, put the lid back on the pot, seal it and cook until tender.

Stir in the pieces of white radish, seal the pot and cook on high pressure for eight to 12 minutes (again, use your judgment). Cool the pot naturally, then remove the lid. The beef, tendon and radish should be tender, and the sauce should be of a light coating consistency. If it is too watery, simmer the ingredients uncovered until the sauce reduces to the right consistency. Once again, taste the sauce for seasoning and correct, if necessary.

Taste for seasoning, then correct, if necessary.

Add the white radish to the pot, then bring to the boil. Lower the flame, cover with the lid and simmer, stirring occasionally, until the radish, beef and tendon are tender (about 45 minutes). Taste the sauce for seasoning and correct, if necessary.

Put the hot rice or noodles into bowls and add some of the curried beef, tendon and radish. Sprinkle spring onion over each portion and serve immediately.

17/17
Susan Jung Chinese Main Course High-Protein Low-Carb Dairy-Free Kosher Peanut-Free Medium
Diet definitions
Liking this recipe?
Now you can save the recipe you into your own collection.
Find us on facebook
Join our community and get the latest recipes from all over Asia for you to make at home.