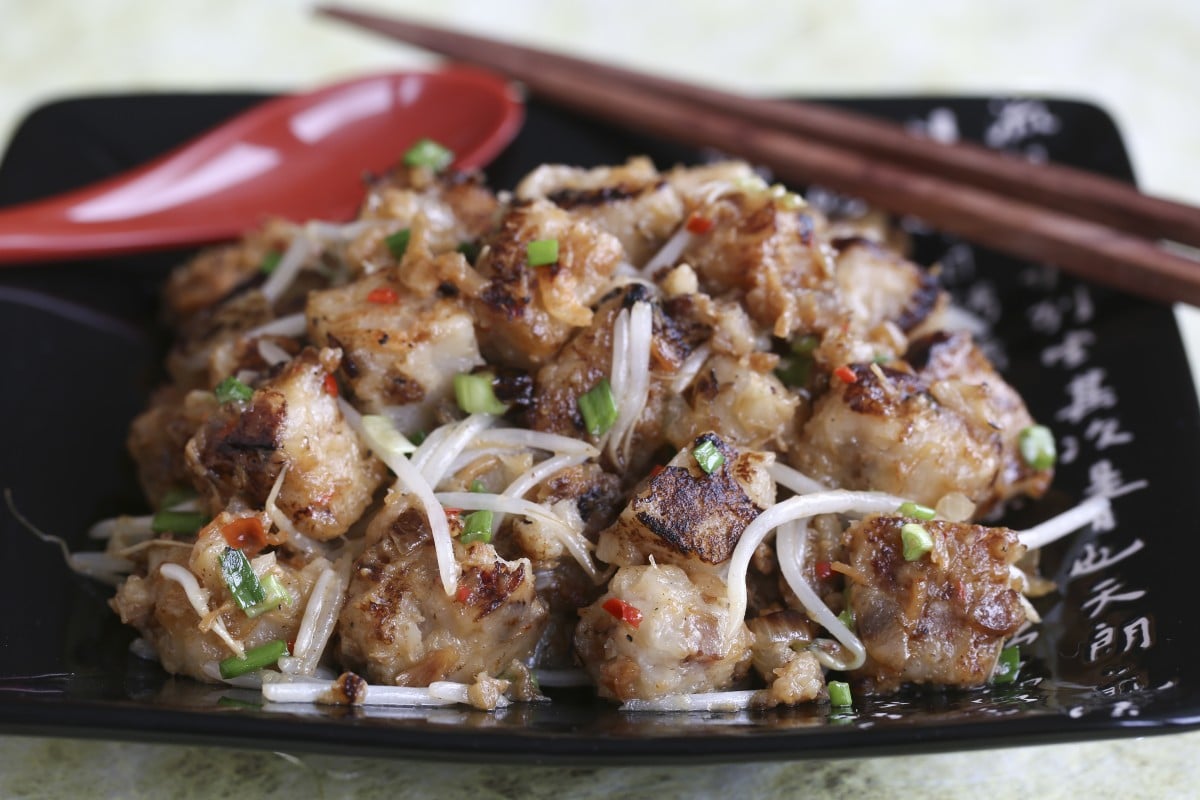 Loh bok goh, often called radish (or turnip) cake or pudding, or carrot cake (in Malaysia and Singapore), is available year-round but is especially good in the winter, when the loh bok - white radish (also known as daikon) - is crisp and sweet. It's also associated with the Lunar New Year because it's supposed to bring good fortune. It's easy enough to make, but this dish uses a commercial version, sold from restaurants and sometimes available in the refrigerated section of supermarkets.

Chiu Chow sweet preserved radish is called tian choi poh (or cai poh, or choi poh). It is sold whole or chopped. It looks just like regular choi poh, so if in doubt, taste – if it’s very salty, soak the vegetable in several changes of cool water, to rinse off the excess salt.

XO sauce is sold in the sauce section of Chinese supermarkets, or you can make your own with this recipe.

Cut the loh bok goh into 2cm ( ⅞in) pieces. Rinse the preserved radish with cool water, then dry it with paper towels before rough chopping it. Drain off as much oil as possible from the XO sauce (the oil can be used for stir-fries). Slice the bird’s-eye chilli into thin rounds, squeezing out and discarding as many of the seeds as possible. Cut the spring onions into 3mm ( ⅛in) pieces.

Heat about 30ml (2tbsp) of cooking oil in a well-seasoned wok placed over a high flame. When the wok is hot, add the loh bok goh. Gently spread the loh bok goh over the wok so as much as possible comes into contact with the surface of the pan, so that the pieces brown. Use a wide cooking spatula to lift up and turn over the loh bok goh as necessary.

Add the Chiu Chow preserved radish, the XO sauce, bird’s-eye chillies, fish sauce and white pepper. Continue to lift and turn the ingredients. If the ingredients stick, drizzle more oil into the sides of the wok.

When the loh bok goh is sizzling hot and the ingredients are well-combined, stir in the bean sprouts and cook for about a minute. Scatter with the spring onion, stir well, then transfer the ingredients to a serving plate.

4/4
Susan Jung Chinese Main Course Easy
Pairs with
XO sauce - luxurious dried scallop condiment
Medium
1 hour
Liking this recipe?
Now you can save the recipe you into your own collection.
Find us on facebook
Join our community and get the latest recipes from all over Asia for you to make at home.