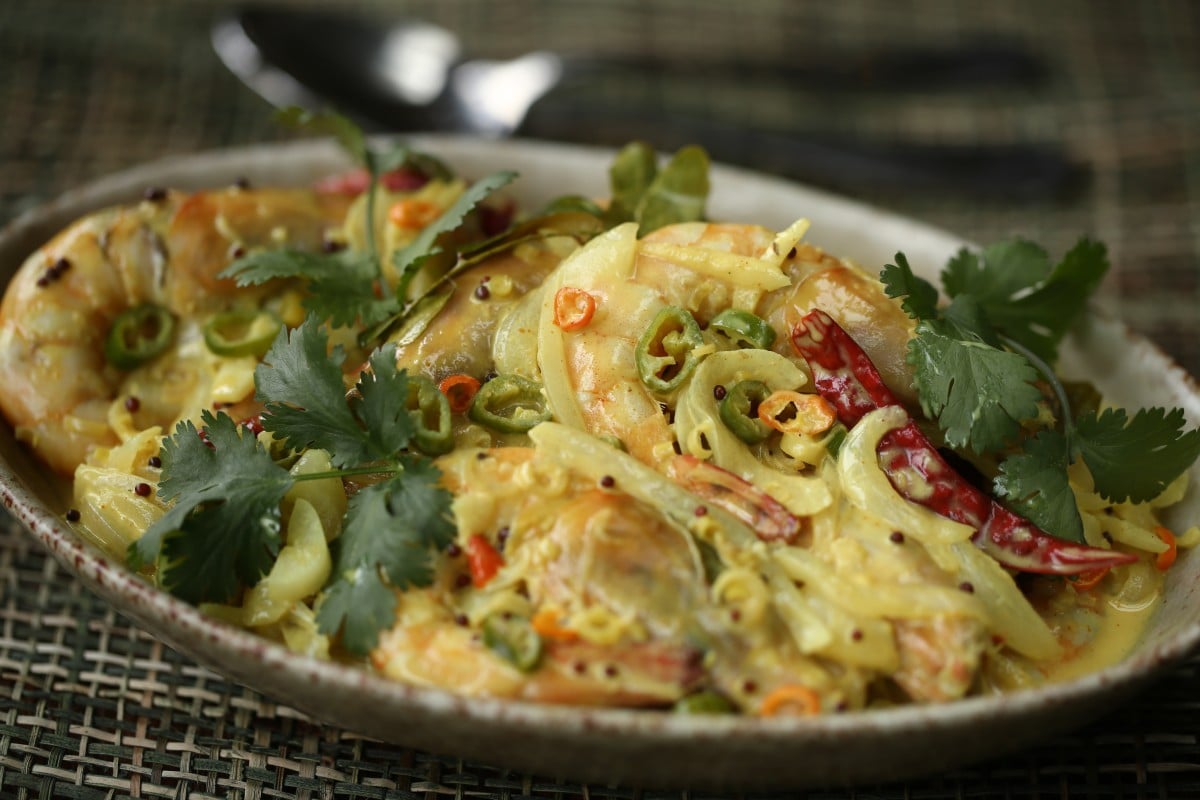 It’s difficult to imagine how bland our food would be without the spices of South and Southeast Asia. The spice trade has influenced cuisines in ways we take for granted. Can you imagine cooking without pepper? Or baking without nutmeg, cinnamon or vanilla?

The spice trade went both ways. Chillies, for instance, made their way from Mexico, Peru and elsewhere in Latin America to the rest of the world, where they are now considered an inherent part of spicy cuisines, such as those of Korea and India.

This simple shrimp curry takes its main influences from India, with a bit of Southeast Asia thrown in. Because it uses commercial curry powder, instead of spice fried and pounded the traditional Indian way and blended specifically for seafood, it’s a lot easier to make (and less complex) than curries found in India. But it’s still delicious.

For this dish, I like to remove the shells from the shrimp but leave the heads attached because they add a lot of flavour. If you’re feeding people who dislike shrimp heads, trim them off, and use them and the shells to make shrimp stock for another dish.

Curry leaves have a wonderful fragrance that is lost when they are dried. You can find fresh ones at shops selling South Asian ingredients (along with mustard seeds and dried chillies). Curry leaves maintain some of their fragrance when frozen, so buy more than you need, wrap the excess in an airtight bag and freeze. 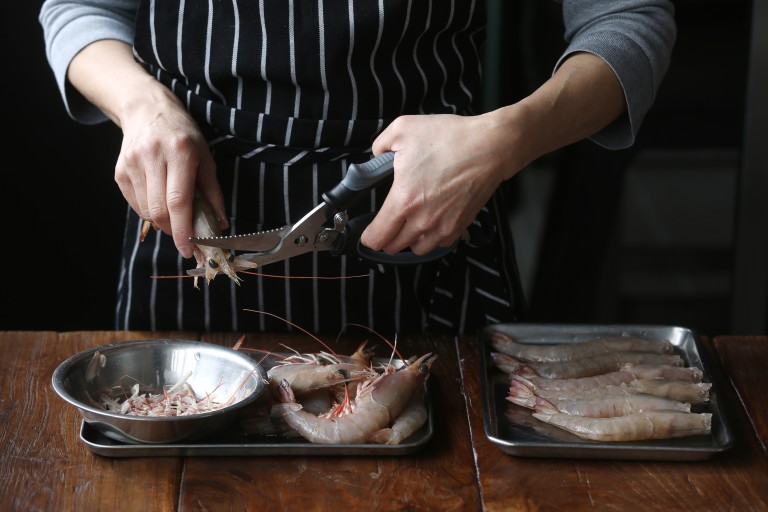 Use kitchen shears to trim off the antennae and sharp spear from the head of the shrimp, cutting them off just behind the eyes. Remove the shells, except for the tail.

Cut a slit down the back of each shrimp and remove the vein.

Thinly slice the onion and garlic cloves, and finely julienne the ginger.

With the flat side of a cleaver or sturdy knife, lightly smash the length of the lemongrass stalks, then slice it thinly. 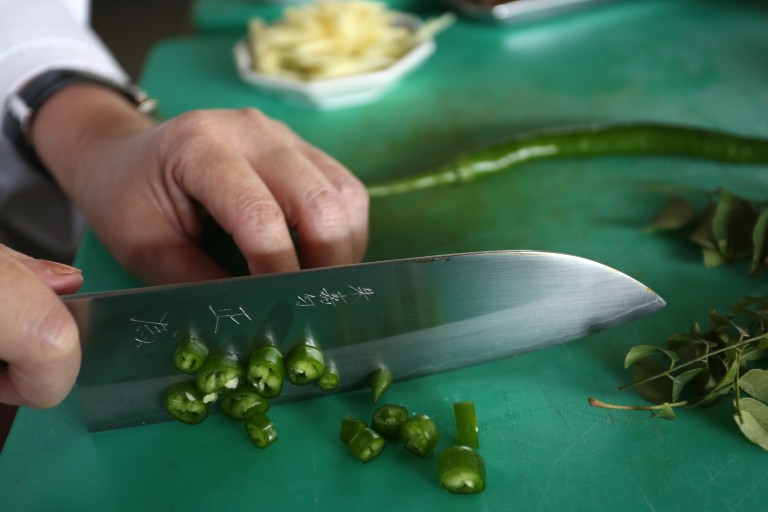 Cut the bird’s-eye chillies into thin rings, squeezing out and discarding the seeds as you go. Cut the banana chilli on the diagonal into slices about 3mm (⅛in) thick.

If using palm sugar, chop or shave it into small pieces.

Place a wok over a high flame and, once hot, add about 25ml (5tsp) of oil. Swirl to coat the wok with the oil. Add the curry leaves and dried chillies and stir for about 15 seconds, or until they start to darken. Use tongs or chopsticks to remove them from the wok, leaving behind as much oil as possible, and set aside. 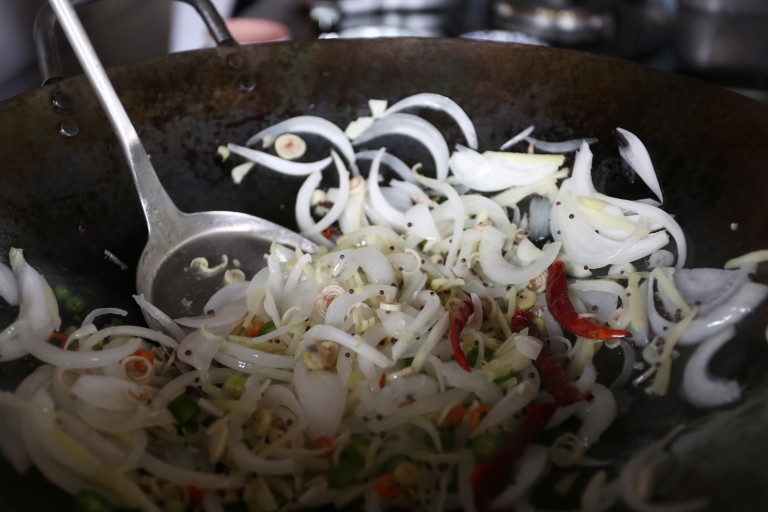 Add the onion and garlic and stir-fry over a high flame, until the onion starts to soften.

Add the mustard seeds and stir-fry constantly for 10 seconds, then stir in the ginger, lemongrass and bird’s-eye and banana chillies. Stir constantly until fragrant. 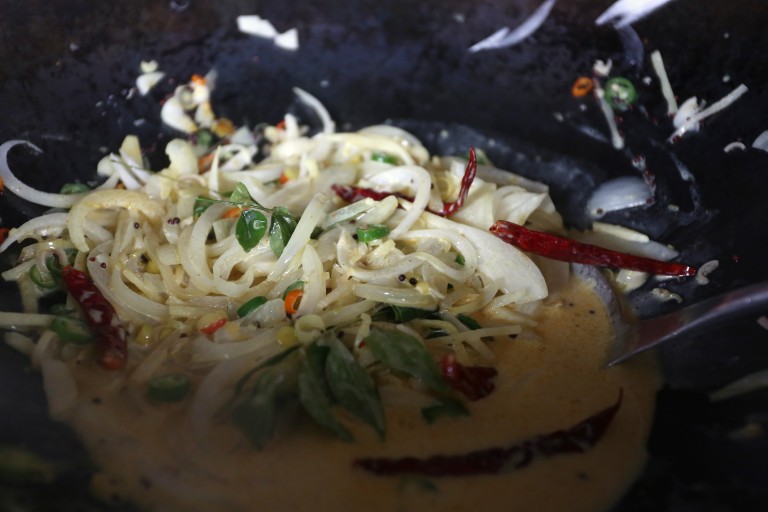 Sprinkle in the curry powder and stir until it is evenly distributed, then mix in the fish sauce, lime juice, sugar and one teaspoon of salt. Return the curry leaves and dried chillies to the wok and stir well. 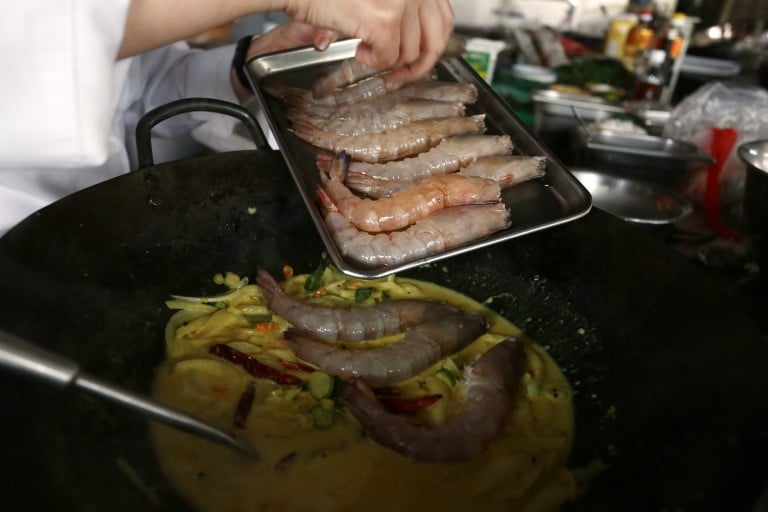 Add the shrimp and simmer until they curl and turn pink, then turn off the flame.

Scoop the ingredients into a shallow bowl, then garnish with fresh coriander sprigs. Serve immediately with bread or steamed rice.

13/13
Susan Jung Fusion Dinner Shellfish Vegetables Dairy-Free Gluten-Free Peanut-Free Pescatarian Easy
Diet definitions
Liking this recipe?
Now you can save the recipe you into your own collection.
Find us on facebook
Join our community and get the latest recipes from all over Asia for you to make at home.