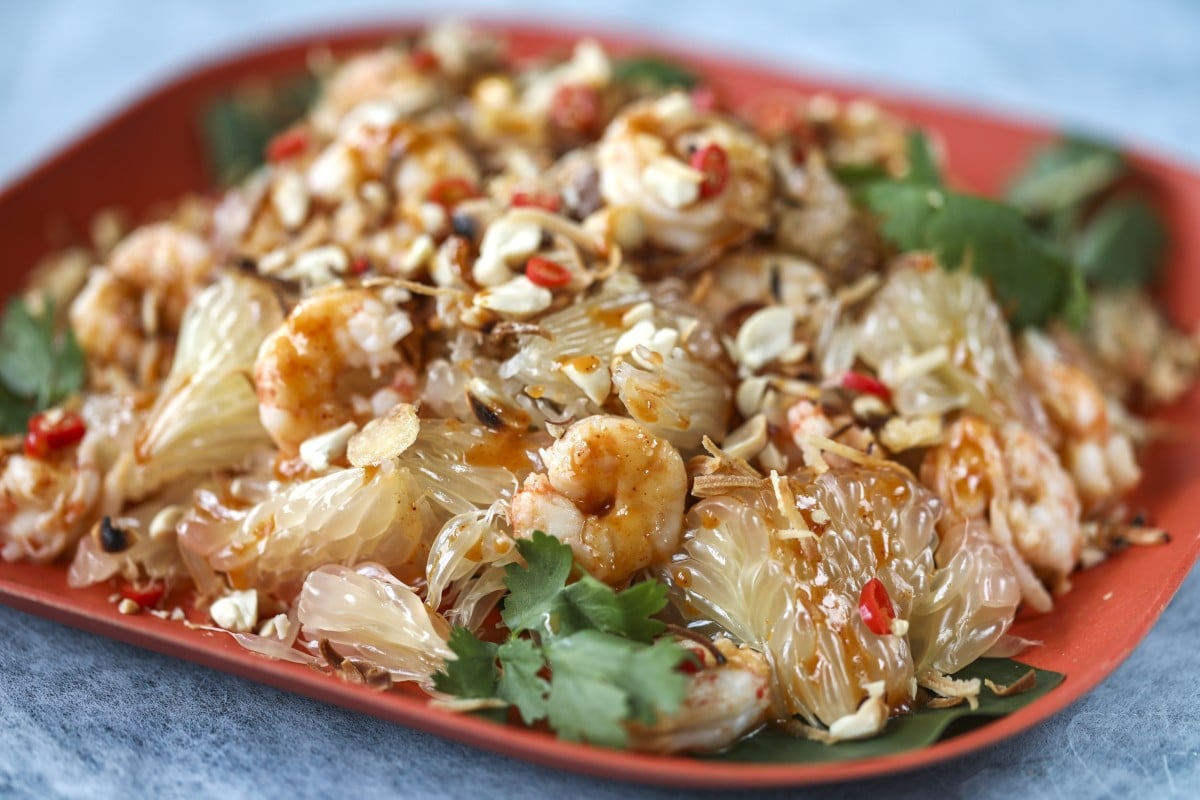 A pomelo looks like a large, slightly misshapen grapefruit, only it’s much more delicious, at least if you get a good one. The pomelo, which is one of the parent fruits of the crossbred grapefruit (the other parent is the orange), can be juicy and mildly sweet, with a diverse range of flavours – my favourite is when it tastes something like strawberries. A bad pomelo, however, has dry, fibrous flesh. Even the experts can have a hard time choosing a good one.

Thai pomelos, which tend to be smaller than the ones from China, are more expensive, but they are usually the ones I buy, both for eating plain and to use in dishes. Preparing a pomelo isn’t just a matter of cutting it in half equatorially (as opposed to slicing it through the stem ends) and scooping out the flesh, as you would do with a grapefruit. Instead, the pomelo is peeled of its thick rind, separated into segments, then the tough membranes are removed.

To peel it, use a sharp knife to cut the rind – without slicing into the flesh – into six sections from stem end to bud end. Insert a large, flattish spoon – bowl side down – between the flesh and the rind and separate the two by forcing the spoon down, following the fruit’s contours.

There are many versions of pomelo salad and some have lots of filler ingredients such as lettuce, herbs or other types of fruit (grapes, strawberries or tomatoes). I like my pomelo salad to be quite pure, so the fruit’s flavour and texture are not muted.

If you don’t eat shrimp, leave it out and substitute cooked, shredded chicken, either the leg or breast meat.

Nam prik pao is a spicy, oily chilli paste sold in jars. You’ll see it in the Thai or Southeast Asian section of good supermarkets, which is where you’ll also find the fried shallots, toasted, grated coconut and the palm sugar used in the dish.

Bring a medium-sized pot of lightly salted water to the boil, add the shrimp and cook for about 30 seconds, or until they curl and turn pink. Drain in a colander. 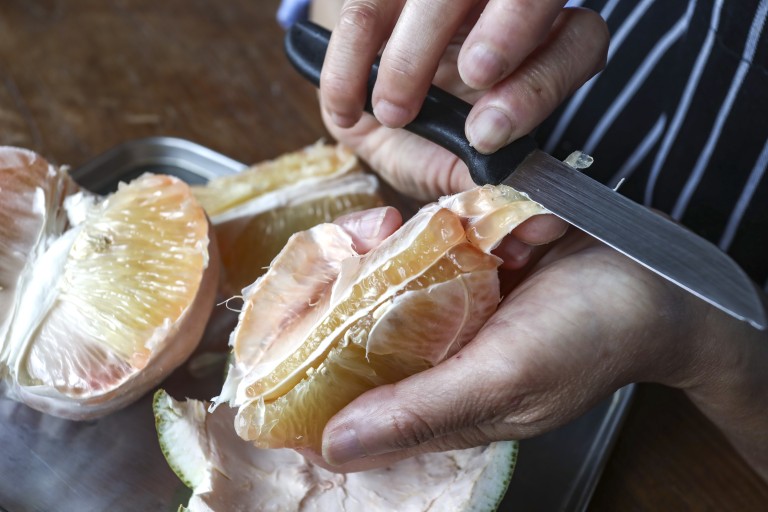 Separate the peeled pomelo into segments, then remove the membrane and seeds from each piece. Pull apart the pomelo flesh into small bite-size pieces.

If using palm sugar, chop it into small pieces. 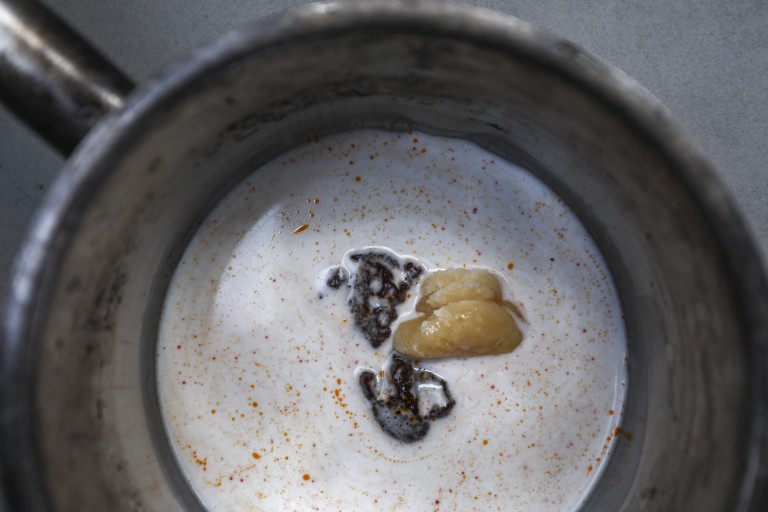 Put the coconut milk and nam prik pao into a small saucepan and bring to the boil. Lower the heat and simmer for a few minutes, or until slightly reduced. Remove the pan from the heat, add the fish sauce, lime juice and sugar, and stir until the sugar is dissolved. Taste the sauce and adjust the seasonings, if necessary.

Roughly chop the peanuts. Cut the bird’s-eye chillies into thin rings, squeezing out and discarding the seeds as you go.

Put the pomelo pieces into a bowl and add the shrimp, a few coriander sprigs, and half the peanuts, bird’s-eye chilli, fried shallots and toasted coconut. Pour about half of the coconut milk/nam prik pao mixture into the bowl and mix so the ingredients are lightly coated.

Pile the mixture onto a serving platter and scatter the remaining peanuts, chillies, shallots and coconut on top. Garnish with a few more coriander sprigs, then drizzle with the remaining coconut milk/nam prik pao sauce before serving.

9/9
Susan Jung Thai Appetiser Balanced Dairy-Free Pescatarian Easy
Diet definitions
Liking this recipe?
Now you can save the recipe you into your own collection.
Find us on facebook
Join our community and get the latest recipes from all over Asia for you to make at home.