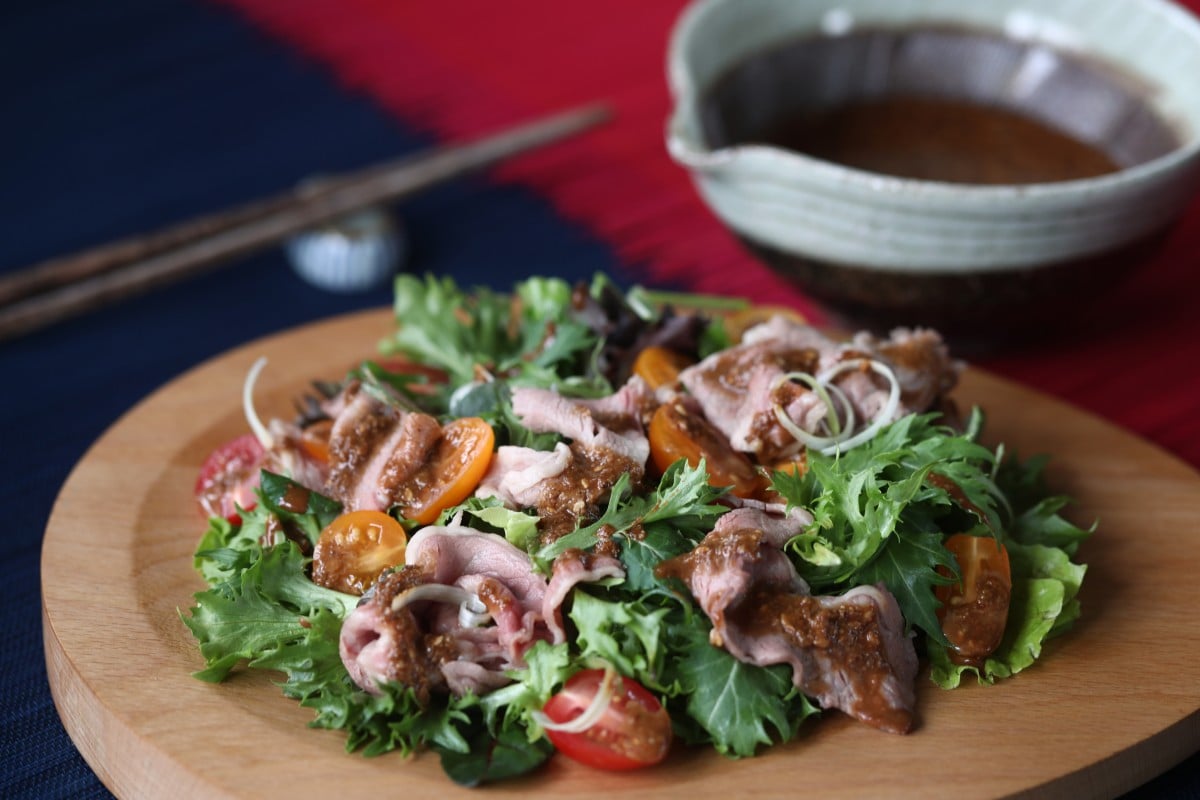 Shabu-shabu salad is a popular dish at izakaya and yakiniku restaurants. It couldn’t be easier – thinly sliced beef draped over mixed greens, with a delicious sesame-based dressing.

If you want to make this easy dish even easier, buy bottled sesame dressing - it's sold in the Japanese section of supermarkets. But the homemade version is so much better; it's not difficult to make and the leftovers keep for weeks in the fridge.

Some recipes base the homemade dressing on commercially ground sesame paste, but I prefer to start with white sesame seeds, which I toast in a small pan with a hinged mesh lid that locks into place. The screen prevents the seeds from falling out as you shake the pan over the flame; it also lets you smell the seeds as they toast, so you can remove the pan from the heat before they burn.

If you don’t have one of these pans, use a medium-sized unoiled skillet, and shake it gently over the flame while constantly stirring the sesame seeds with a wooden spoon.

To grind the toasted sesame seeds (which should be done while they are hot), I use a suribachi (grinding bowl) and a wooden stick called a surikogi - essentially a Japanese mortar and pestle. The suribachi has a roughly textured, grooved interior, and the surikogi, used in a circular motion (rather than up and down, as with a pestle), grinds the seeds to a powdery paste.

It’s slow going but almost meditative to hear the sesame seeds pop as they are being ground, and the fragrance is lovely. For faster and more efficient processing, grind the seeds in a high-speed blender, such as a NutriBullet.

Buy thinly sliced beef labelled for shabu-shabu, sukiyaki or hotpot. Don’t buy the beef for yakiniku, which is sliced too thick.

If you want to make a heartier meal, add a poached egg to each portion.

Wash the salad greens, then dry them in a salad spinner. Put them in the fridge so they stay fresh and crisp. If you don’t have a salad spinner, wash the greens, then drain them in a colander and shake off as much water as possible. Spread the greens on a clean, dry kitchen cloth and roll the cloth into a tight cylinder. Hold the cylinder firmly at the opposite ends and shake it up and down over the work surface. Unroll the towel and check the greens – they should be almost dry; if not, repeat the process with a dry towel. After unwrapping the greens, store them in the fridge.

Make the shabu-shabu sauce. Put the sesame seeds in a metal pan with hinged mesh lid (you might need to toast them in batches), or in a medium-size skillet. Shake the pan or skillet almost constantly over a low flame until the seeds are toasted and fragrant. Be patient as this takes time, and watch them carefully because they go from toasted to burnt and unusable very quickly. 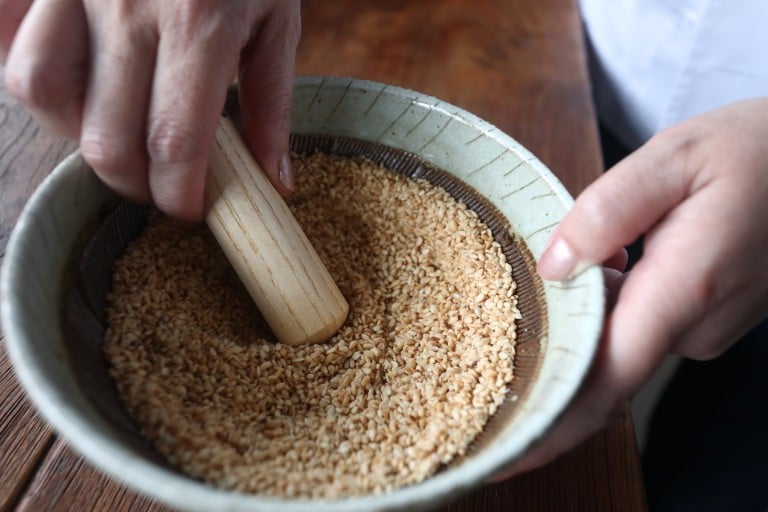 Set aside half a teaspoon of the sesame seeds, for sprinkling over the salad later. Immediately grind the remaining hot, toasted sesame seeds in a suribachi or high-speed blender. Mix in the miso, stirring until smooth, then add the soy sauce, rice wine vinegar and mayonnaise. Taste the mixture and adjust the seasonings, if necessary. Add a little chilli oil, if using. Chill the mixture until needed; it will thicken slightly when cold. Stir it just before using.

If making poached eggs, pour water in a medium-size saucepan to fill it by about three-quarters. Place the pan over a medium-high flame and bring to the boil. Stir in the white vinegar. Lower the flame so the water is at a simmer.

Crack one of the eggs into a small dish. Use a spoon to vigorously stir the water in the pan, to create a vortex. Add the egg into the centre of the vortex, then stir the water gently, taking care not to break the egg. Poach the egg for about 90 seconds, or until the yolk is softly set. Use a slotted spoon to scoop the egg from the water and drain it on paper towels. Poach the remaining eggs the same way.

Wash the pan used to cook the eggs, then fill it three-quarters with water. Place the pan over a medium-high flame and bring to the boil. Poach the beef several slices at a time. Take care not to overcook the meat – it should just lose its pink colour. Drain the pieces on paper towels.

Divide the salad greens between two plates (if serving as a main course) or four plates (if serving as an appetiser). Drape the poached beef slices over the greens then add the cherry tomatoes and the poached eggs, if using. Drizzle with some of the shabu-shabu sauce. Sprinkle with the reserved sesame seeds and some shichimi togarashi, then serve with more of the dressing on the side.

8/8
Susan Jung Japanese Appetiser Beef Vegetables Eggs Low-Carb Dairy-Free Keto Kosher No-Sugar Peanut-Free Easy
Diet definitions
Liking this recipe?
Now you can save the recipe you into your own collection.
Find us on facebook
Join our community and get the latest recipes from all over Asia for you to make at home.