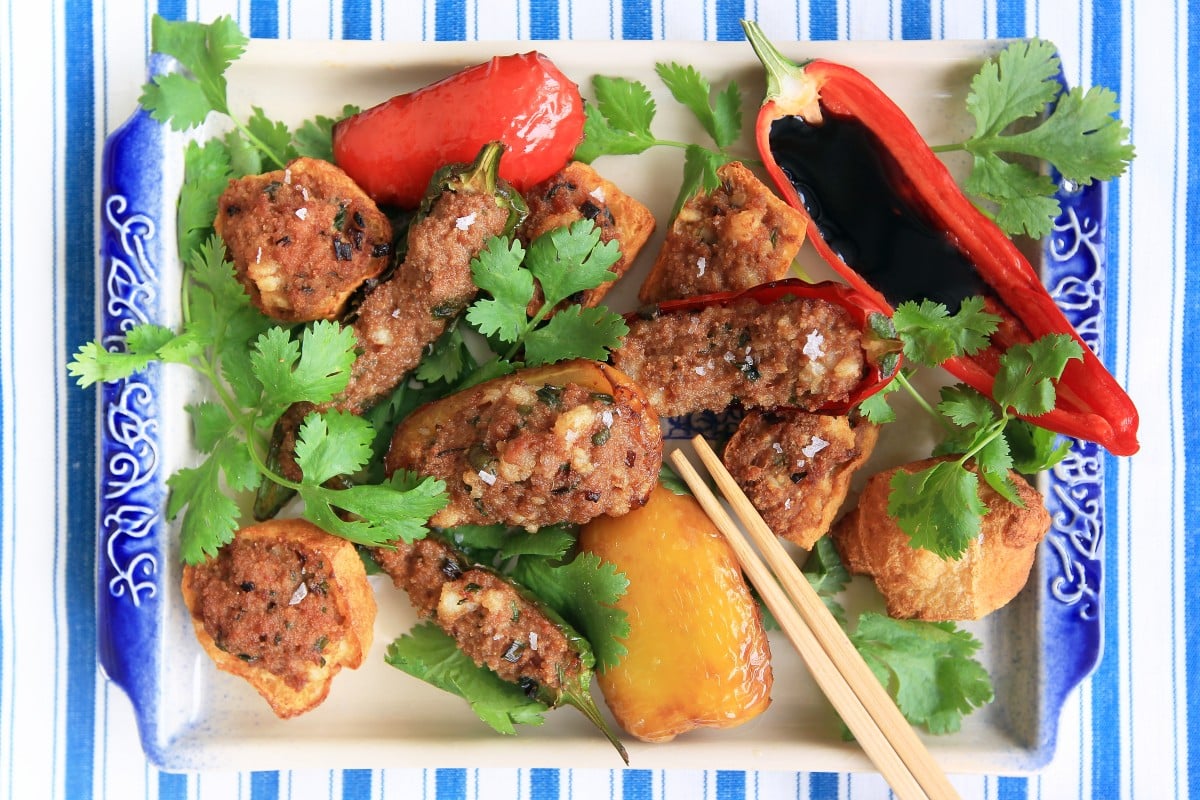 This is one of my favourite snacks at Chinese fast-food shops - the kind that also sell gai dan jai ("little chicken eggs"), waffles with condensed milk, and deep-fried intestines, but it's hard to find really good ones. Often, the vegetables are greasy and taste of over-used oil. This version is much better.

Remove the heads and shells from the shrimp (save them, to make shrimp stock or shrimp oil, for another dish). Cut a slit down the back of the shrimp, then remove and discard the black vein. Finely chop the shrimp.

Thoroughly rinse the water chestnuts then finely dice them. Finely mince the ginger and spring onions, and chop the fresh coriander.

Make a small patty out of the meat mixture and fry it in a small skillet, then taste. Correct the seasonings, if necessary.

If using bell peppers, cut them in half and remove the core, stem and seeds. Use paper towels to dry the cavity (this makes the meat adhere better). Cut each half into four to six pieces (depending on size), then pack the meat into the cavity, mounding it slightly.

For banana chillies, cut them in half lengthwise and remove the core and seeds, but leave the stem intact. Dry the cavity then pack the filling into it.

If using eggplant, cut it in the diagonal into slices about 1cm (7/16 in) thick. Lay the pieces on a work surface and, slicing parallel to the work surface, cut each piece each almost in half, leaving it intact at one end. Open each piece slightly and pack in the stuffing.

For fresh mushrooms, remove the stem (which can be chopped and added to the filling, if you don't want to waste it) and fill the cap with the meat.

For fried bean curd, cut each piece in half on the diagonal and pack the meat over the exposed part.

Pour oil to a depth of about 3cm (1¼ in) in a skillet, and heat to 180°C (350°F). Dredge each piece of meat-stuffed vegetable (or bean curd) in cornstarch, shake off the excess, then place meat-side down in the hot oil. Fry for about three to five minutes, turning the pieces over as necessary, until the filling is cooked through. Drain on paper towels.

Pour the brown vinegar into individual dipping bowls and add some ginger and chilli sauce, then serve with the fried stuffed vegetables. Accompany them with steamed rice and stir-fried green vegetables.

7/7
Susan Jung Chinese Dinner Pork Vegetables Low-Carb Dairy-Free Keto Peanut-Free Easy
Diet definitions
Liking this recipe?
Now you can save the recipe you into your own collection.
Find us on facebook
Join our community and get the latest recipes from all over Asia for you to make at home.