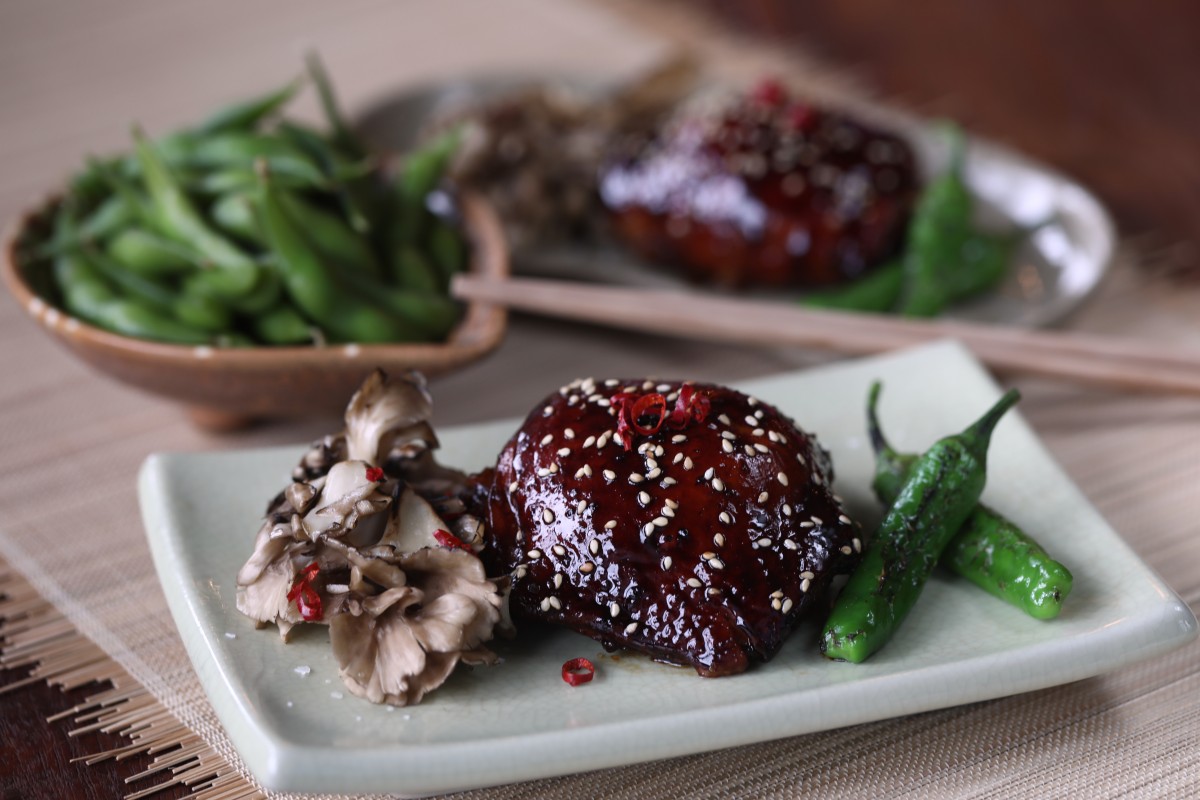 Despite its name, in most teriyaki recipes the chicken doesn’t go anywhere near the yaki (grill). Many recipes call for the meat to marinate for several hours, or overnight, but I wanted a dish I could have on the table within an hour.

I use a mixture of cooking techniques, none of which are difficult. I pan-fry the meat, skin-side down, to crisp up the skin, then simmer it briefly on the stovetop, basting often, which softens the skin but gives it flavour. It goes into the oven to be cooked under the grill, which re-crisps the skin and turns it almost black (because of the soy sauce) so it looks burned, but isn’t. While the chicken is resting briefly on a cutting board, I reduce the sauce to a nice, shiny glaze, which is delicious drizzled over the meat and steamed rice.

This can be made with skin-on chicken thighs or breasts.

Pour the soy sauce and sake into a medium-sized saucepan. Lay the ginger on a cutting board and whack it with the side of a cleaver or chef's knife to crush it lightly. Cut the garlic cloves in half, then put the pieces along with the ginger and the sugar into the pan. Bring to a boil then lower the heat and simmer for 10 minutes, stirring occasionally. Turn off the flame.

Preheat the oven grill to high and place a rack about 10cm (4in) below the heating element.

Heat two 30cm (12in) skillets, preferably cast-iron, over a high flame, then rub them lightly with oil. When the skillets are very hot, add the chicken breasts or thighs, skin-side down, with four pieces in each pan. Sear the chicken without touching it for five minutes, or until the skin is crisp. Remove the pieces from the pan, placing them skin-side up on a tray or plate.

Use a large slotted ladle to scoop the ginger and garlic out of the soy sauce mixture. Wash and dry the skillets used to sear the chicken. 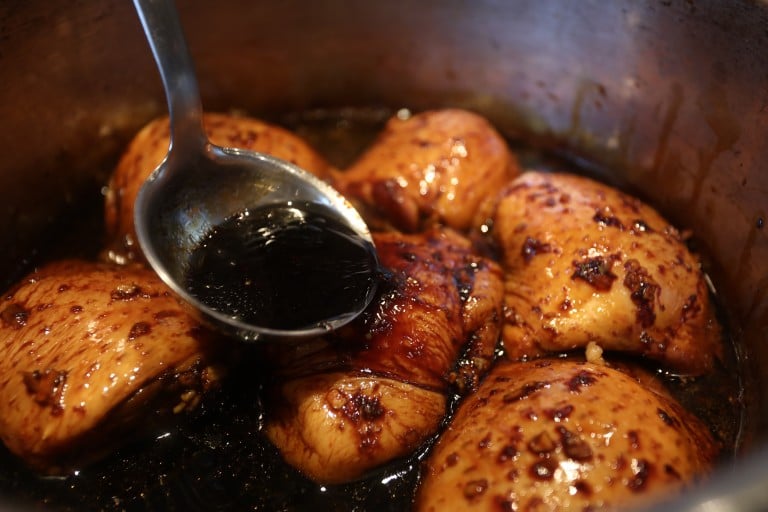 One at a time, place each skillet in the oven, as close as possible to the heat, to crisp up the skin. The skin will blister and become very dark, almost black, but shouldn’t smell burned. Each skillet will need only about 30-60 seconds very close to the heat; turn the chicken pieces as needed so they blister evenly.

Place the chicken pieces on a large, dry cutting board and let them rest briefly while reducing the sauce.

Place each skillet over a medium-high flame. Simmer the liquid for about five minutes, or until it is reduced to a light, shiny glaze.

Sprinkle sesame seeds and chilli flakes, or shredded chilli, over the chicken. You can serve the chicken pieces whole (to be eaten with a knife and fork) or cut into thick slices (for chopsticks). Serve with steamed rice, the glaze, and vegetables of your choice.

9/9
Susan Jung Japanese Dinner Poultry Dairy-Free Kosher Peanut-Free Easy
Diet definitions
Liking this recipe?
Now you can save the recipe you into your own collection.
Find us on facebook
Join our community and get the latest recipes from all over Asia for you to make at home.