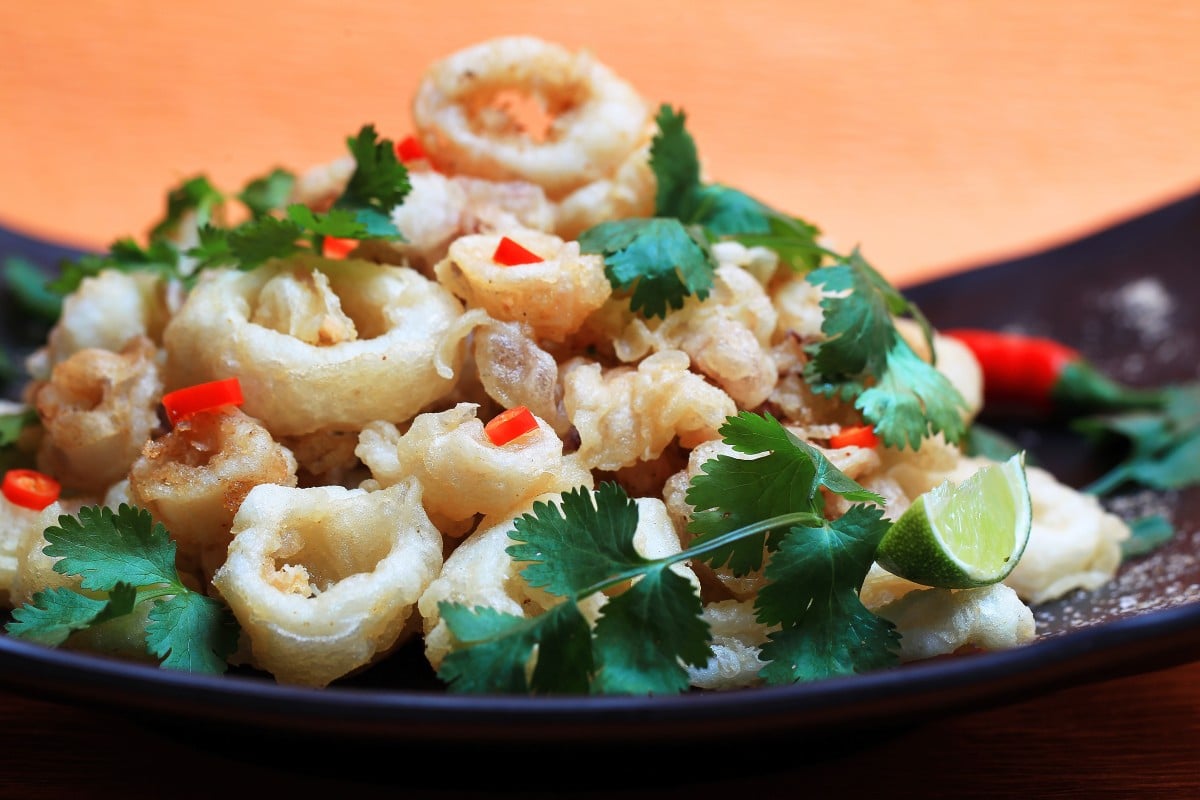 There are many versions of this dish, the worst of which is the thickly battered frozen squid rings sold as a snack in many bars, which are a waste of stomach space. When I make fried squid, I don't bother with using a batter, because the moisture of the squid combined with the flour and cornstarch creates a nice light coating. The trick of turning the squid rings inside out is something food stylist Nellie Ming Lee taught me - it means they stay round, rather than collapsing.

If the thought of cleaning squid is off-putting, ask the seafood vendor to do it for you. You'll have to pay a lot more, though.

After mixing together the salt pepper and five-spice powder, half will be used to season the squid, while the remainder will be mixed with fresh lime juice, to use as a dipping sauce.

In a small bowl, thoroughly combine the salt, white pepper and five-spice powder. In another bowl, mix together the flour and cornstarch.

Roughly chop the garlic cloves. Cut the chillies into thin rings, shaking out and discarding the seeds as you go.

Clean the squid. Pull the tentacles and head from the body - most of the guts will come out of the cavity at the same time. Use a sharp knife to separate the head from the tentacles; discard the head and guts. Pull the transparent quill from the body and fish around with your finger inside the cavity to make sure it's completely clean. Pull off and discard the purple skin from the body. Rinse the body pieces inside and out, then cut them into rings about 8mm ( ⅜ inch) wide. Turn the rings inside out. Put the squid rings and tentacles into a colander and drain briefly, then transfer them to a bowl. Sprinkle with the flour and cornstarch and mix thoroughly, then shake off the excess flour/starch.

Pour oil to a depth of about 6cm (2⅓ inch) in a wok and heat it to 180 degrees Celsius (350 degrees Fahrenheit). Fry the squid rings and tentacles in batches - do not crowd the pan. The squid take only about two minutes to cook. Scoop the pieces from the wok and drain them on paper towels.

After cooking all the squid, pour off as much oil as possible from the wok, but do not wash it. Heat the wok over a high flame, add the garlic and chilli and stir-fry for about 30 seconds.

Add all the squid back to the wok, sprinkle with half of the spiced-salt mixture and stir to combine. Transfer the ingredients to a serving platter and garnish with coriander sprigs.

Put the remaining spiced-salt mixture in a small bowl and squeeze lime juice over it. Mix to form a loose paste, and serve as a dipping sauce.

7/7
Susan Jung Vietnamese Dinner Easy
Liking this recipe?
Now you can save the recipe you into your own collection.
Find us on facebook
Join our community and get the latest recipes from all over Asia for you to make at home.