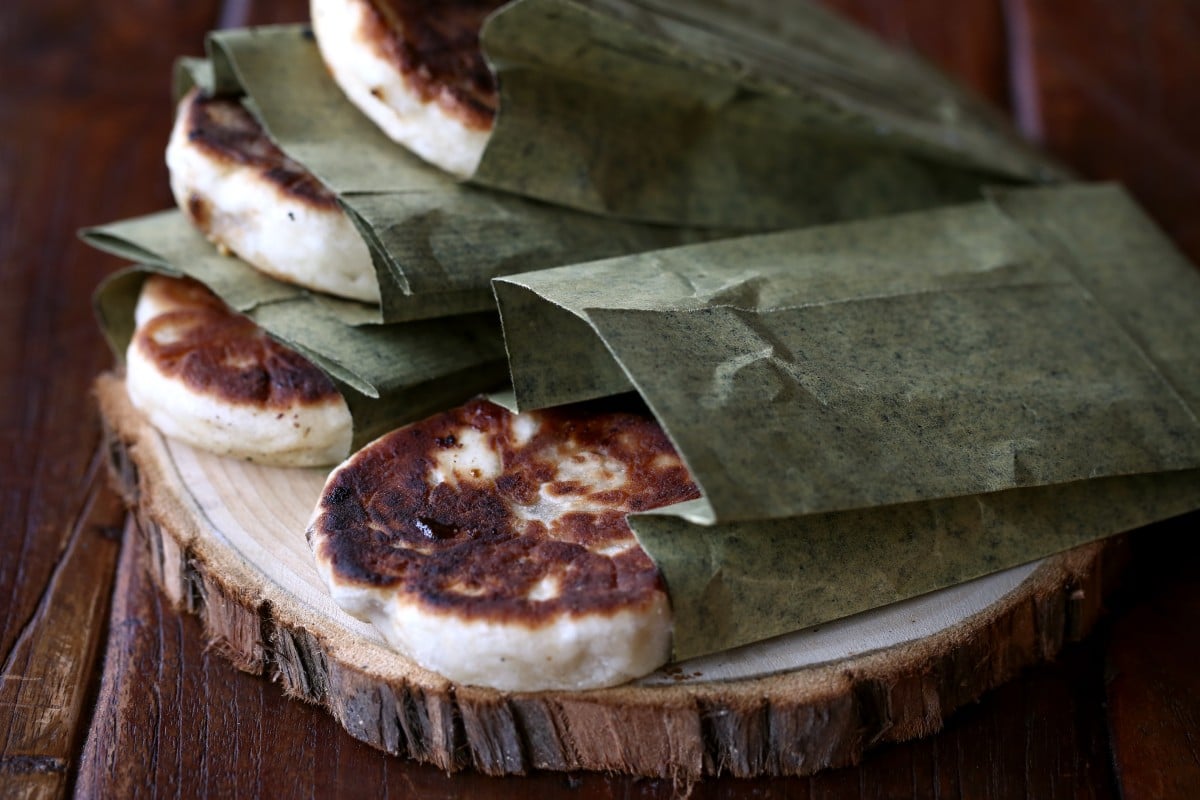 Although South Korea isn’t nearly as famous for its street food as Thailand or Vietnam, vendors there still offer a great variety of inexpensive and delicious food.

I’ve also eaten hotteok, which I think may be available only in winter. These little pancakes are usually filled with cinnamon-flavoured sugar and nuts – the sugar becomes molten hot as it cooks.

They make great hand warmers in the frigid cold because the sugar stays hot for a long time, but eventually you’ll give in to temptation and eat them.

The vendor making hotteok will probably warn you to bite into it carefully, so you don’t burn your mouth on the molten sugar.

Probably the hardest part of making hotteok is control­ling the heat under the pan. If the flame is too high, or there are hotspots, the hotteok will scorch before they are cooked through; if it is too low, the dough will be pale, not an appetising brown. If you have an electric skillet, use it to cook the hotteok, because the heat is evenly distributed.

If you are cooking them over a gas flame, watch the hotteok carefully and move them around in the pan as necessary, so none are in a hotspot for too long.

You can use other types of nuts in place of the walnuts. You can also add a teaspoon of sesame seeds to the filling.

I like to use dark muscovado sugar in the filling, because the stronger molasses taste makes the hotteok seem less sweet. You can substitute another type of soft brown sugar.

Make the dough. Put the yeast in a small bowl, add 15ml (1 tbsp) of tepid water and stir well. 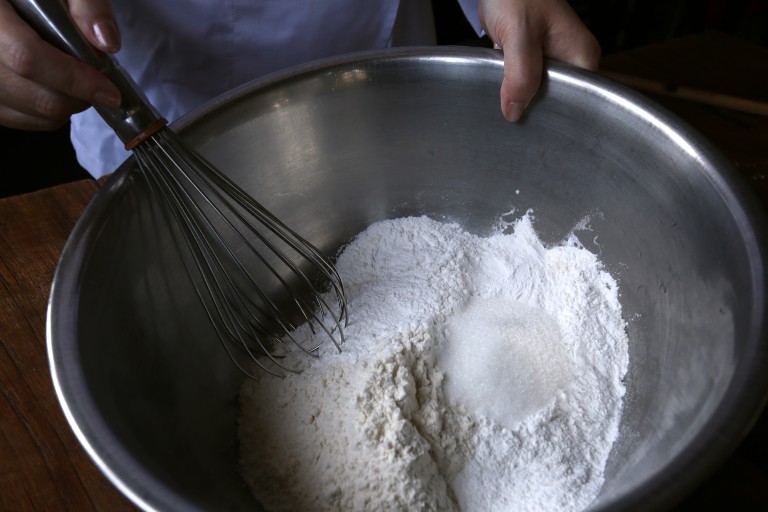 Put the flours in a bowl and mix in the sugar and salt. Pour in 175ml (¾ cup, minus 1 tsp) of tepid water, the cooking oil and the yeast. Mix well to form a dough that holds its shape and is just slightly damp – it shouldn’t stick too much to your hands. If the dough is too sticky, add a little more flour; if it’s dry, mix in a small amount of water.

Cover the bowl and let the dough rise for 60 to 90 minutes. It will be puffy and light but won’t double in size. 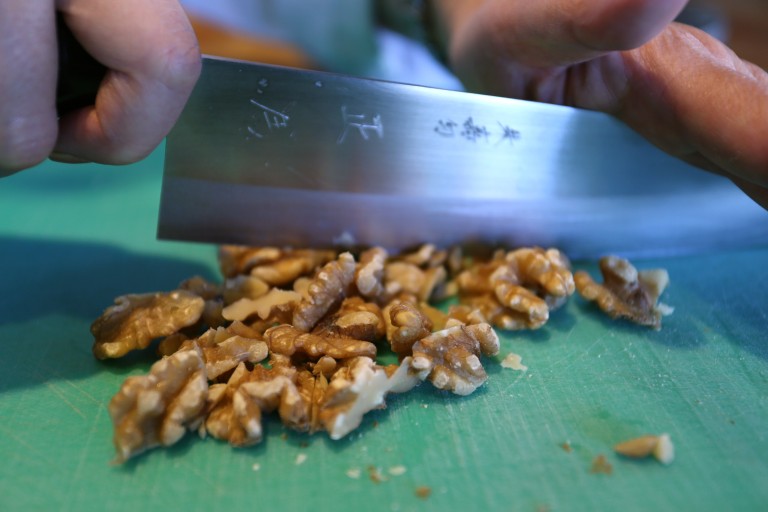 While the dough is resting, make the filling. Finely chop the walnuts and mix them with the sugar and ground cinnamon. 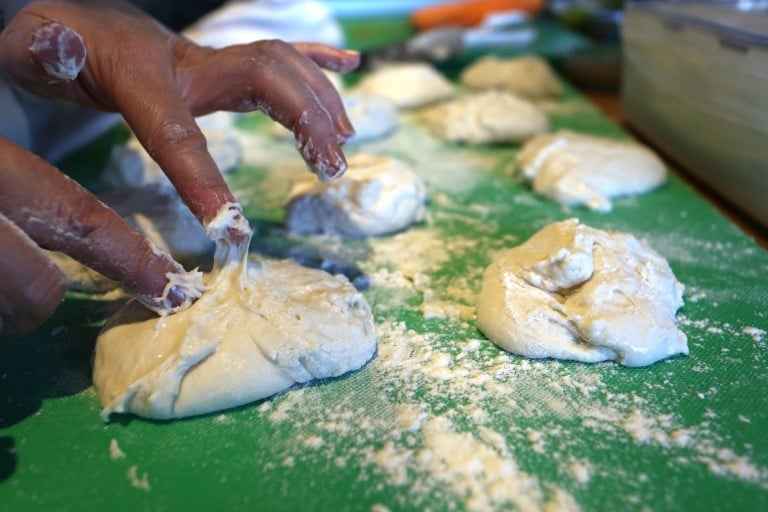 When the dough is light and puffy, divide it into eight equal portions. Shape the pieces of dough into tight balls and place them on the worktop.

Flatten a ball of dough, then use your hands to shape it into a disc that’s about 9cm (3½ inches) in diameter and slightly thicker in the middle. Use just enough flour on the work surface and your hands so the dough doesn’t stick. 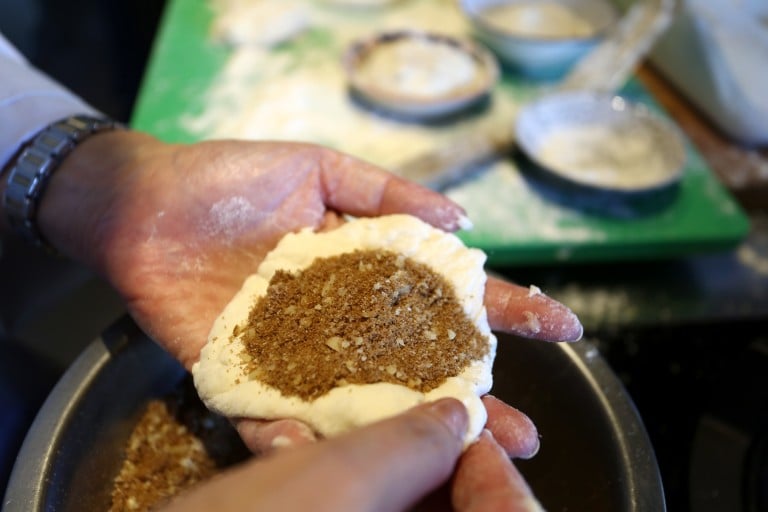 Cup the disc of dough in your left hand (if you are right-handed). Take a spoonful of the filling and place in the centre of the disc. Holding down the filling with your left thumb, bring the edges of the dough slightly over the filling. Pleat the edges, keeping the dough in a circular shape, until the filling is completely enclosed, with nothing spilling out.

Place the ball of dough seam-side down on the work surface and flatten it with the palm of your hand, before shaping and filling three more pieces of dough.

Heat a skillet over a low-medium flame. Lightly coat the skillet with oil. 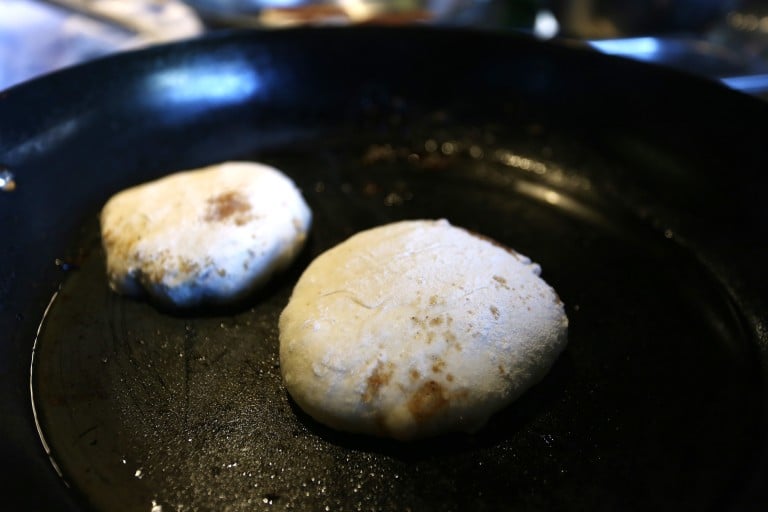 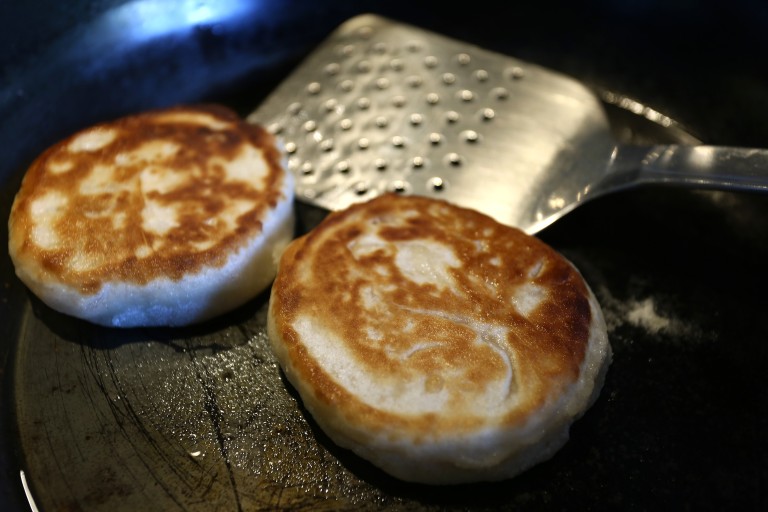 Flip the hotteok over and cook until the other sides are medium brown. They should take about eight minutes in total to cook. While the first four hotteok are cooking, shape and fill the remaining pieces of dough. You might have a little filling left over.

When the first four hotteok are ready, lift them out of the skillet. Lightly oil the skillet and cook the four remaining hotteok the same way.

Serve the hotteok hot, but warn your guests to be care­ful when they bite into them. Leftover hotteok can be reheated in a skillet, for about two minutes on each side.

13/13
Susan Jung Korean Dessert Dairy-Free Kosher Peanut-Free Pescatarian Vegan Vegetarian Medium
Diet definitions
Liking this recipe?
Now you can save the recipe you into your own collection.
Find us on facebook
Join our community and get the latest recipes from all over Asia for you to make at home.