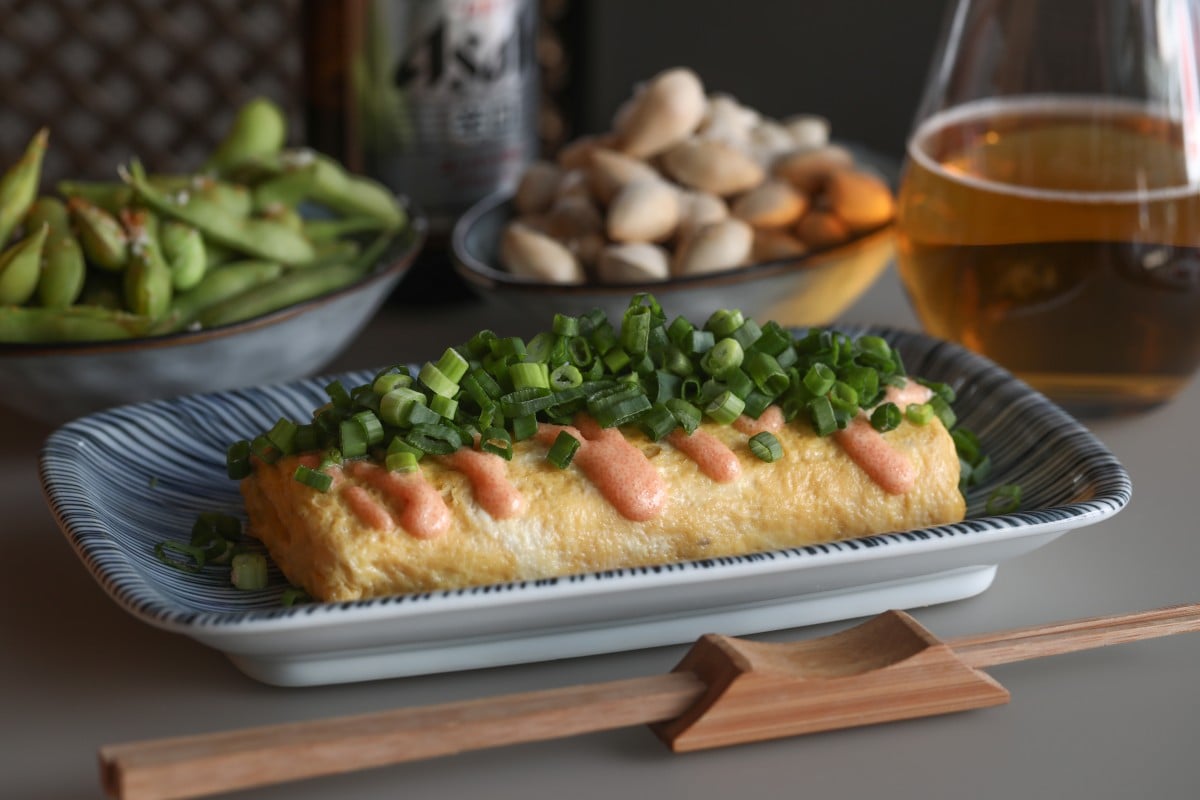 Tamagoyaki translates as “grilled egg”, although most of the time it’s prepared in a special rectangular pan, instead of on a griddle.

It’s a little tricky to make, especially the first layer. Chefs roll it by flipping the pan with a flick of the wrist, using chopsticks to guide the egg so it rolls over on itself. I cheat, and use a metal spatula to roll the egg. Your first rolled tamagoyaki might look misshapen, but you’ll soon get the hang of it, and anyway, it will still taste good. Resist putting in too much filling, though, or it will ooze out of the sides.

This recipe combines two versions that have stood out in my taste memory. I ate one at an okonomiyaki restaurant in Shimonoseki, in Japan, and the other at a kushiyaki (fried skewers) place called JunG39, in Hong Kong. The first was rolled around cheese and shiso leaf, and the chef cooked it by pouring the egg in a long, somewhat nebulous shape onto a griddle instead of using a tamagoyaki pan. He managed to roll the egg into a surprisingly neat rectangular shape, scattered tenkasu (fried tempura batter bits, also called agedama) on top, then poured dashi broth over it. While it wouldn’t win points for looks, it tasted delicious. The version at JunG39 was rolled around mentaiko and cheese, then drizzled with mentaiko mayo.

Use inexpensive low-moisture mozzarella for this – the pre-grated kind is perfect. You can also use individually wrapped cheese slices.

This recipe calls for dashi broth to flavour the eggs; the instant granules (hondashi) dissolved in hot water is fine. The best soy sauce for tamagoyaki is white soy sauce (which is actually pale gold) because it won’t discolour the egg. If you don’t have it, use light soy sauce.

Break the eggs into a bowl and stir with a pair of chopsticks to combine the yolks and whites while incorporating as little air as possible. 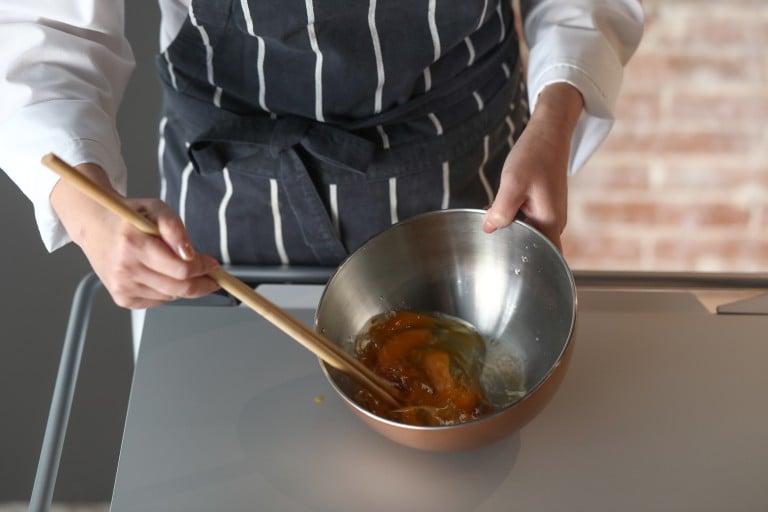 In a cup, mix the dashi with the mirin, soy sauce and sugar, stirring until the sugar is dissolved. Add this to the bowl with the eggs, mixing until just combined. 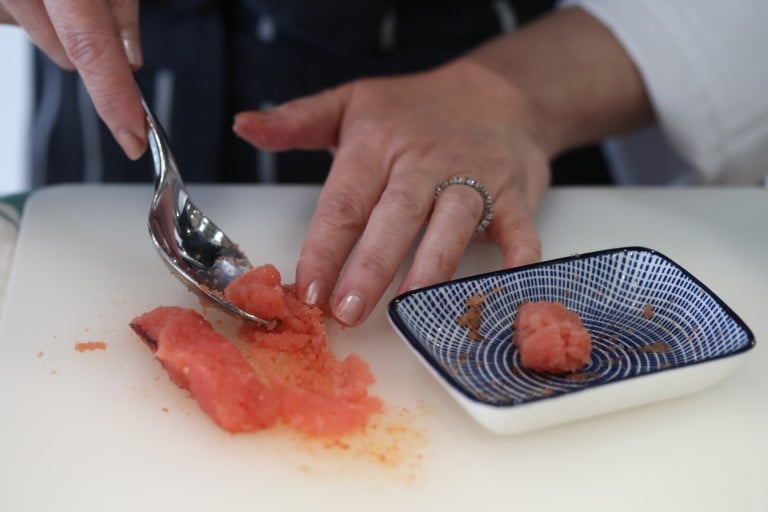 Cut the sac of mentaiko in half and scrape the fish eggs out of the membrane. Put about one-third of the eggs into a small dish, add the mayonnaise and stir together.

Place the egg mixture, cheese, mentaiko and shiso leaves near the stove. Pour cooking oil into a small dish.

Heat a tamagoyaki pan or skillet over a medium-low flame and, when it’s hot, pour in a little cooking oil. Use a folded paper towel to rub the oil into the entire pan, coating it evenly but lightly. Put the paper towel in the dish with the oil. As you’re making the omelette, lightly oil the pan before each addition of egg, and continually adjust the heat under the pan so the omelette doesn’t cook too fast or brown too much – at most it should be pale golden. 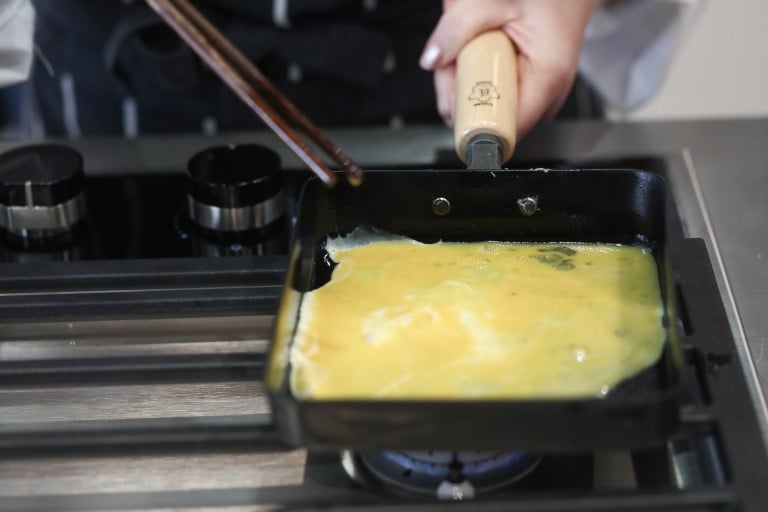 When the oil is hot, pour in about one-quarter to one-third of the egg mixture, or enough to coat the pan in a thin layer. Tilt the pan as necessary, so the egg layer is even. When the egg sets on the bottom, but is moist on top, remove the pan from the heat. 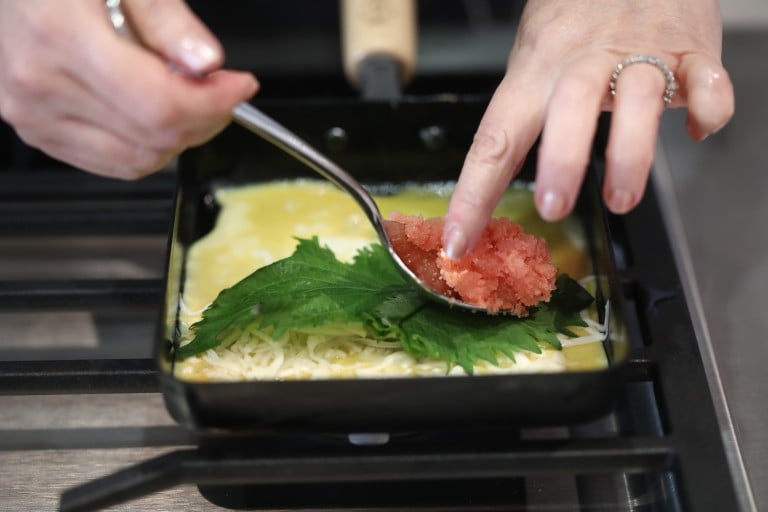 Quickly sprinkle the cheese over about one-quarter of the egg layer starting 2cm (⅞ in) away from the far side of the pan and leaving a thin border at the sides. Place the shiso leaves over the cheese, overlapping them if necessary, then spoon the mentaiko on top in a narrow strip - about 1.5cm (⅝ in) - across the width of the pan. 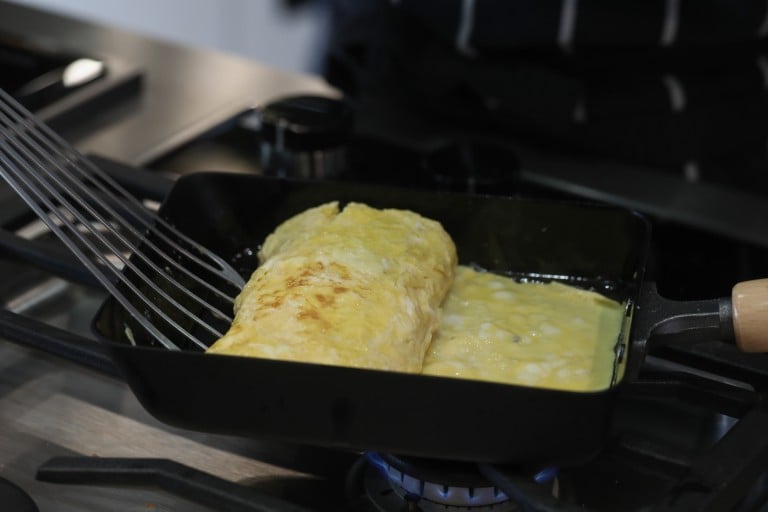 Return the pan to the heat. Starting at the far side of the pan, flip up the 2cm (⅞ in) edge over the cheese, shiso and mentaiko, then continue to roll the omelette towards you so that the ingredients are fully encased. When you get to the near side of the pan, use a spatula (or chopsticks) to press the omelette against the edge, to help shape it and square it off.

Use the oiled paper towel to lightly oil the exposed part of the pan. Push the omelette to the far side; again, pressing it against the edge of the pan to shape it. Oil the near side of the pan with the paper towel. 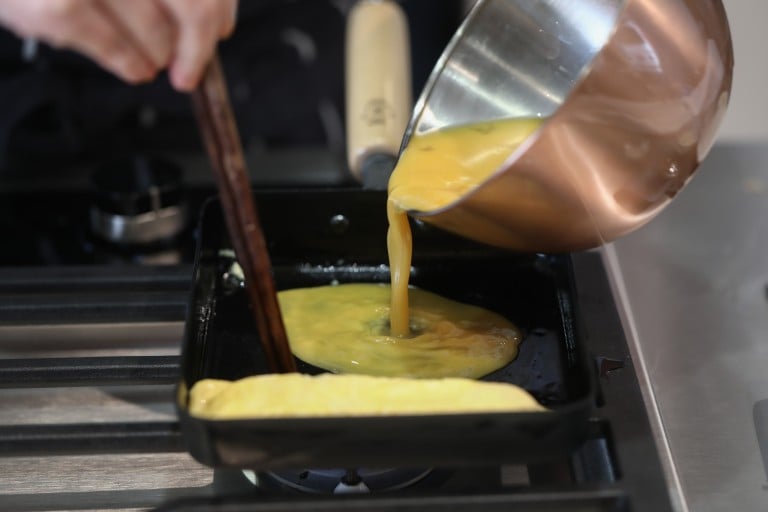 Pour in enough egg mixture to coat the pan – you’ll need less for this layer. Tilt the pan away from you and lift the near side of the omelette so a little of the new layer of egg flows under it.

When this layer of egg is set on the bottom but still moist on the surface, start rolling the omelette over it, again, starting at the far side.

Continue to cook and roll the omelette, adding as much egg as necessary to make thin layers, and oiling the pan between each addition. I usually get four layers, but you may get more or fewer, depending on the size of your pan - mine is 19cm (7½ in) long and 14cm (5½ in) wide. 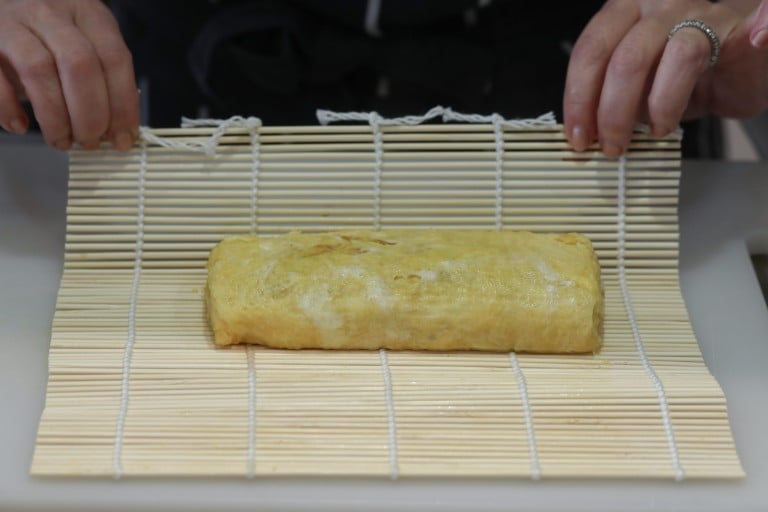 Lift the omelette out of the pan onto a sushi mat. Roll it in the sushi mat and press lightly, to even out the shape, then unroll it and place it on a serving dish.

Drizzle or spread the mentaiko mayonnaise over the omelette, then scatter with the optional toppings. Cut into five or six pieces and serve hot.

15/15
Japanese Main Course Eggs Medium
Liking this recipe?
Now you can save the recipe you into your own collection.
Find us on facebook
Join our community and get the latest recipes from all over Asia for you to make at home.