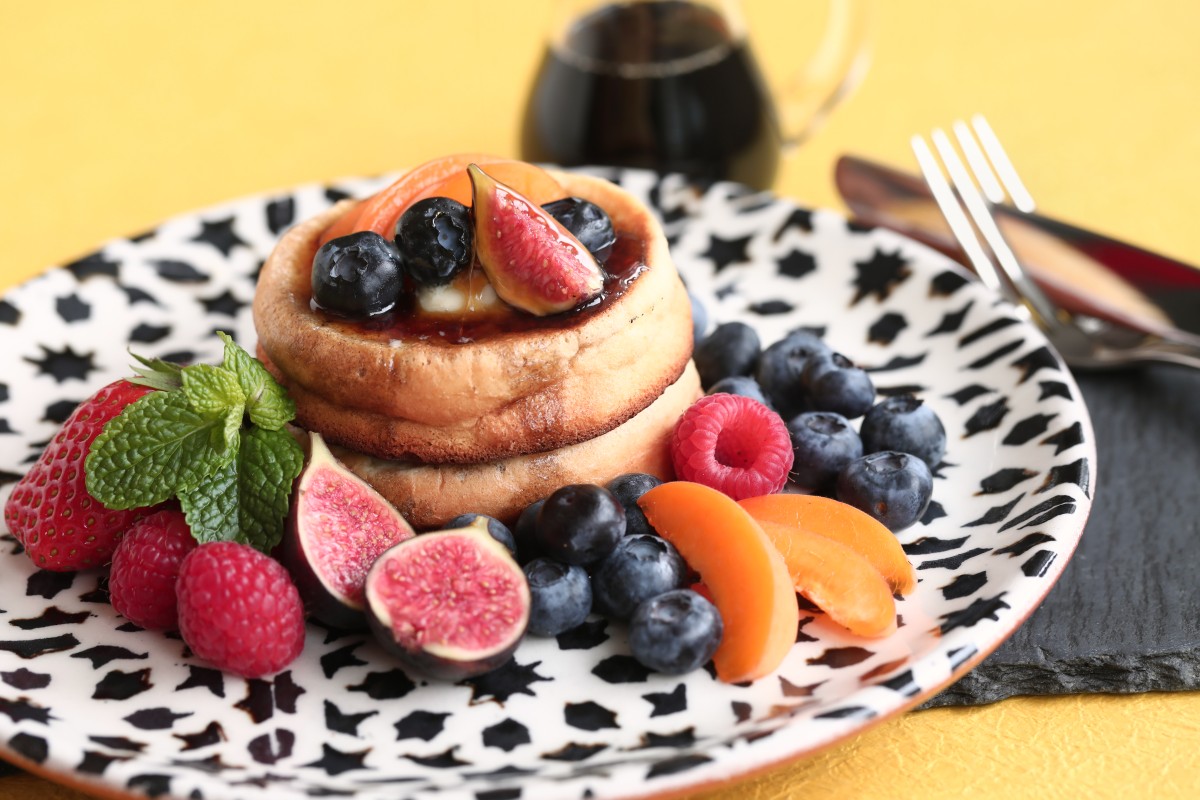 Trust the Japanese to turn a simple breakfast into something special. Don’t make this for a crowd – the batter deflates quickly. If you’re cooking for more than two or three, prepare each batch separately and cook immedi­ately, or the pancakes won’t be as light.

Souffle pancakes differ from other types of pancake because of the way they are mixed. Instead of just whisking all the ingredients together, the eggs are separated and the whites are whipped before being folded in gently, so when cooked, the pancakes puff up.

The batter is not difficult to make, but it can be tricky to cook. It works best in an electric griddle, which gives an even, controlled heat, without hot spots. If you don't have one, use two skillets with lids, which lets you cook all the batter at once so it doesn't have time to deflate. Heat the skillets in a preheated 160°C (320°F) oven, before cooking the pancakes on the stove top. Once the batter is in the skillets on the stove, you'll need to move the pans around over the flame to even the heat. If you have an infrared thermometer, use it to check the pans for hot spots.

You can cook the pancakes free-form, or use ring moulds, which makes them neater. The ring moulds should be about 8.5cm (3⅓in) in diameter and 3cm (1¼in) high. You can make them a little smaller, but they should not be larger or the outside of the pancakes will burn before the inside is cooked.

This recipe uses whipped chilled egg whites. Most of the time, you beat egg whites that are at room tem­per­ature, because they whip up faster. But while cold egg whites take longer to whip, they keep their volume for a little longer.

Top these pancakes with a pat of butter, some fresh fruit and either kuromitsu (Japanese black sugar syrup) or maple syrup.

Separate the eggs, putting the yolks in one mixing bowl and the whites in another. Put the egg whites in the fridge.

Melt the butter, either in a bowl in the microwave, or in a pan on the stove. Cool it to tepid.

Whisk the egg yolks then add the melted butter, the sour cream and lemon zest. Whisk until smooth.

Sift the cake flour into a medium-size mixing bowl. Add the egg yolk-butter-sour cream mixture and whisk until the ingredients are just combined; do not overmix. 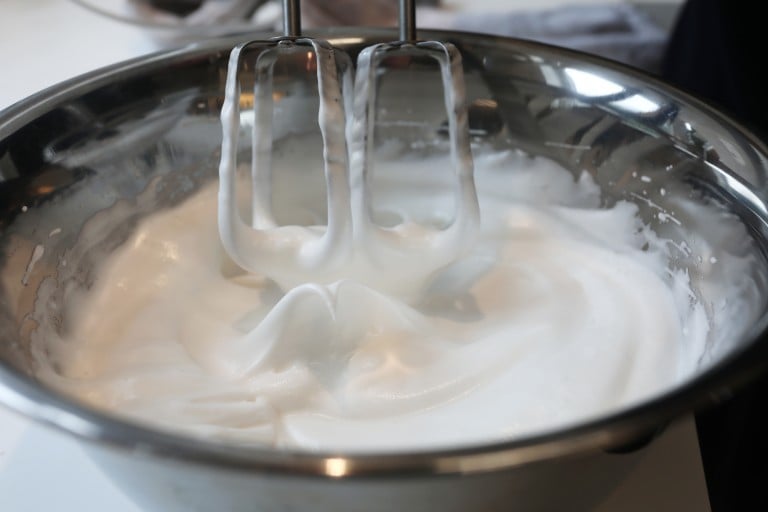 Add about one-quarter of the egg whites to the egg yolk/flour mixture (which will be very thick) and use a spatula to quickly mix the ingredients together. Gently fold in the remaining whites in two additions, trying to maintain as much volume as possible. 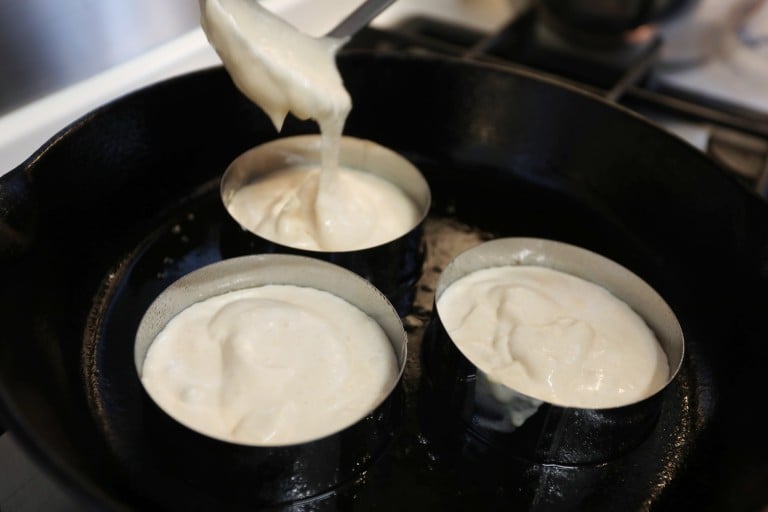 If using ring moulds, put three in each skillet, leaving space between each one (or, if using an electric griddle, place all the rings in the griddle). Spray the pans (or griddle) and the interior of the moulds with pan-coating. (For free-form pancakes, just spray the pan before ladling in the batter.) Place the pans over a medium-low flame and move them around as necessary so they heat evenly. Try to maintain the heat so it's 160°C/320°F.

Divide the batter between the six moulds – it should fill them about halfway to three-quarters. Cover the pans (or griddle) with the lid and cook at 160°C/320°F over a medium-low flame for about three to four minutes. With both the skillets and the griddle, turn down the heat, if necessary, if the pancakes start to burn. Continue to move and rotate the pans around over the flame to minimise the hot spots.

The pancakes will start to dry out around the sides, and small bubbles will form around the edges. When the pancakes are set on the bottom, they're read to flip. If using ring moulds, it's easiet to remove the mould before flipping the pancakes - by now, their shape should be stable. Flip them over and let them cook for another minute or two, until the bottom is firm but the pancakes are still a little wobbly.

Put the pancakes on plates, stacking them two to three high. Serve immediately with a pat of butter (if you like), some kuromitsu or maple syrup, and fresh fruit. Serves two or three.

11/11
Susan Jung Japanese Breakfast Eggs Kosher Peanut-Free Pescatarian Vegetarian Medium
Diet definitions
Liking this recipe?
Now you can save the recipe you into your own collection.
Find us on facebook
Join our community and get the latest recipes from all over Asia for you to make at home.