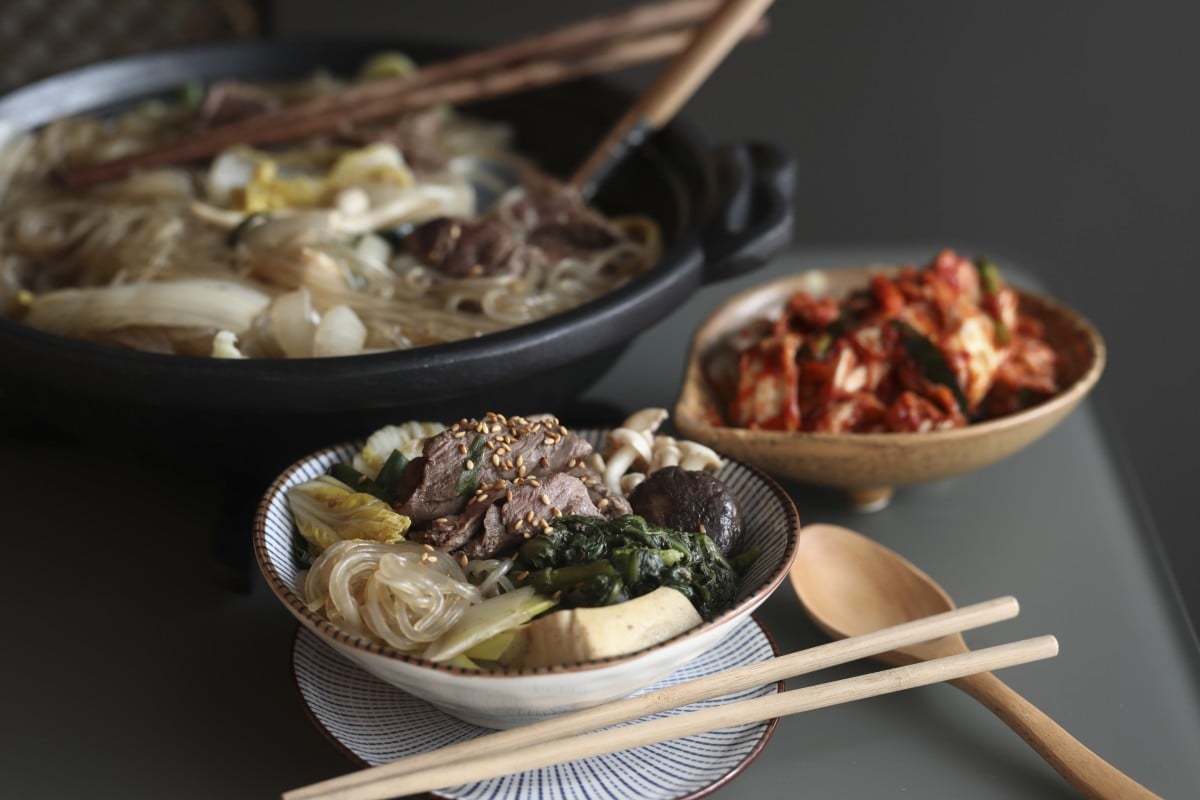 As much as I love Chinese hotpot, it’s a lot of work, primarily because there are so many ingredients to prepare, and so many dishes to wash up afterwards. Everyone sits around the table, using little wire baskets to dip their chosen raw items into the bubbling vat of broth.

Jeongol is a Korean style of hotpot, but the ingredients are simmered together and it’s all shared – there’s no arguing about who “owns” the piece of meat or fish that fell out of the basket and is now up for grabs. With jeongol, each diner picks out what they want from the communal vat.

If you have a portable burner, arrange all the ingredients in the pot, pour in some of the hot broth, then cook it at the dining table, adding more broth and other ingredients as necessary.

As with all types of hotpot, the broth is important. But making beef broth for beef jeongol is a big commit­ment – you need hours (and a very large pot) to simmer bones and other ingredients. If you have the time, by all means make your own beef broth, but if you don’t, that’s OK.

Korean markets sell all types of packaged beef broth: granules (which I find one-dimensional), concentrates that come in little plastic packets ready to be diluted, and my favourite - ready-to-use packets of seasoned broth. Whichever type you use, it’s good to simmer the broth with a few extra ingredients. If possible, use soup soy sauce to season the broth; it’s pale in colour but has a strong umami flavour. Regular soy sauce, even light soy sauce, will turn the broth a muddy brown.

Because most of the ingredients are cooked at once, you need a fairly large pot: for three to four people, use a wide, shallow pot that holds two litres to 2.5 litres. If the ingredients don’t all fit into the pot together, it is fine to cook half of them and add the remainder when there is space.

Towards the end of the meal, after cooking most of the ingredients, I like to add more boiling broth (or plain water) to the pot and simmer noodles and/or frozen mandu (Korean dumplings), to eat with the soup.

I usually make my own marinade for the beef, but you can also buy bottled bulgogi marinade. The commercial marinade is saltier and sweeter than the home-made version.

If you are serving this to big meat lovers, you might want to double the amount of beef and marinade. Put half of the beef in the pot for the initial cooking, then add the remainder after the first portion has been eaten.

Marinate the beef. Roughly chop the apple, garlic, ginger and spring onions and put them in the bowl of a food processor or blender. Add the soy sauce, rice wine, corn syrup, sesame oil and salt, and blend to a purée.

Put the beef into a bowl, add the marinade, then mix. Marinate at room temperature, for at least 30 minutes, while preparing the other ingredients. If you are using a commercial marinade, pour 250ml (1 cup) of the marinade over the beef and mix thoroughly. 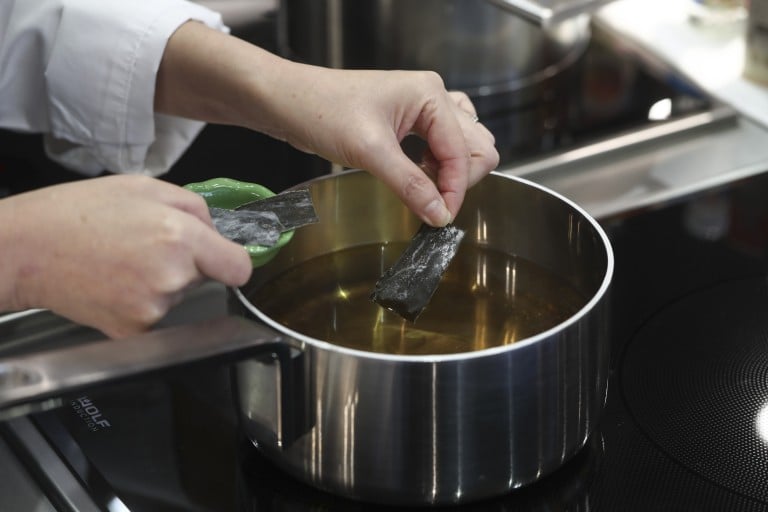 Make the broth. Pour the beef broth into a medium-size saucepan, add 200ml (¾ cup plus 1 tbsp) of cold water and bring to a boil over a medium flame.

Cut the white radish lengthwise into halves or quarters, then slice about 5mm (¼ in) thick. Thoroughly wash the leeks, then cut off the white and pale green parts and set them aside. Cut the dark green leek leaves into large pieces.

Add the white radish and leek tops to the broth and simmer over a low flame for 10 minutes. Add the dried kelp pieces and simmer for one minute. Use chopsticks to remove the kelp and leek tops. Taste the broth and add soup soy sauce and/or fish sauce, to taste. It should taste a little strong on its own.

Cut the onion in half, then slice it into pieces about 1cm wide (⅜ in). Place these in the bottom of a pot. 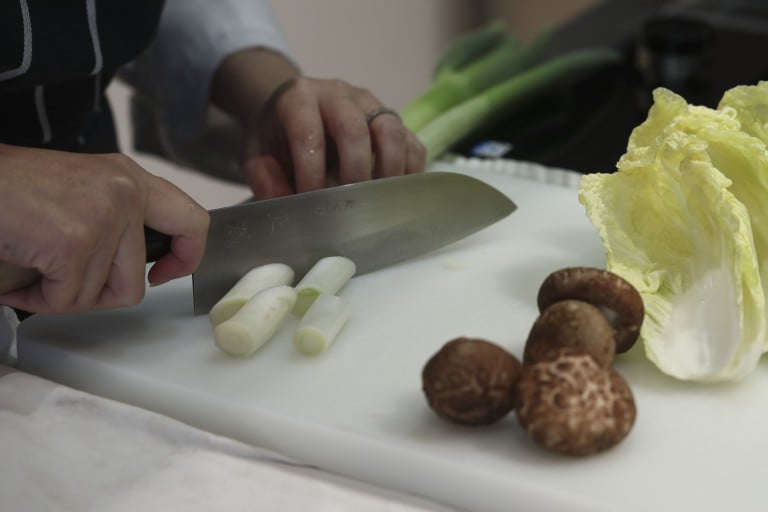 Cut the white and pale green parts of the leeks into 2.5cm (1 in) pieces. Cut off and discard the woody part of the shimeji mushrooms, then break them into clumps. Trim off and discard the tough stem ends of the chives. Cut the chives and spring onions into 3cm (1¼ in) pieces. Thoroughly rinse the chrysanthemum leaves, then drain them. Slice each block of bean curd into six pieces. 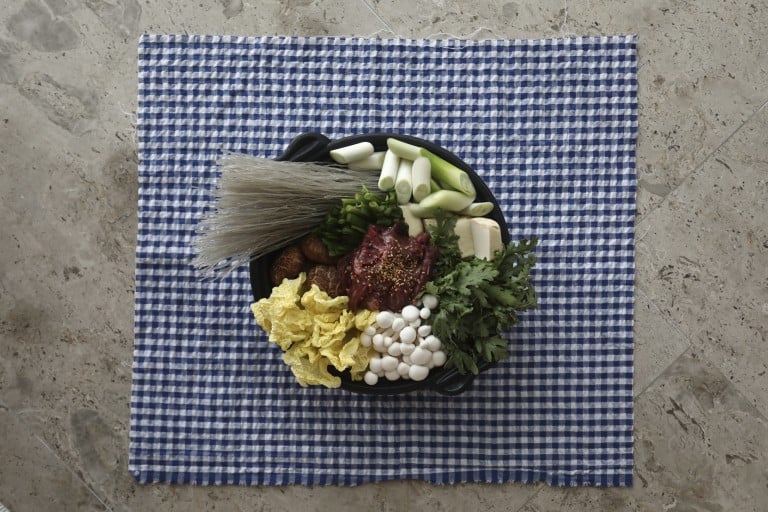 Attractively arrange the leeks, shimeji mushrooms, chives, spring onions, chrysanthemum leaves, bean curd, shiitake mushrooms and sweet potato noodles in the pot, leaving room at the centre. (It’s OK if the ingredients hang over the sides slightly.) Remove the beef from the marinade and place into the centre of the ingredients in the pot. 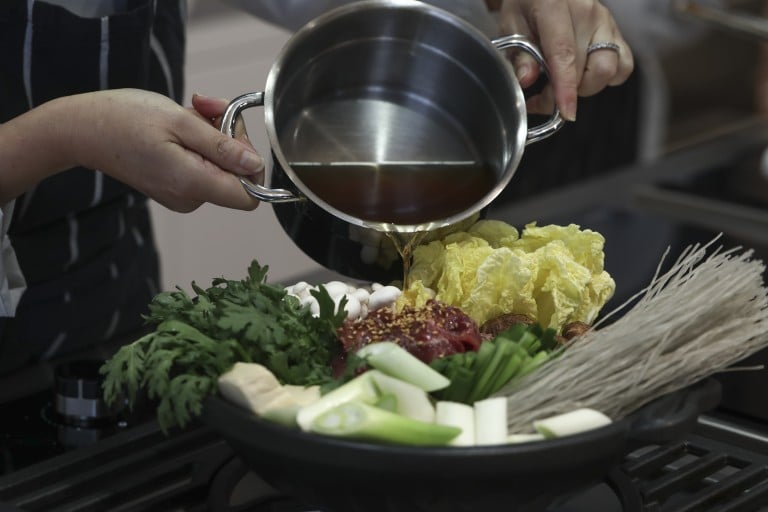 Pour about 600ml (2 ½ cup) of broth into the pot and bring to a simmer over a medium-high flame. The ingredients will soften as they heat, and can be pushed down into the pot so they are submerged. Add more broth to almost fill the pot, then cover the pot with a lid and simmer over a medium flame for about 10 minutes, or until the ingredients are fully cooked. Add more broth if it seems dry.

Serve with the rice, kimchi and banchan. Let your guests make a dipping sauce for the beef by mixing the gochujang with soy sauce, sesame oil, sesame seeds and minced spring onions.

After eating most of the ingredients, add the radish that was cooked with the broth, and the mandu and/or noodles, stirring in more broth as necessary. If you run out of broth, use plain water.

11/11
Korean Dinner Easy
Liking this recipe?
Now you can save the recipe you into your own collection.
Find us on facebook
Join our community and get the latest recipes from all over Asia for you to make at home.