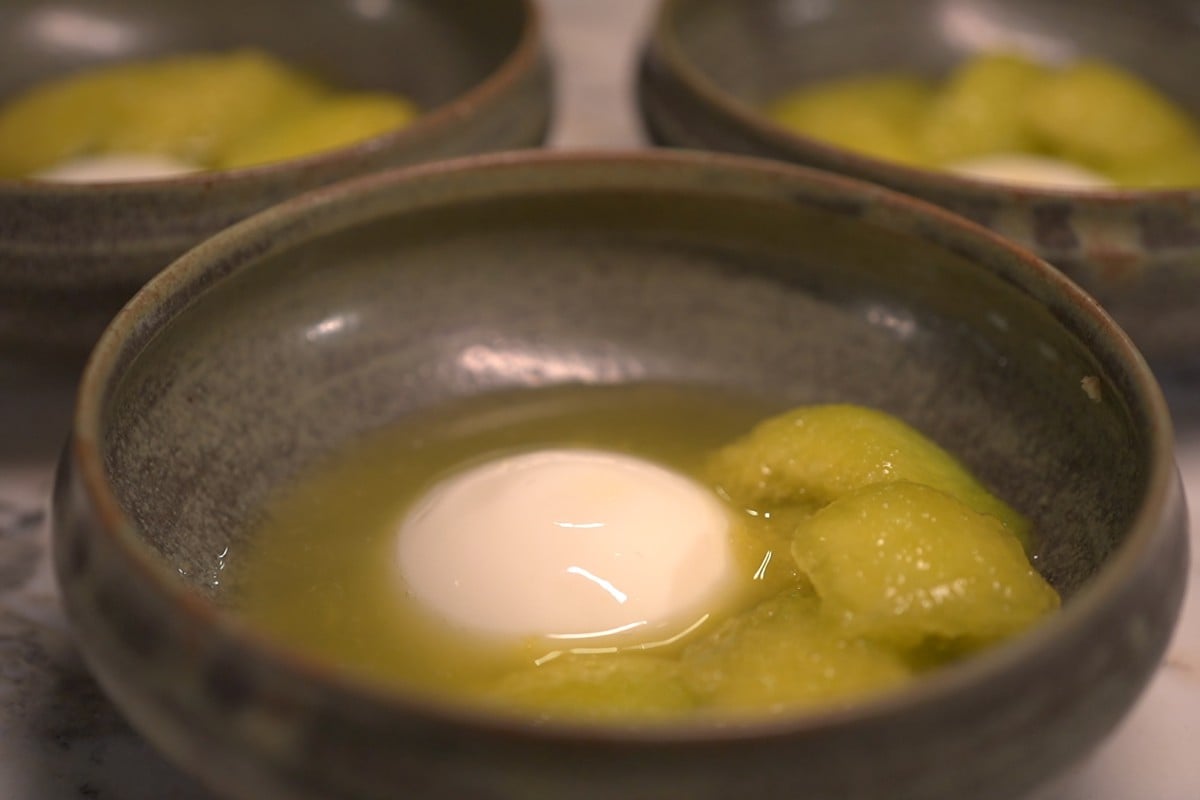 At his two-Michelin-star restaurant Ta Vie in Hong Kong, chef Hideaki Sato serves a tasting menu of Japanese-French food. The Nagano native worked at the three-Michelin-star Nihonryori Ryugin in Tokyo, then in 2012 opened its Hong Kong branch, Tenku Ryugin, which quickly gained two stars. He opened Ta Vie in 2015.

Although trained in Japanese and French cuisines, Sato is endlessly curious about the dishes of other cultures. He’s been documenting his attempts at Peking duck and ma lai goh (a Chinese steamed cake) on his Instagram account. When he perfects these, he says, his next cooking experiments will focus on har gau, or steamed shrimp dumplings.

In this easy-to-make dessert, Sato takes the classic French blancmange - a light, delicate milk pudding set with gelatine - and gives it an Asian touch by infusing jasmine tea leaves into the liquid. He then serves the pudding with sweet, refreshing Japanese crown melon, and recommends the type from Shizuoka. Sato says this dessert reflects his culinary philosophy of “pure, simple and seasonal”.

The blancmange needs a few hours to set, so it can be turned out of the moulds. Sato uses individual moulds that hold at least 40ml. You will need eight or nine moulds.

Pour the milk and water in a saucepan and place over a medium flame. When the liquid comes to a boil, turn off the flame. Add the dried jasmine blossoms to the pan, cover with the lid and remove from the heat. Leave to infuse for three minutes.

Pour the milk/water through a sieve into a bowl, then discard the jasmine blossoms. Weigh the liquid - there should be 275ml (1 cup and 5tsp); if not, add water to make up the amount (if there’s too much liquid, remove the excess so it weighs 275ml).

Add the gelatine and sugar to the hot liquid and stir to dissolve. Place the bowl in the ice water bath and leave until cool, stirring often (don’t let it get too cold, or the gelatine will set).

In a small bowl, whisk together the cream and yoghurt, then add this to the milk/gelatine mixture. Stir the ingredients constantly for about two minutes in the ice water bath, or until the mixture starts to thicken.

Place the moulds on a tray. Pour the mixture into the moulds, using 40ml (1½oz) for each. Refrigerate for about three hours, or until set.

Slice the melon in half, taking care not to loose any of the liquid. Scoop out the seeds and melon juice from the centre of the cavity into a sieve placed over a bowl. Press on the solids in the sieve, trying to get as much juice as possible. Discard the seeds.

Use a spoon to scoop the melon flesh from the shell, placing the pieces in the bowl with the melon juice. Place the bowl in an ice water bath, to chill down the melon.

When ready to serve, prepare a bowl of hot water. Very briefly dip one of the moulds into the hot water, then invert it and shake it gently - the blancmanage should slide out. Place the blancmange in an individual serving dish and repeat with the remaining moulds. Spoon some of the melon and melon juice over and around the blancmange, then serve.

9/9
Fusion Dessert Low-Fat Low-Sodium Gluten-Free Peanut-Free Easy
Diet definitions
Liking this recipe?
Now you can save the recipe you into your own collection.
Find us on facebook
Join our community and get the latest recipes from all over Asia for you to make at home.