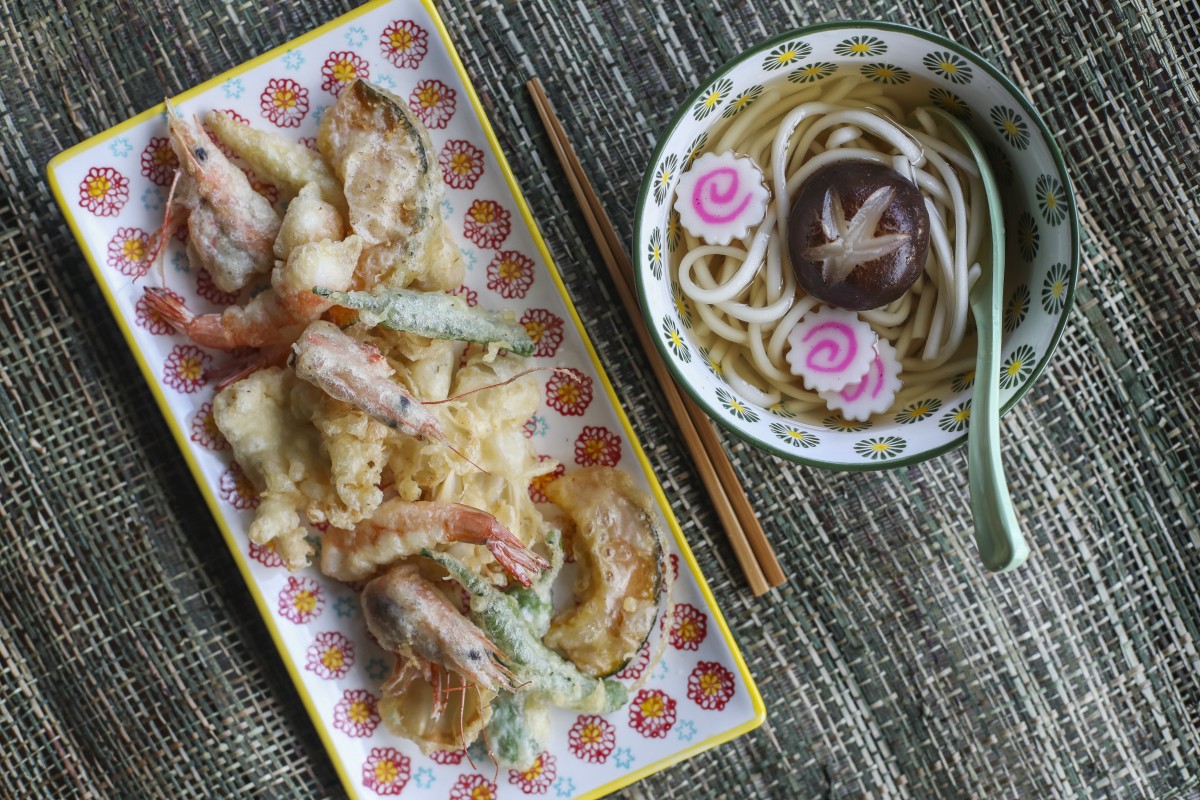 At tempura restaurants, the chef fries the ingredients at a steady pace and places each piece in front of you as soon as it’s done so that it is hot and crisp. At home, though, that process doesn’t work well, at least, not if the cook wants to eat with the diners. So I have a non-traditional way of making tempura – I double-fry. The first frying cooks the ingredients and can be done in advance. Then, just before you want to serve the meal, fry the ingredients a second time, to heat them through and make the coating crisp. It’s not something I’d want to serve to a Japanese chef, but it works well for me.

When you make tempura udon, it is important to serve the two elements separately; I've had it at restaurants where the tempura is floating in the bowl of hot broth and noodles, which makes it soggy. The pleasure of a good bowl of tempura udon is giving the tempura just a brief dip into the soup, so it slightly softens the crust without saturating it.

Feel free to change the ingredients as you like: use fish fillets instead of shrimp (or make a vegetarian version with sliced firm bean curd). If you can't find kabocha squash then use sliced sweet potatoes instead; if you don't have maitake mushrooms (also known as hen of the woods) use enoki (leave them in small clumps attached at the base), while long slices of bell pepper are good if you don't have shishito peppers.

Dashi bags look like tea bags and contain ingredients such as kelp and dried bonito shavings, anchovies and kelp, and even powdered crab; there are vegetarian versions, too. Use whatever type you like.

Peel the shrimp, leaving on the tail, and remove the heads. The heads will be fried along with the shrimp meat, but the shells can be reserved and frozen; when you have enough (from other dishes) use them to make shrimp broth. Cut a slit down the back of the shrimp and remove the veins. Lay the shrimp on their backs. Use a sharp knife to cut a series of shallow (about 3mm/⅛in deep) parallel slits along the inner part of the shrimp, and perpendicular to the length – this prevents the shrimp from curling. Lay the shrimp and heads on paper towels on a tray and refrigerate while preparing the other ingredients.

Rinse the rind of the kabocha, then scoop out and discard the seeds and fibres from the cavity. Slice the kabocha about 5mm (¼in) thick (no need to peel it). Cut the maitake mushrooms into smaller clumps. If the baby corn cobs are unhusked, remove and discard the husks and corn silk, then rinse the ears and pat them dry. 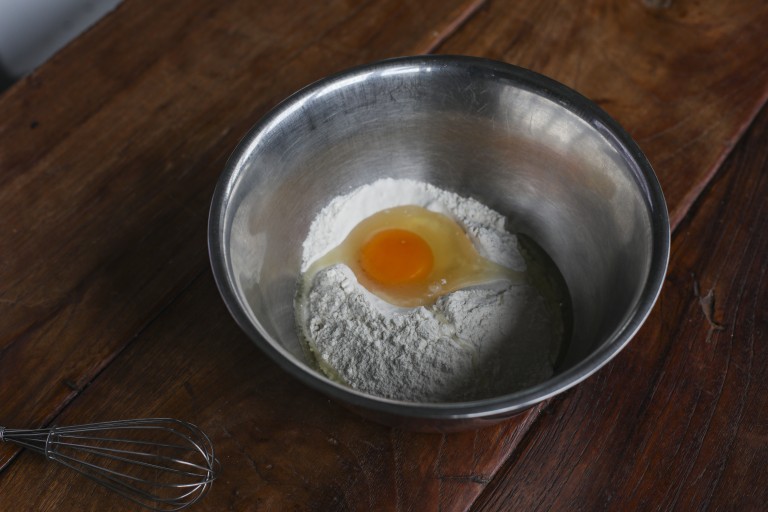 While the oil is heating, put the flour in a bowl, add the egg, then immediately pour in the chilled soda water. Use chopsticks or a whisk to stir the ingredients to form a thin, slightly lumpy batter. 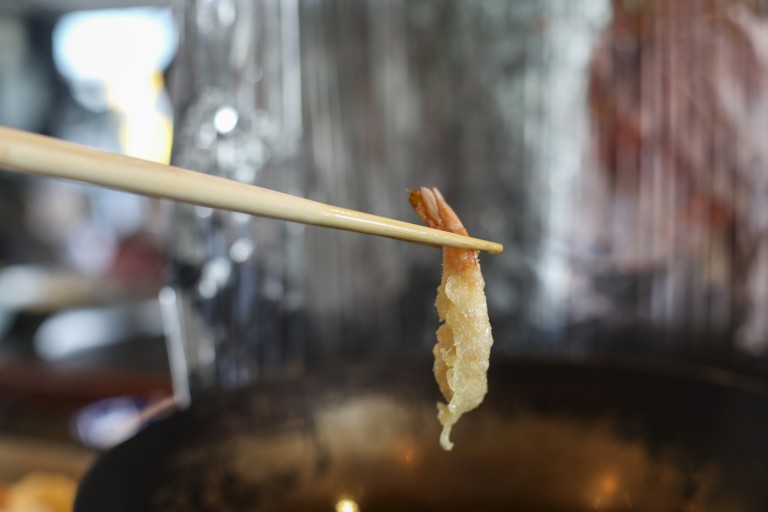 When the oil is hot, start frying the ingredients. Holding the shrimp by the tails, dip them into the batter before placing them in the oil. Fry until cooked through (about a minute), then drain on paper towels. Coat the heads in the batter and fry them, then cook the other ingredients the same way. The squash will take a little longer to cook than the softer ingredients. After frying all the ingredients, turn off the flame but leave the oil in the wok.

Pour two litres (2 quarts) of water into a pan and bring to a boil. Add the dashi bags, then turn off the heat, cover the pan with the lid and leave to steep for five minutes. Remove the bags from the pan.

Rinse the shiitake mushrooms and cut the top decoratively, if you like. Cut eight slices of the fish cake, cutting it about 5mm (¼in) thick (wrap the remaining fish cake and refrigerate; use it within a week). Mince the spring onions. 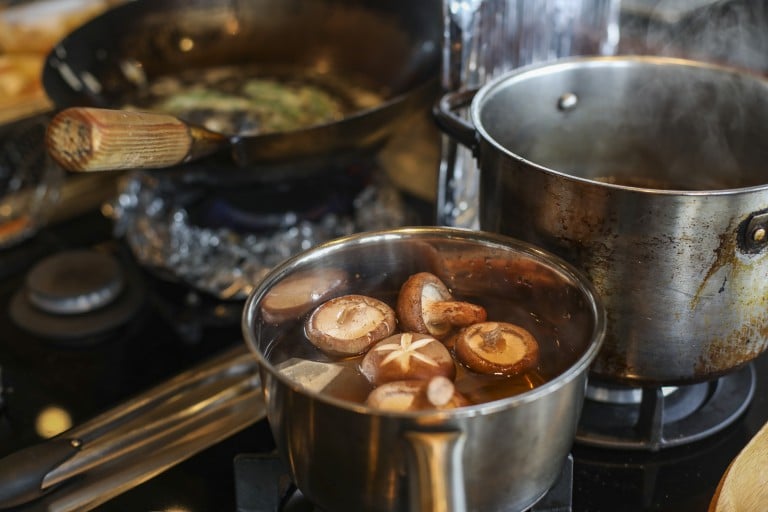 Bring the dashi to a boil over a high flame, then lower the heat. Add the shiitake mushrooms and simmer for five minutes, then turn the flame to very low and cover the pan with the lid so it stays hot while you are re-frying the tempura.

Start boiling another pot of water, so it's ready to cook the udon as soon as the tempura is fried.

Heat the oil in the wok to 180°C (350°F). Add the fried ingredients and fry them a second time. Adjust the heat to keep the oil close to the right temperature. Fry the ingredients briefly – for less than a minute – then drain on paper towels.

Add the udon noodles to the boiling water and cook until tender - about a minute. Drain the noodles, then divide them between four bowls. Lay two slices of fish cake and one shiitake mushroom over each portion of noodles, then ladle the dashi broth into the bowls. Sprinkle with the minced spring onion.

Arrange the tempura on a platter. Let each guest help themselves to the tempura, and add some shichimi togarashi to their bowls, if they like.

12/12
Susan Jung Japanese Dinner Noodles Shellfish Vegetables Medium
Liking this recipe?
Now you can save the recipe you into your own collection.
Find us on facebook
Join our community and get the latest recipes from all over Asia for you to make at home.