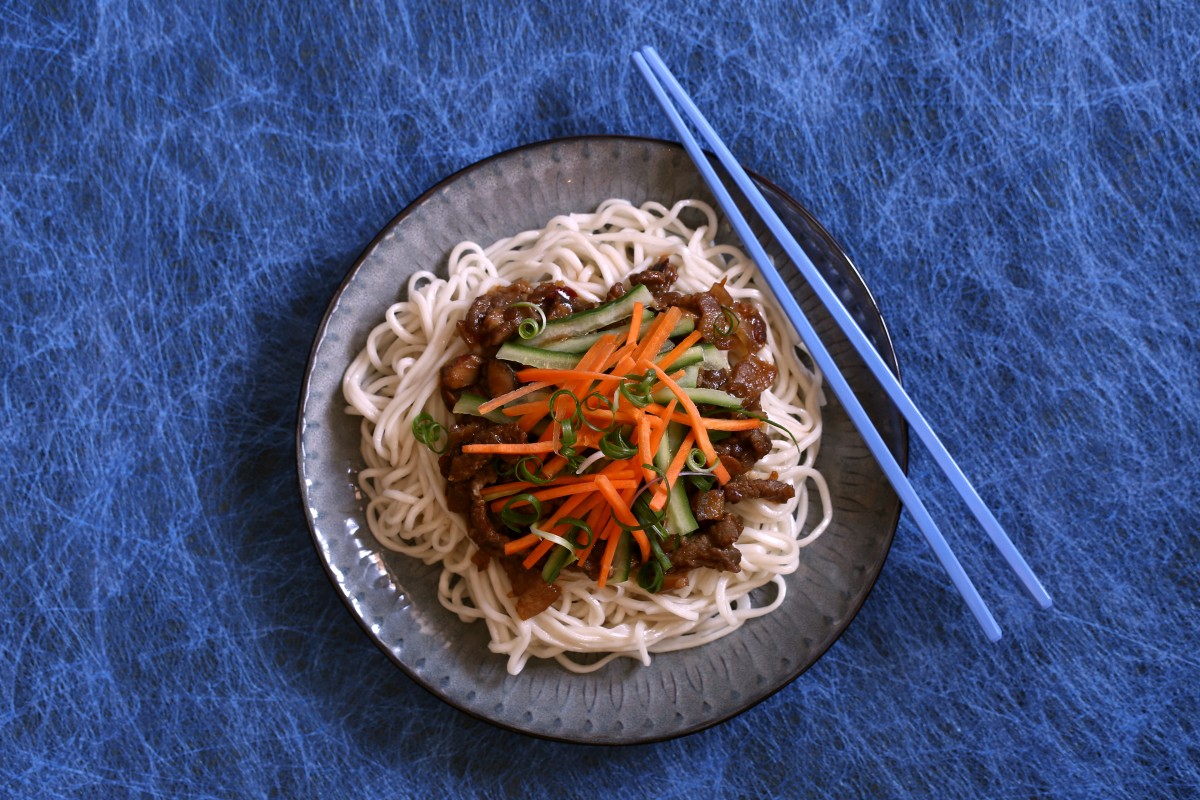 Zhajiangmian is a Chinese dish that every cook makes differently. It can be made with minced pork or small cubes of pork belly. I’ve eaten versions with cooked cucumber (most use the raw stuff), with mushrooms and without, and topped with blanched bean sprouts and other vegetables, in addition to the usual carrot.

If you want to save a little time, buy thick-sliced, frozen, skin-on pork belly from shops that sell meats for Korean barbecue, then cut it into strips while it’s just partially thawed. For a vegan version of the dish, substitute about 300g (10½ oz) of firm bean curd – cut into small cubes – for the pork and double the amount of Korean squash.

The sauce is intense and salty, and should be used sparingly – just enough to coat the noodles. The amount of sauce in the recipe will serve eight to 10. The raw vegetables help to balance the strong flavour of the sauce. It might not be traditional, but I also like to add a splash of Chinese vinegar to the sauce, just before mixing it with the noodles and vegetables.

There are several types of Chinese bean paste, which varies depending on what region it is produced in. Check the ingredients label: it shouldn’t contain much more than broad beans or soybeans, with wheat or wheat flour, salt, sugar and, sometimes, flavour enhancer and oil. Zhajiangmian made with Japanese miso in place of the bean paste is a delicious, elegant variation.

The Korean adaptation of the dish is called jajangmyeon, which gets its darker colour – almost black – from the use of black bean paste, instead of the Chinese soybean or broad bean paste. Jajangmyeon also has a lot more vegetables in the sauce – often Korean squash (which I add to this version), cabbage, diced potatoes and daikon.

If using dried mushrooms, rinse them briefly, then put them in a bowl and add about 200ml (¾ cup and 1tbsp) of warm water. Leave the mushrooms to soak until fully hydrated (about two hours), then squeeze out the excess water (reserve the soaking liquid for later). Remove and discard the mushroom stems, then cut the caps into 5mm (¼in) pieces. If using fresh mushrooms, rinse them briefly, then cut them into 5mm (¼in) pieces.

Slice the pork belly about 5mm (¼in) thick (it is easiest to do skin-side down), then cut the slices into 5mm strips. Put the pieces in a bowl and add the soy sauce, rice wine, sesame oil, sugar, salt, pepper and cornstarch. Mix well, then leave to marinate while preparing the other ingredients.

Chop the onion, thinly slice the garlic and cut the Korean zucchini into medium dice.

Heat the cooking oil (or lard) in a wok placed over a medium-high flame, add the onion and garlic and stir-fry for about 30 seconds. Add the pork and stir-fry until it starts to lose its pink colour, then mix in the mushrooms, zucchini and bean pastes. If you used dried mushrooms, strain the soaking liquid through a fine sieve and measure out 150ml (⅔ cup); with fresh mush­rooms, use 150ml of plain water. Pour the liquid into the wok and stir well, then bring to a boil. Lower the heat and simmer, stirring often, until the pork is tender and the liquid reduces to a consistency that will lightly coat the noodles, about 20 minutes.

While the sauce is cooking, prepare the noodles and other ingredients. Peel the carrot, then cut it and the cucumbers into thin batons about 4cm (1½in) long. Mince the spring onions. Bring a large pot of water to the boil, add the noodles and cook until done, then drain.

Divide the noodles between bowls, then ladle the sauce over the top. Arrange the carrot, cucumber and spring onion over each portion, and if you like, add a splash of Chinese vinegar. Mix the ingredients thoroughly before eating.

6/6
Chinese Lunch Noodles Pork High-Fiber Dairy-Free Peanut-Free Easy
Diet definitions
Liking this recipe?
Now you can save the recipe you into your own collection.
Find us on facebook
Join our community and get the latest recipes from all over Asia for you to make at home.