Profiteroles – ice cream or cream filled puffs – are a classic French dessert that almost everyone likes. Usually, the ice cream is vanilla and the profiteroles are served with a rich, warm chocolate sauce for a lovely hot-cold temperature contrast.

In this recipe, the dessert gets a Southeast Asian treatment, with ice cream made of coconut milk and fragrant pandan leaf, and rich, deeply flavoured caramel made with gula melaka.

Gula melaka is the Malaysian version of the Southeast Asian sugar made from palm sap, usually from coconut palms. The clear sap is simmered until it’s thick and deep brown before being poured into moulds to solidify. When I make caramel with granulated sugar, I go by colour – the white sugar cooks to a dark amber. Gula melaka is dark amber to start with, so you can’t go by colour but need to use a thermometer to check it’s simmered long enough. If you can't find gula melaka, use dark brown or muscovado sugar instead.

Recipes for choux paste – the versatile dough used for cream puffs and eclairs – call for varying amounts of egg. It’s hard to give the exact amount, because it depends on the moisture content of the paste: if you cook it a little longer on the stovetop and stir it to let the steam escape, it will absorb more egg, and it puffs up better – but if you use too much egg, the paste won’t puff up at all.

Here, you have extra egg whites from making the ice cream, some of which you can add to the paste instead of whisking an egg and using just part of it.

Make the ice cream first, so it has time to harden in the freezer. If using fresh pandan, finely chop the leaves, then put them in a mortar and pound hard enough to bruise them and make the moisture rise to the surface. 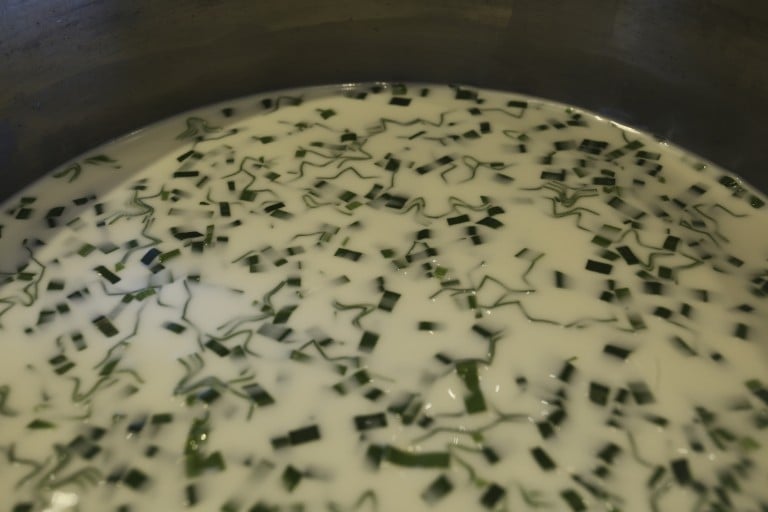 Put the coconut milk in a saucepan and add the pandan leaves. Bring to a simmer, then turn off the heat and infuse for 10 minutes. Repeat this process once. Pour through a fine sieve placed over a bowl and press on the pandan solids in the sieve to extract as much flavour as possible. Discard the solids, then pour the infused coconut milk back into the saucepan. If using pandan extract, skip the infusion step and simply heat the coconut milk to simmering, before proceeding with the rest of the recipe. 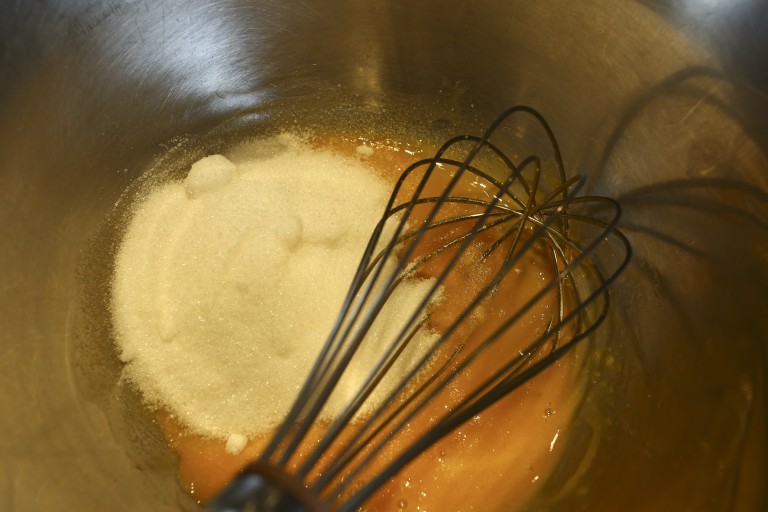 Place the egg yolks in a bowl, add the sugar and salt and whisk immediately until thick and smooth. 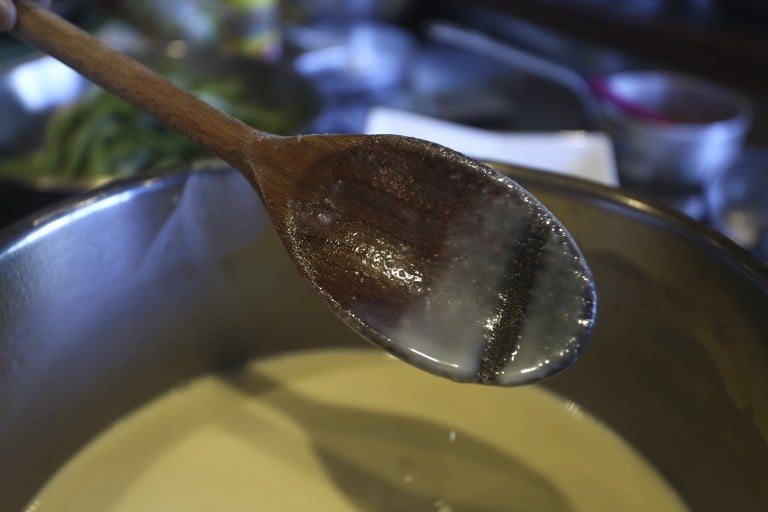 Place the pan over a low flame and stir constantly with a wooden spoon. The mixture will thicken slightly: when it lightly coats the back of the spoon and leaves a track mark as you draw your finger through it, remove it from the flame.

Cool the mixture to room temperature, whisking often, then refrigerate until cold. If using pandan extract, whisk it in now, along with the rum (or egg white), then process in an ice cream machine. Pack the mixture into a container and freeze for at least three hours.

Make the cream puffs. Preheat the oven to 220°C (430°F). Put the butter in a saucepan with the salt and 120ml (½ cup) of water and place over a medium flame. Bring to a full boil, then turn off the heat and add the flour all at once. Stir immediately with a wooden spoon, making sure all the flour is moistened and there are no dry spots.

Turn the flame to low and stir constantly until the mixture comes away from the sides of the pan. Continue to stir for about 30 seconds, then turn off the heat. Leave to cool for about 15 minutes, stirring occasionally. 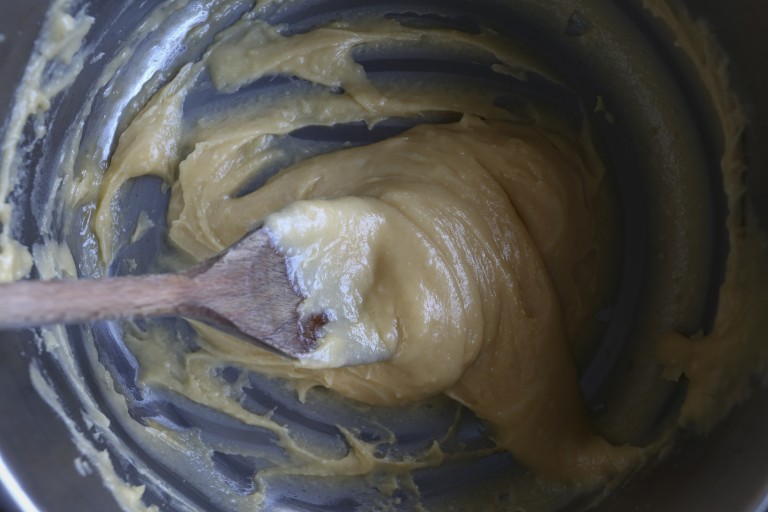 Crack one of the eggs into the paste and mix until it is fully incorporated. Mix in the second egg, then check the consistency. It’s correct when the mixture is smooth and glossy, and forms a soft peak when you touch it with your fingertip. If necessary, stir in some egg white, adding tiny amounts at a time until it is the right consistency. 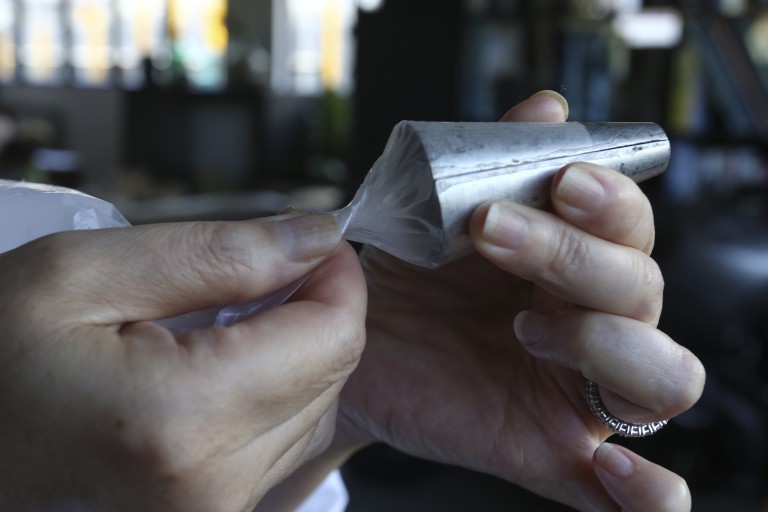 Line a baking sheet with parchment paper. Fit a piping bag with an 8mm plain tip. 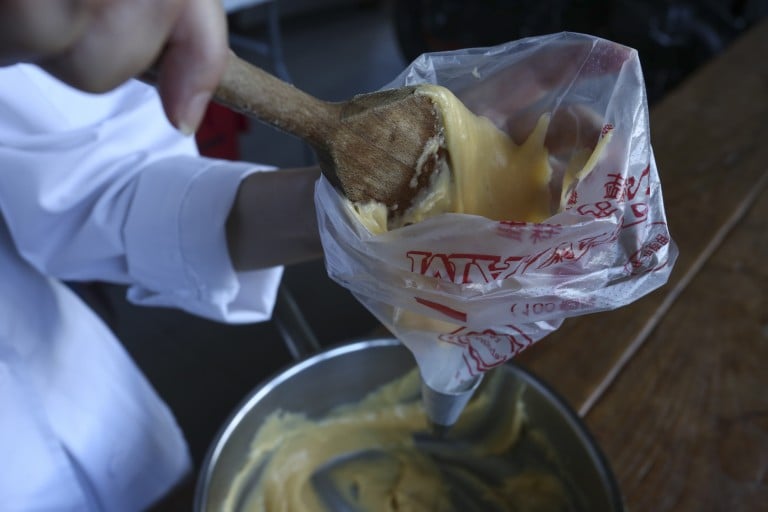 Fill the piping bag with the choux paste. Pipe a small amount of the choux paste onto each corner of the baking tray, then press the parchment paper down on top, to “glue” it down. Pipe the mixture into 3cm (1¼ in) mounds, leaving about 1cm (7/16 in) between each. You should have 28 to 32.

Moisten your fingertip and lightly smooth out the top of each choux paste mound. Place the tray in the oven and reduce the heat to 200°C (390°F). Bake for 15 minutes, then turn the heat down to 180°C (350°F). Continue to bake until the puffs are medium golden, light and firm, with no soft spots. When you lift one from the parchment, it should come away easily. Cool to room temperature. Make the caramel. Roughly chop the gula melaka, put it in a saucepan and add the corn syrup, salt and about 60ml (¼ cup) of water. Bring to the boil and cook until smooth, stirring often. Stop stirring and cook the mixture until it reaches 120°C (250°F). Start watching the temperature carefully – at this point, it rises quickly. 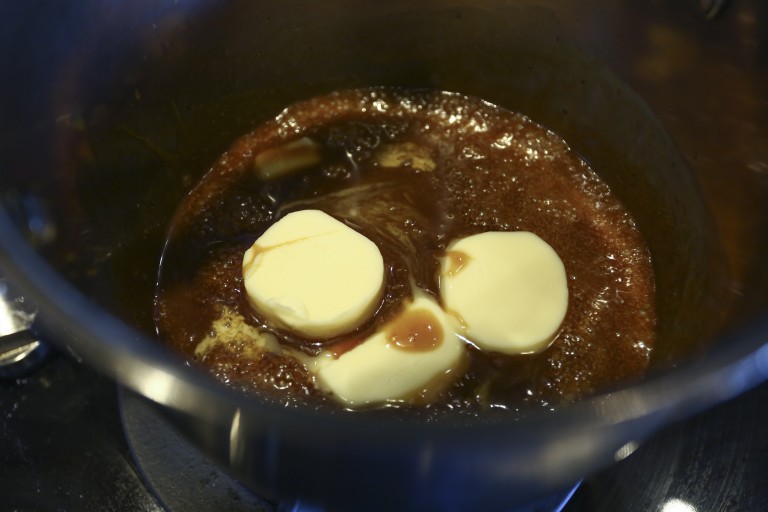 Continue to cook the caramel until it reaches 130°C (270°F), then remove from the flame and carefully stir in the cream – it will bubble and release hot steam. Add the butter and stir constantly until fully incorporated. Cool slightly before using. If it’s too thick to pour, stir in a little more cream.

To assemble the dessert, slice off the top third of the baked puffs. Using a small ice cream scoop, put the ice cream into the bottom part of the puffs. Place the tops back on over the ice cream.

Place pyramids of four filled puffs on each dessert plate – three as the base and one on top. Pour some of the warm caramel over each portion, then garnish with toasted coconut and mint leaves. Serve immediately. Serves seven to eight. The leftover ice cream will keep in the freezer for at least two weeks.

16/16
Susan Jung Fusion Dessert Eggs Eggs Hard
Liking this recipe?
Now you can save the recipe you into your own collection.
Find us on facebook
Join our community and get the latest recipes from all over Asia for you to make at home.