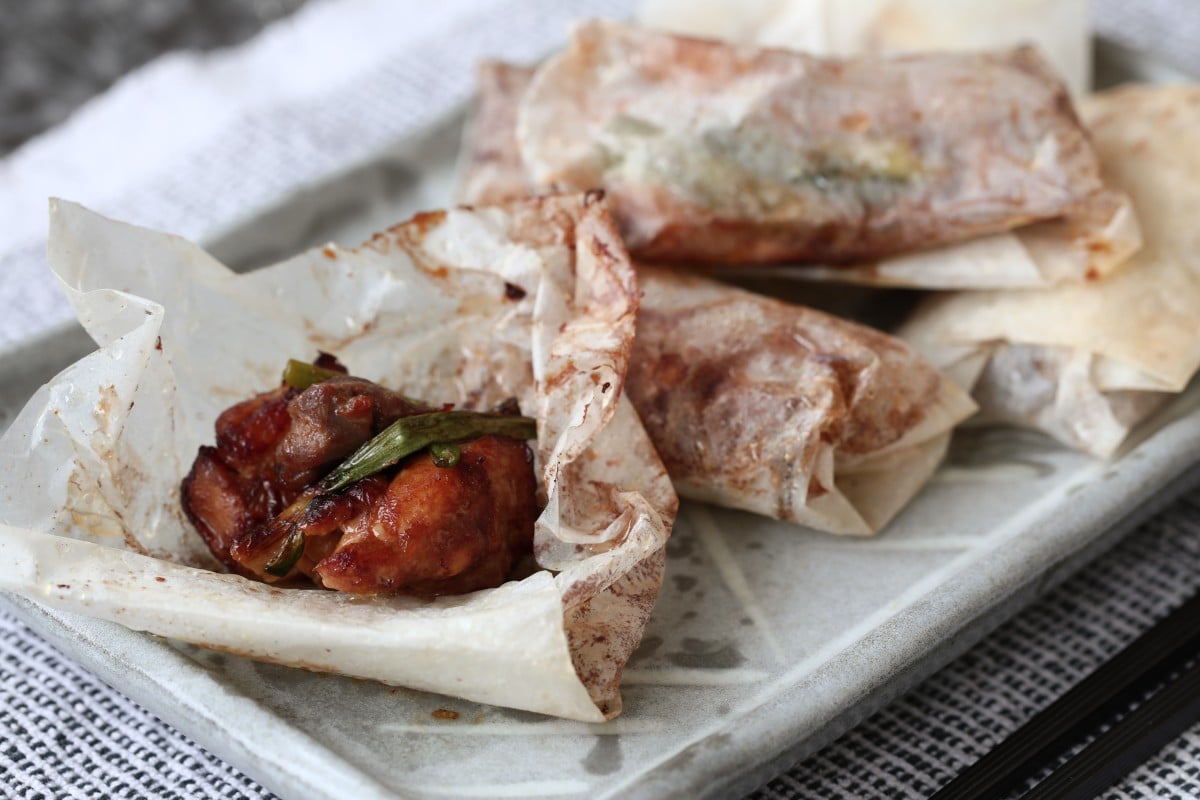 There are many recipes for paper-wrapped chicken, and at least two ways to actually wrap it. Parchment paper looks prettier because, when the parcels are fried, you can see the ingredients inside; when I use parchment, I make sure to put the spring onion underneath the chicken before wrapping it, so the green and white stands out against the brown meat. However, because the paper is a little stiff, it can be difficult to seal, increasing the likelihood of the marinade leaking out while the parcels are frying. Aluminium foil is not as attrac­tive and you can’t see the ingredients, but the seal is tighter so there is less risk of it leaking. Use whichever one you like.

I like dark meat (the thighs and legs) more than the breast but for this dish I use a fresh local chicken, instead of buying chicken parts. You should be able to get at least 600 grams of chicken meat (including the unboned drumette and middle portion of the wing) from a whole bird that’s 1.2kg. The bones and fat of the bird shouldn’t be wasted; the former is for making chicken stock, the latter should be saved in the freezer and, when you have enough, cook it long and slow over a low flame – the rendered fat is a fantastic, flavourful medium for roast potatoes or vegetables. If you want to save time, though, buy boneless chicken meat. 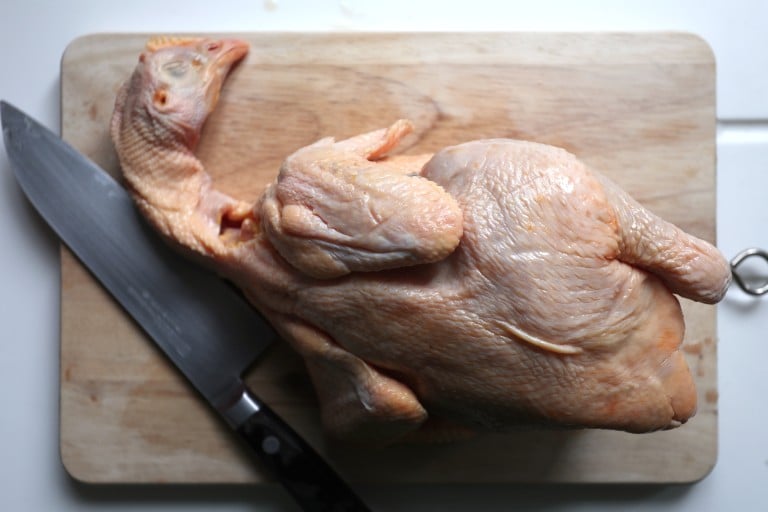 If using a fresh chicken, cut the wings from the carcass. Chop off the wingtip (save it with the other bones for chicken stock), then separate the drumette and middle portion, cutting between the joint, and put the pieces in a medium-sized bowl. Remove all the meat and skin from the drumsticks, thighs, breasts and carcass, making sure to dig out the “oysters” from the lower part of the back.

Whether using a whole chicken or chicken parts, cut the meat and skin into 2cm (⅞in) pieces and put them into the bowl with the chicken wing joints. Add the oyster sauce, soy sauce, rice wine, sesame oil, sugar, salt, white pepper and cornstarch to the bowl and mix thoroughly. Finely julienne the ginger slices and cut the spring onions into 3cm (1¼in) lengths, then add these ingredients to the bowl and mix well. Cover the bowl and refrigerate for two hours, stirring occasionally. 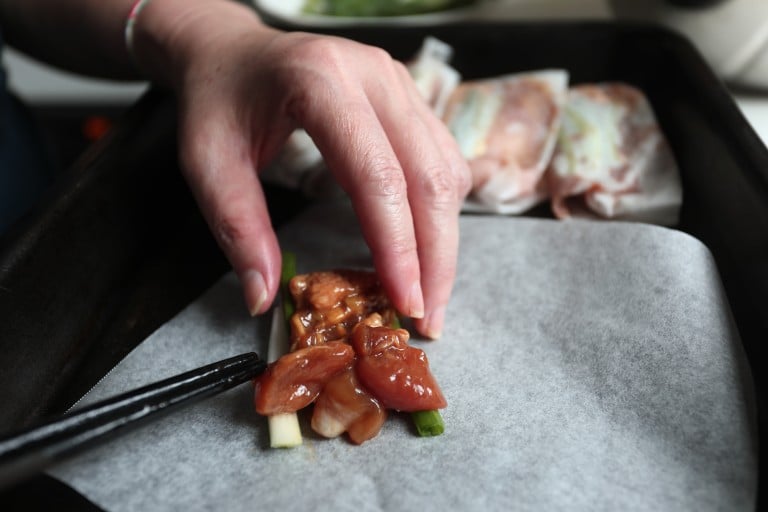 Make 20-24 15cm (6in) squares of parchment paper or aluminium foil. Place one square on the work surface, with one of the corners pointing towards you. Place two or three pieces of meat (or one piece, if it’s a wing joint), plus some spring onion and ginger, on the square, slightly off centre so it’s near the corner facing you. (If using parchment, place the spring onion pieces under the chicken, so you’ll see the green and white when the parcels are fried.)

Fold the near corner up and over the chicken, then fold over once more towards the far corner. Fold in the sides so the overlap is in the middle and securely enclose the filling. Bring the top corner down and tuck it tightly into the opening created by the sides. Press firmly so the filling is securely wrapped. Don’t overfill the parcels or it will be difficult to make a tight “envelope” with the parchment or foil. Continue with the rest of the paper and the filling.

Pour cooking oil to the depth of about 4cm (1½in) in a wide pan and heat to 170°C (340°F). Fry the chicken parcels several at a time for about three minutes, turning them over once. When taking the parcels out of the oil with tongs, carefully tip them so the oil runs out back into the pan. Drain the parcels on paper towels.

Serve, and let each diner unwrap the parcels at the table.

6/6
Susan Jung Chinese Dinner Poultry Dairy-Free Keto Peanut-Free Medium
Diet definitions
Liking this recipe?
Now you can save the recipe you into your own collection.
Find us on facebook
Join our community and get the latest recipes from all over Asia for you to make at home.