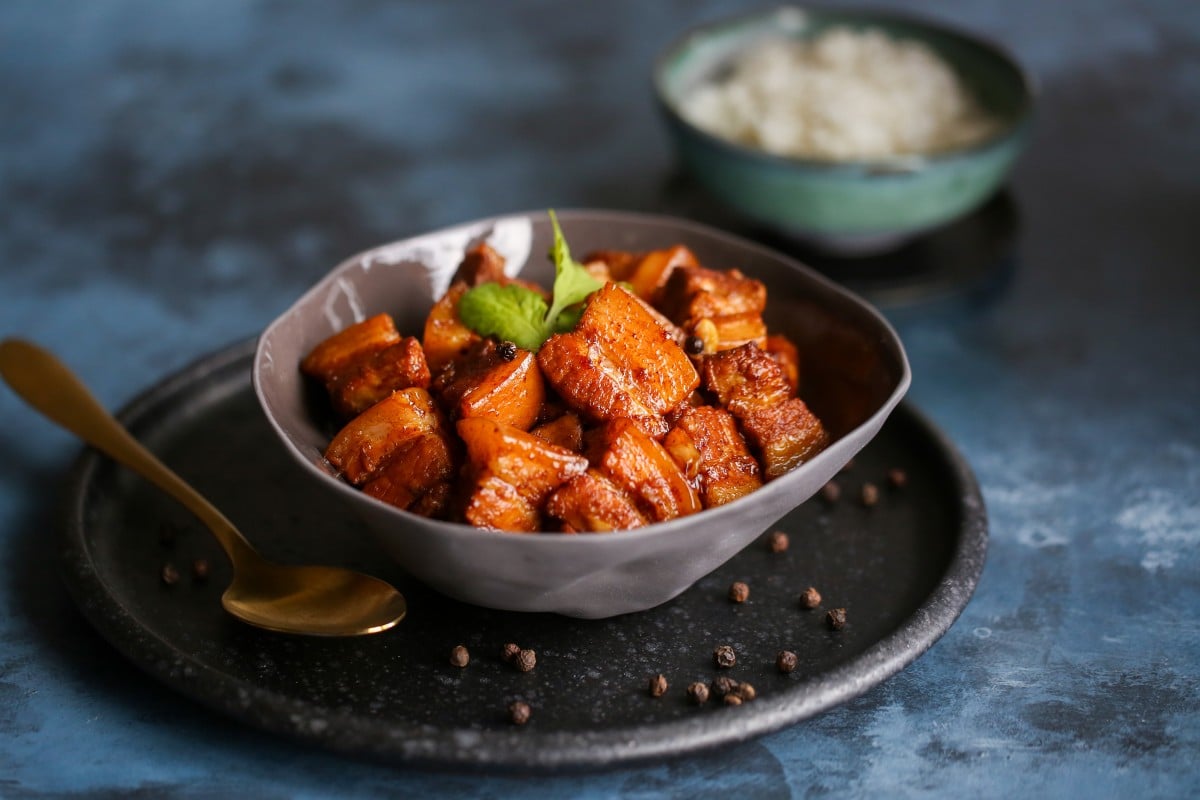 Adobo is one of those dishes for which there are almost as many recipes as there are cooks. The only thing they all have in common is vinegar, garlic and pepper; the dish can also include soy sauce, sugar or coconut milk, plus different types of meat. I learned the basic technique from the cooks at the first restaurant in Hong Kong that I worked at as a pastry chef. The cooks took turns at making the staff meal, and since most of them were from the Philippines, adobo featured frequently.

This recipe employs an interesting technique - a reverse sear. Instead of browning the meat at the start, it is done towards the end, when already tender. While it is browning, reduce the sauce, then put the meat back into the pan and simmer the ingredients briefly. As with many stewed dishes, this one tastes better the next day.

Don’t be alarmed by the amount of vinegar – the acidity is balanced by sugar. The amount of sugar is variable, but don’t use so much that the dish becomes sweet – the flavour should be a little sharp. If possible, use coconut, palm or rice vinegar, instead of inexpensive white vinegar, which is just acidic, without any subtlety. Don’t be alarmed by the amount of garlic either. This is a boldly flavoured dish and should be served with plenty of white rice. 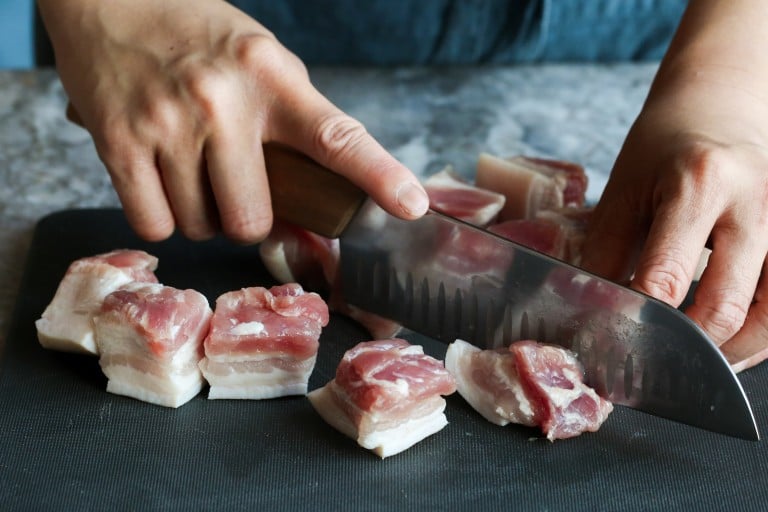 Cut the pork belly into largish chunks about 2½cm (1in) square. If the meat is skin-on, it cuts more easily if you put it skin side-down on the cutting board. 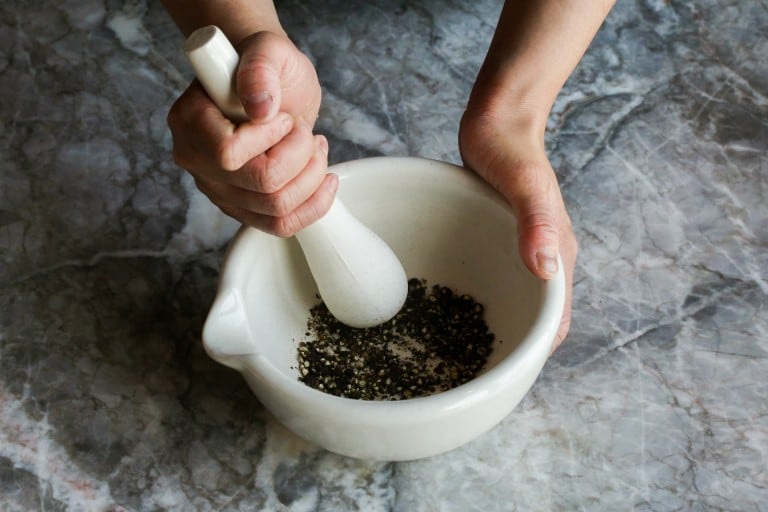 Roughly chop the garlic cloves. Roughly crush the peppercorns in a mortar. 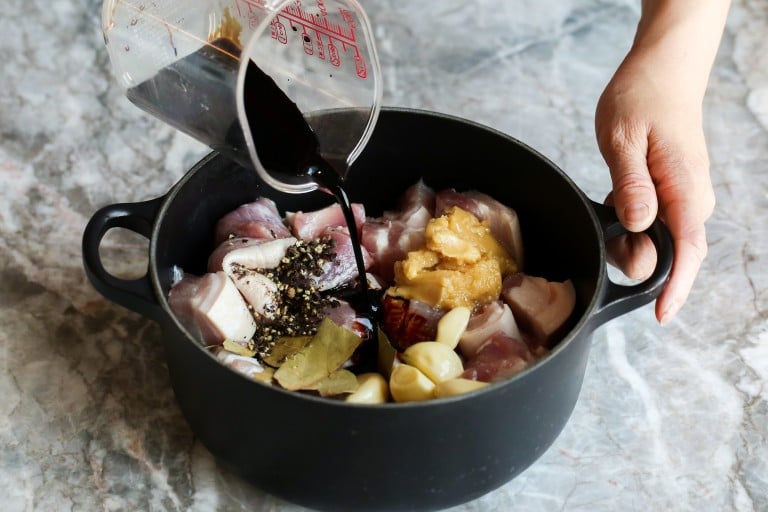 Put the pieces of pork belly in a heavy pan, add the garlic, peppercorns, vinegar, soy sauce, sugar and bay leaves and mix well. If you have time, marinate the ingredients for an hour or two, stirring occasionally; if not, cook the adobo immediately. When ready to cook, pour 500ml (2 cups) of water into the pan with the ingredients. Bring to the boil over a medium flame then reduce the heat, cover the pan with the lid and simmer, stirring often. Cook for about 45 minutes, or until the meat is tender. Turn off the flame. 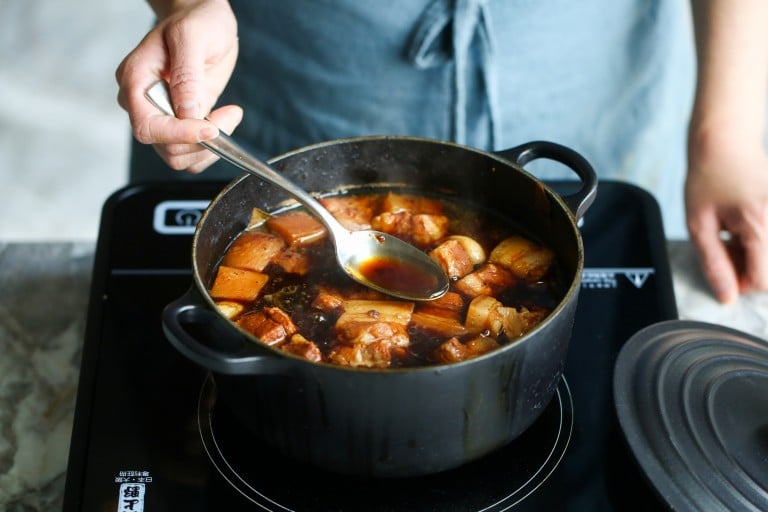 Use a shallow ladle or spoon to skim off as much fat as possible from the surface of the cooking liquid, putting the fat into a bowl. Pour about 20ml (4tsp) of the fat into a skillet placed over a high flame. Use tongs to remove all the meat from the cooking liquid and place it in the skillet, to brown the pieces (it will splatter). While the meat is browning, turn the flame under the pan to high and boil the sauce to reduce it. Taste the sauce and add more sugar, if necessary. When the meat is browned, turn off the flame and continue to reduce the sauce (it needs a little more time). When it is ready, the sauce will still be quite liquid, but will have some body. 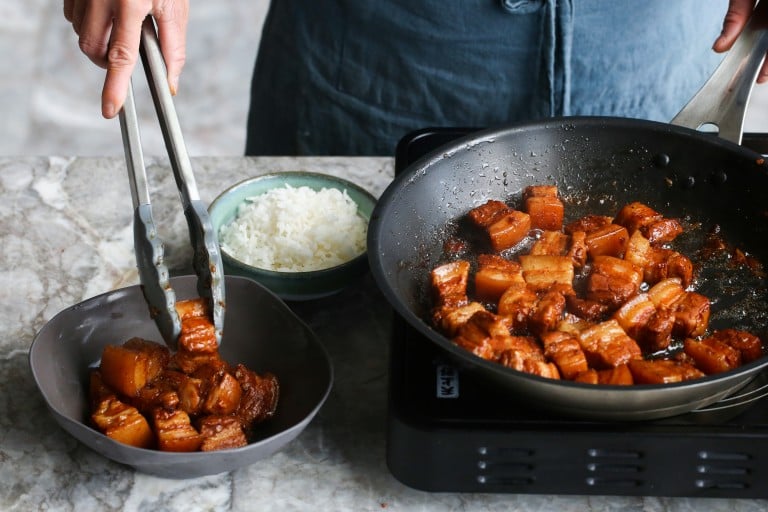 Put the meat back into the pan and simmer for about five minutes, then serve the adobo with white rice and green vegetables.

5/5
Susan Jung Filipino Main Course Pork Low-Carb Dairy-Free Peanut-Free Easy
Diet definitions
Liking this recipe?
Now you can save the recipe you into your own collection.
Find us on facebook
Join our community and get the latest recipes from all over Asia for you to make at home.