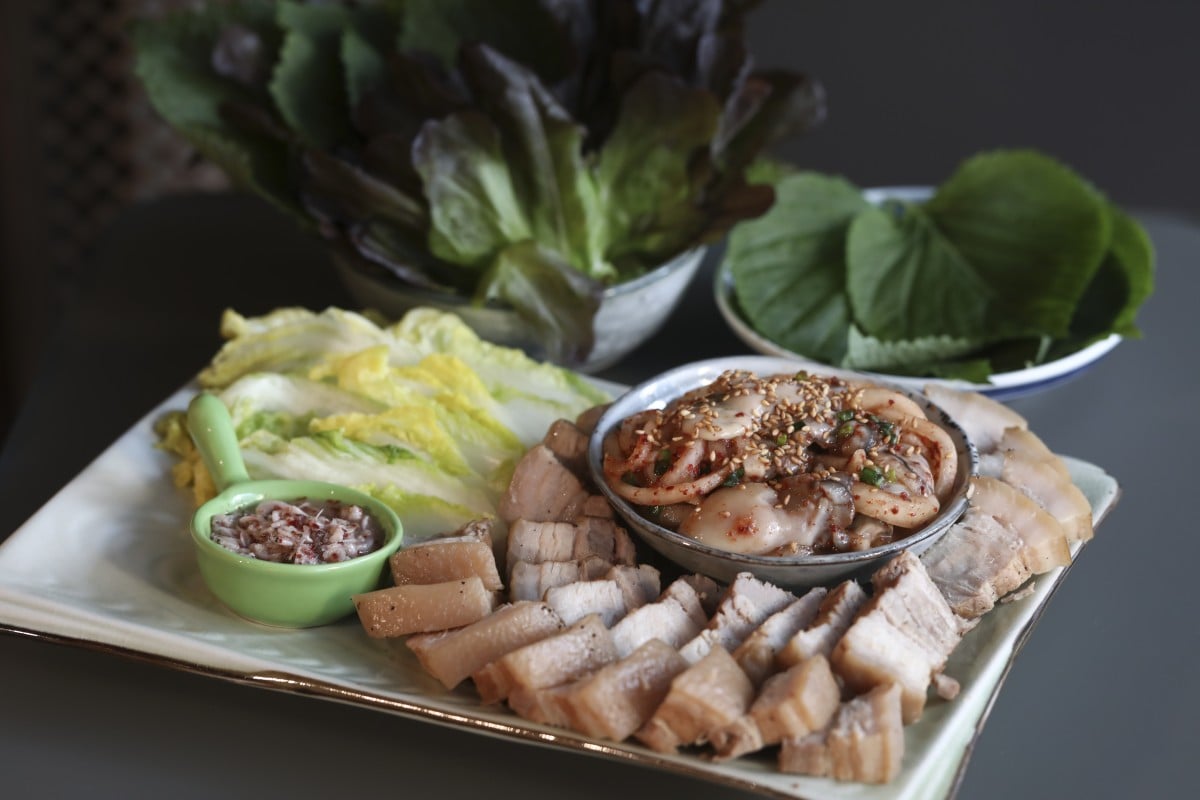 Pork belly bossam is so much more than what has been dismissively described as “boiled meat”. It is a lot more flavourful than you would expect. The tender pork is a neutral background to the other essential components – tangy, crunchy radish and oyster kimchi, salted shrimp sauce, and an array of leaves (including perilla, or sesame leaf) – that make the dish feel light.

The pork is simmered with aromatics such as ginger, garlic, onion and doenjang (fermented soybean paste), and a rather unusual ingredient: instant coffee. You don’t taste the coffee in the meat – it’s there to give the pork skin a more appetising pale brown colour.

The oysters for the kimchi should be small, prefer­ably no larger than 4cm (1½ in). I buy frozen Korean oysters (available in bags), but if you are feeling indulgent, use freshly shucked Kumamotos – as many as you are willing to put in the kimchi (but at least a dozen).

The leftover kimchi keeps for at least a week as the salt and other ingredients help to preserve the oysters. If possible, buy Korean radish for the kimchi; it has a sweeter flavour than the Japanese and Chinese varieties.

Oysters and pork are delicious together, but if you dislike oysters, leave them out.

Korean salted shrimp (saeu-jeot) comes in brine in small jars; it is not the same as Chinese salted shrimp, which is dry.

Cut the pork belly into strips about 4cm (1½ in) wide.

Thickly slice the onion and halve the spring onions and garlic cloves and put them in a pot that will hold the pork belly snugly in one layer. Lightly crush the peppercorns in a mortar (or wrap them securely in a paper towel and hit them with a meat mallet) and add them to the pot. Cut the ginger into thick pieces and add them to the pot, along with the doenjang, fish sauce, soy sauce, sugar and instant coffee.

Pour in 1 litre (1 qt) of water and bring to the boil over a medium flame. Lower the heat and simmer for 10 minutes. 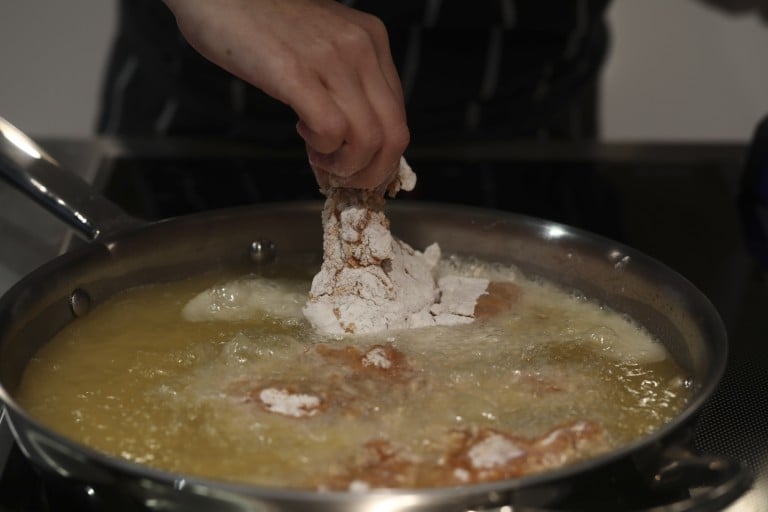 Put the pieces of pork belly into the pot. The liquid should cover the pork; if it doesn’t, add more water. Bring the water back to the boil, then lower the heat, cover the pot with the lid and simmer until the meat is tender (about one hour). When the meat is done, turn off the flame and leave until it’s time to serve. 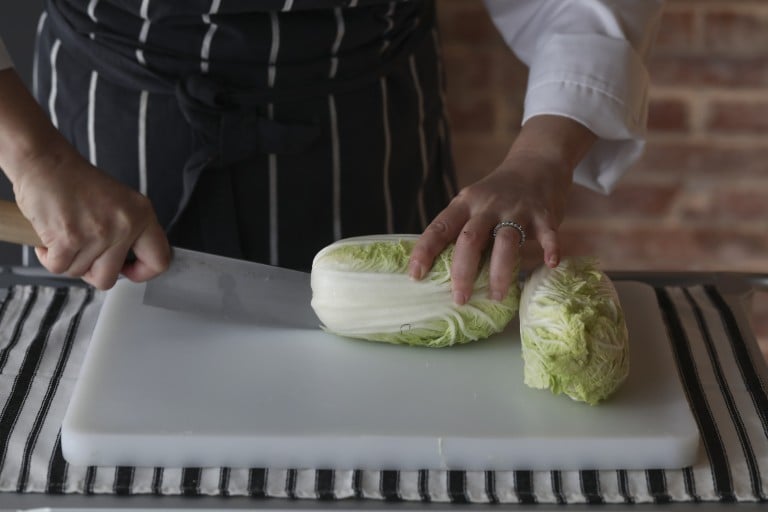 While the meat is cooking, prepare the other ingredients. Trim off the bottoms of the Chinese cabbages and remove the leaves one by one, so they stay whole. When you reach the small leaves (about 4cm [1½ in] or smaller) set them aside and use for another dish. Put the larger leaves in a colander and rinse thoroughly, then place them in a bowl and sprinkle with salt – the exact amount doesn’t matter. Leave at room temperature for about 30 minutes, or as necessary, mixing and turning over the leaves until they are thoroughly wilted: they should be able to bend almost in half without snapping.

When the cabbage is sufficiently wilted, fill the bowl with water and squeeze and rinse the leaves to remove the excess salt, changing the water as necessary. Tear off a small part of a leaf and taste – it should not be salty. Drain the leaves and squeeze out as much water as possible. Put the leaves on a clean, dry dishcloth, roll it tightly and squeeze to remove more moisture. 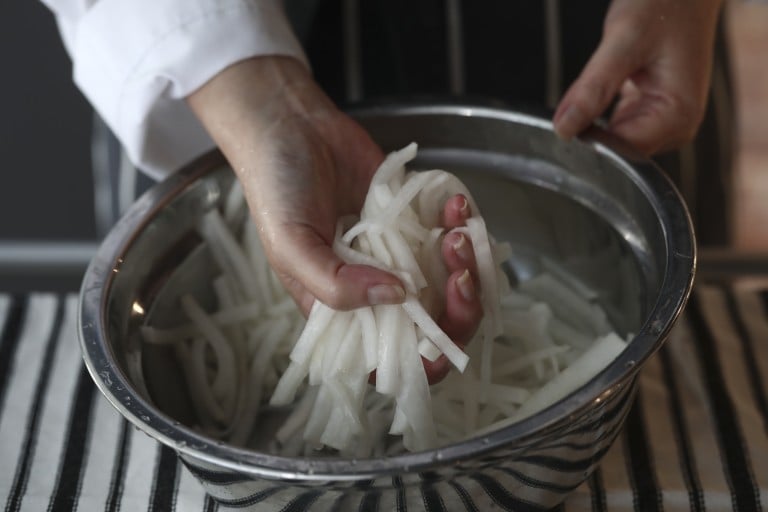 Make the kimchi. Peel the white radish and cut it into thick matchsticks. Put the radish pieces in a bowl and sprinkle with salt – again, the exact amount doesn’t matter. Leave for about 10 minutes, mixing occasionally, or until the pieces are wilted. Drain, rinse thoroughly with water and drain again. Taste a piece – it should not taste salty; if it does, rinse and drain again. Squeeze the pieces to remove as much moisture as possible, then lay them on a clean, dry dishcloth, roll tightly and squeeze to remove more moisture. 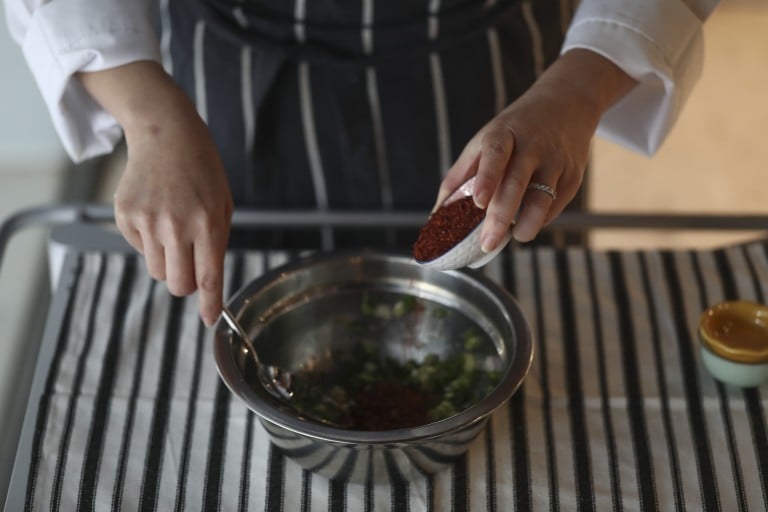 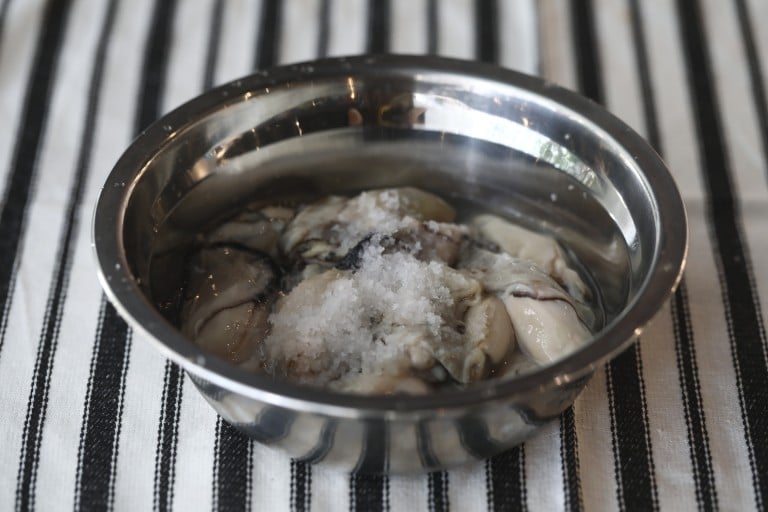 Place the oysters in a bowl, sprinkle with 10 grams (2 tsp) of salt and mix gently. Rinse them in a colander, then drain. Use paper towels to gently blot the oysters then add them to the radish mixture and carefully mix them in. Put the kimchi in a serving dish, sprinkle with sesame seeds and refrigerate until needed.

Put the salted shrimp in a small bowl and mix in the sugar, gochugaru (Korean chilli flakes) and 30ml (2 tbsp) of water. Sprinkle with sesame seeds.

Remove the pork belly pieces from the cooking liquid and blot them dry with paper towels. Slice the pork about 5mm thick and lay the pieces on a platter. Serve with the leaves, kimchi and salted shrimp sauce, accompanied by steamed rice and banchan (Korean side dishes)

To eat, dip a piece of pork belly into the salted shrimp sauce and lay it on whatever combination of leaves you like. Add some of the kimchi and fold up the leaf (or leaves) before eating.

13/13
Korean Dinner Pork Vegetables High-Fiber Low-Carb Dairy-Free Peanut-Free Medium
Diet definitions
Liking this recipe?
Now you can save the recipe you into your own collection.
Find us on facebook
Join our community and get the latest recipes from all over Asia for you to make at home.