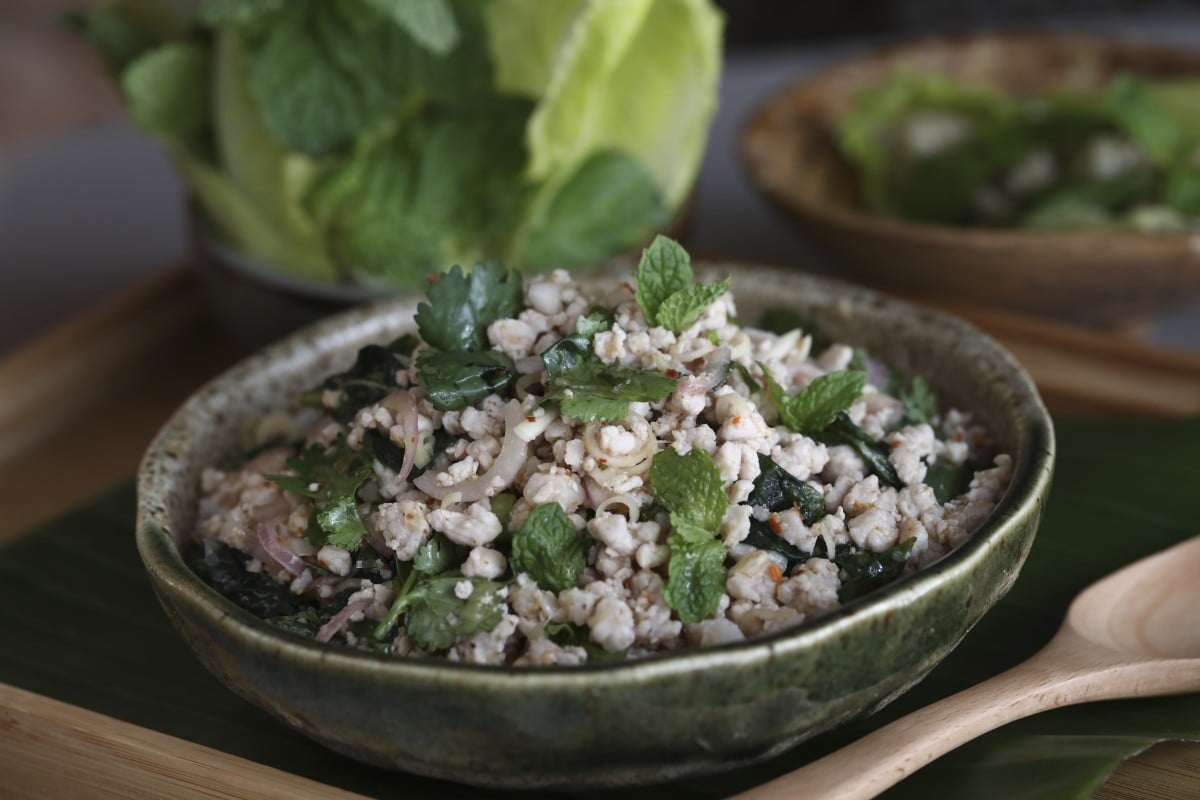 Larb, also spelled larp, laap, lahb or laab, can be made from all different types of protein. I’ve had it with fish, mushrooms, chicken, duck and, of course, pork.

Larb originated in Laos, but has spread across the border to Thailand and other neighbouring countries.

A shop specialising in larb will (or should) vary the seasonings according to the type of protein used, so one made with strongly flavoured meats such as water buffalo or duck will be seasoned more assertively than one made with more subtle fish.

Larb is served warm or tepid, not hot. There are many variations and the dish changes according to where the cook is from. For this version, the minced pork is cooked without being browned, before it is cooled slightly. Then the seasonings are mixed in, with the most fragile leaves added last so they don’t wilt too much. It is a light, brightly flavoured dish with plenty of fresh herbs, tartness from the lime juice and a hint of spice from the chilli flakes.

Khao khua, or toasted rice powder (sometimes called roasted rice powder) is made from glutinous rice grains. It’s used to slightly thicken watery sauces and adds a subtle, toasted flavour and a gentle crunch. You can buy it – look in the Thai section of shops – but it is also easy to make.

Put about 60 grams (2 oz) of raw glutinous rice in an unoiled skillet placed over a medium-low flame. Shake the pan almost constantly until the grains are pale brown, then cool to room temperature. Grind to a rough powder, using a spice grinder (this works best), a food processor or blender, or a mortar and pestle (which takes the longest). You need just a little of the rice powder for this recipe; put the leftovers in a small airtight jar for up to a month at room temperature, or in the fridge for longer storage.

Cut the shallots in half, then slice them as thinly as possible. Cut the garlic into thin slivers. Mince the spring onion. 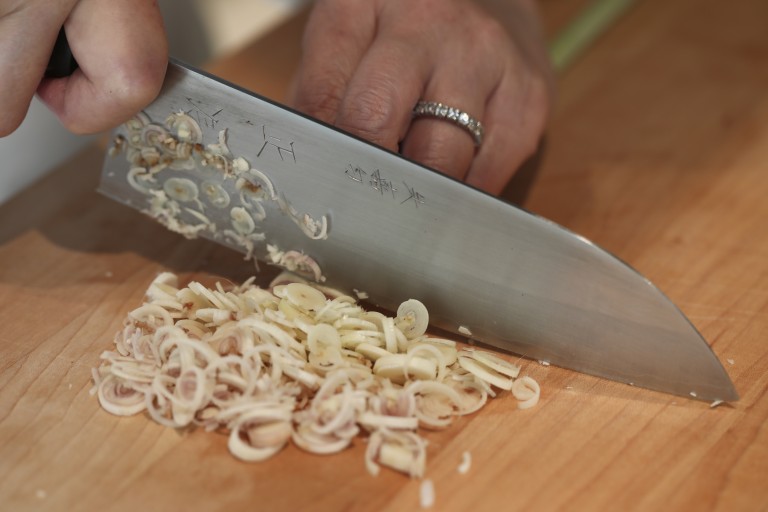 Remove the tough, loose outer leaves of the lemon­grass to reveal the tender core. Use a meat mallet or the flat side of a cleaver to lightly crush the entire length of the lemongrass stalks. Trim off and discard the stem, then cut the stalks as thinly as possible. Place a wok or skillet over a medium flame. When the pan is hot, add the cooking oil. Add the pork and use the wok spatula or a wooden spoon to crumble the meat into small pieces. Stir constantly to cook the meat without browning it. Transfer the meat to a medium-size bowl and let it cool slightly, stirring occasionally. While the meat is still warm, add the chilli flakes, sugar, fish sauce, lime juice, lemongrass, shallot, garlic and spring onion. Mix thoroughly, then taste the larb. Correct the seasonings, if necessary.

Sprinkle in the toasted rice powder and mix well. Add the mint leaves and coriander sprigs and mix gently.

Scoop the larb into a serving dish and garnish with the mint sprigs. Serve the larb with the romaine lettuce leaves. The crisp lettuce can be eaten between bites of the larb, or used as lettuce cups to hold the larb.

6/6
Thai Appetiser Pork Low-Carb Dairy-Free Gluten-Free Peanut-Free Easy
Diet definitions
Liking this recipe?
Now you can save the recipe you into your own collection.
Find us on facebook
Join our community and get the latest recipes from all over Asia for you to make at home.