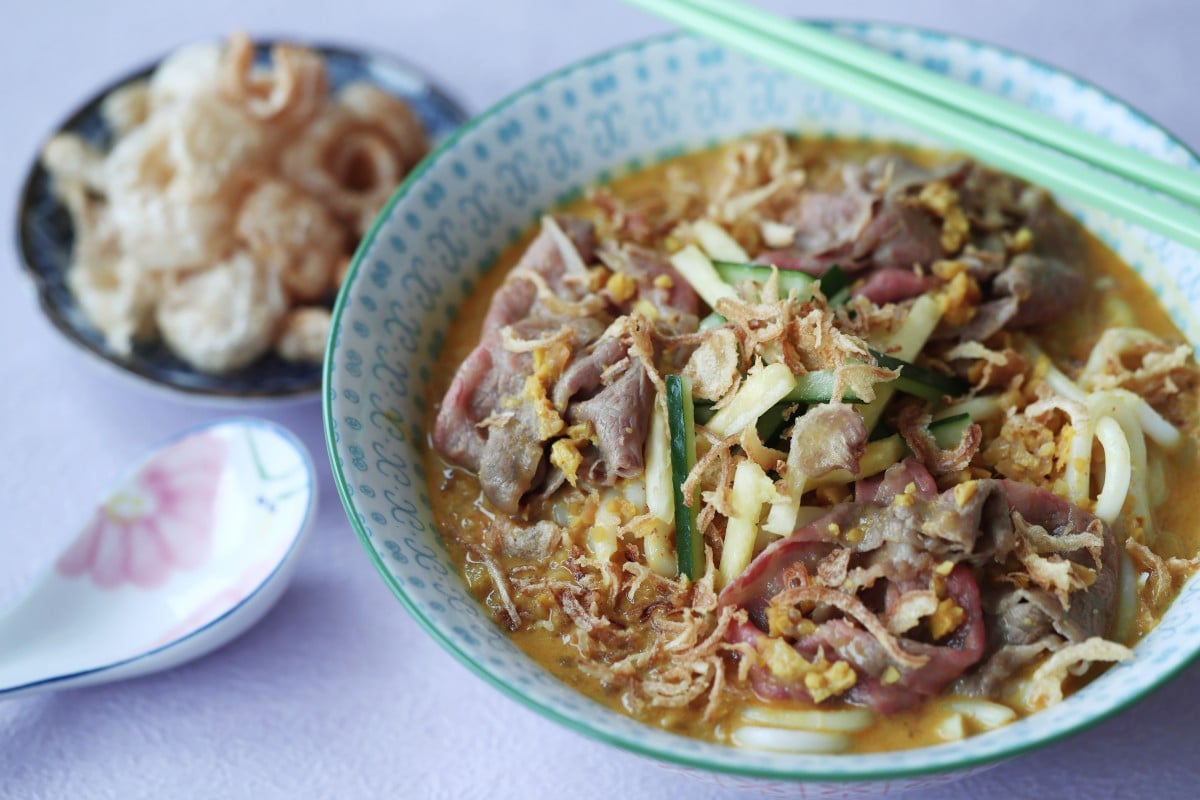 The recipe for this noodle dish was inspired by a picture I saw on a friend's Instagram feed. The original dish featured instant noodles (without the flavour pack) simmered in satay broth that had been used to cook hotpot ingredients, so the soup, I imagine (since I wasn't there), must have been very richly flavoured.

I tried making a version by adapting my usual satay recipe, combining both the marinade and the sauce and increasing the amount of some ingredients while using less of others. To my surprise, it worked.

This a very rich soup that makes a delicious, hearty lunch on a cold day. But if you like, use the satay soup as my friend did - poach hotpot ingredients in it first, then when you're almost full, boil some udon noodles and put them into bowls, add a few pieces of thinly sliced beef, and ladle the hot broth over the top before adding the garnishes.

You can make the spice paste by pounding the ingredients in a large mortar, or by grinding them in a high-speed blender (such as a NutriBullet). For the peanuts, however, use a mortar, not a blender, so they have more texture; you don't want to end up with peanut butter. If you don't have a mortar, roughly chop the nuts.

Buy the thinly sliced beef intended for hotpot, sukiyaki or shabu-shabu, using lean or fatty meat, whichever you like.

If you want to make a vegan version of this dish, use vegetable stock instead of chicken stock, and substitute bean curd puffs (or pan-fried firm bean curd) for the sliced beef.

Fried shallots are sold in the Thai and Vietnamese section of supermarkets. If you can't find them, make your own by frying thinly sliced shallots in oil until brown (about 5 minutes). Drain them on paper towels, then spread them on a tray and bake them until crisp in a 180°C (350°F) oven.

Lay the lemongrass stalks on a cutting board and crush them by hitting them sharply with the flat side of a cleaver or chef's knife. Finely chop the lemongrass, galangal, shallots and garlic. Put these ingredients with the coriander (cilantro) seeds in a mortar and pound to a rough paste. Add the sugar, turmeric, curry powder and salt and pound again to combine. (Or put all the ingredients in a high-speed blender and grind to a rough paste.) Scrape the spice paste into a medium-sized soup pot. 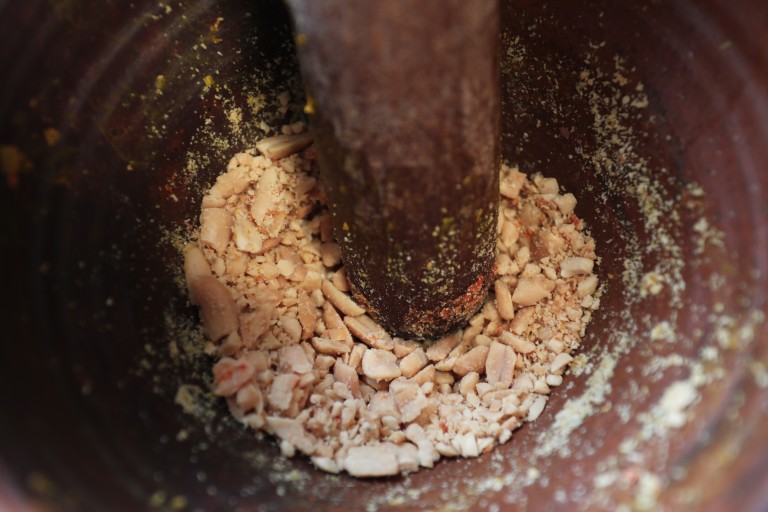 Put the toasted peanuts into a mortar and pound them until they are roughly crushed. Add the Thai red curry paste and pound again.

Pour the cooking oil into the pot holding the spice paste. Place the pot over a medium flame and stir constantly until the paste starts to sizzle. Continue to cook, stirring constantly, until the paste starts to stick to the bottom of the pan. Add the peanut/curry paste mixture and stir for about a minute. Mix in 800ml (3⅓ cup) of the chicken broth and bring to a simmer. Turn off the flame and set aside while preparing the other ingredients.

Heat a large pot of water and, when it boils, add the udon noodles. Separate the strands of noodles with chopsticks and cook for about 30 seconds, or until done, then drain through a colander. Prepare whatever garnishes you are using.

Put the soup pot back on a medium flame and bring to the boil, then stir in the coconut milk. When the mixture simmers, taste the soup and correct the seasonings, if necessary. It should taste slightly sweet and spicy. If it needs more palm sugar or curry paste, ladle some of the hot soup into a bowl, then add the sugar or curry paste and stir until dissolved (if you add these ingredients straight into the soup pan, they might not dissolve entirely). If the soup is too thick, thin it out by stirring in the remaining chicken broth.

Rinse the udon noodles with hot water, then divide them between four to six bowls. Lay the sliced beef over the noodles, then ladle the soup on top; because the beef is sliced very thin, the heat of the soup will poach it to a nice medium-rare. Serve the soup, letting your guests add whatever garnishes they want.

6/6
Fusion Main Course Beef Noodles Medium
Liking this recipe?
Now you can save the recipe you into your own collection.
Find us on facebook
Join our community and get the latest recipes from all over Asia for you to make at home.