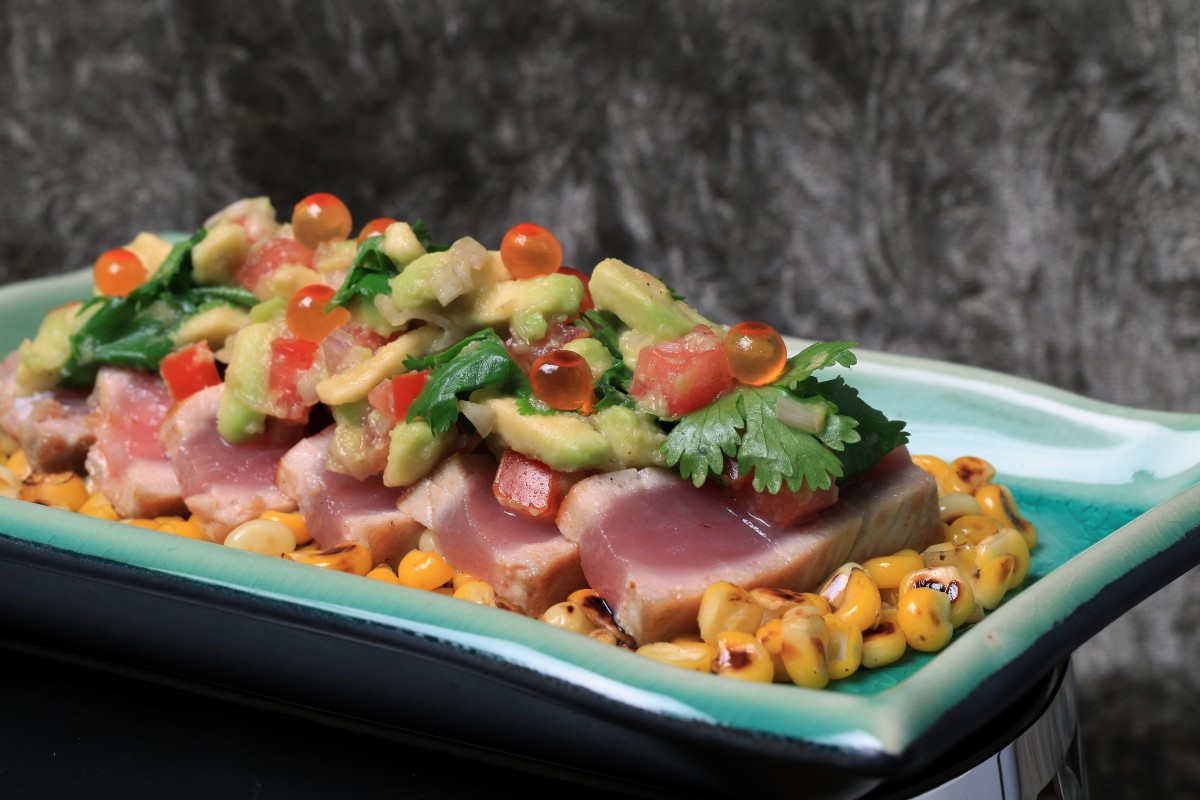 There's an optional step in this easy dish which subtly boosts the flavour without adding salt: wrapping the fish for a day or two in kombu, also known as giant kelp. Japanese chefs do this often - sometimes for a week or longer - because it helps to age the fish, changing the texture, and also to add flavour because kombu is a great source of umami. After the fish has been aged, this dish takes less than 30 minutes to prepare.

If you don't want to use the kombu, or don't have the time, brush the fish with soy sauce before searing it very quickly in a blazing hot skillet, preferably cast iron.

Ikura (cured salmon roe, also known as salmon caviar) and kombu (which is sold dried in packs) can be purchased from shops specialising in Japanese ingredients.

If using the kombu, soak one or two pieces (depending on size) in warm water for about 10 minutes, or until pliable. Blot the kelp with paper towels. Wrap the pieces of fish in the kombu to enclose them completely, then place on a tray and refrigerate for one or two days.

Use a sharp knife to cut the corn kernels from the ear.

Heat about 10ml (2tsp) of cooking oil in a skillet placed over a medium-high flame. When the oil is hot, add the corn and a little salt. Stir-fry until the corn is lightly charred; take care, because the kernels might pop. Remove the corn from the skillet and leave it to cool. Wash out the skillet.

Dice the cherry tomatoes and mince the shallot. Cut the chillies into thin rounds, shaking out and discarding the seeds as you go.

Cut the avocado in half and remove the pit. Carefully cut the avocado into cubes while it's still in the shell. Use a large spoon to scoop the avocado from the shell and put it into a bowl. Gently mix in the tomatoes, shallot and chilli, then season to taste with lime juice and salt.

Remove the kombu from the tuna. If you didn't use kombu, brush the tuna fillets with soy sauce.

Heat the skillet over a high flame and coat it lightly with oil. When the skillet is very hot, place the tuna fillets in it and sear them one side, then flip them over and sear the other side. This should take about 30-45 seconds in total, depending on the thickness of the fillets and if you like the fish rare or medium-rare.

Sprinkle the tuna with fine sea salt salt, then slice the fillets about 8mm thick.

Put the corn on a serving platter or two dinner plates and add the tuna slices. Top with the tomato and avocado salsa. Spoon the ikura over the salsa and garnish with coriander leaves.

Sprinkle rough-flaked sea salt over the ingredients, then serve immediately.

10/10
Susan Jung Fusion Dinner Fish Vegetables High-Fiber Dairy-Free Gluten-Free No-Sugar Peanut-Free Pescatarian Easy
Diet definitions
Liking this recipe?
Now you can save the recipe you into your own collection.
Find us on facebook
Join our community and get the latest recipes from all over Asia for you to make at home.