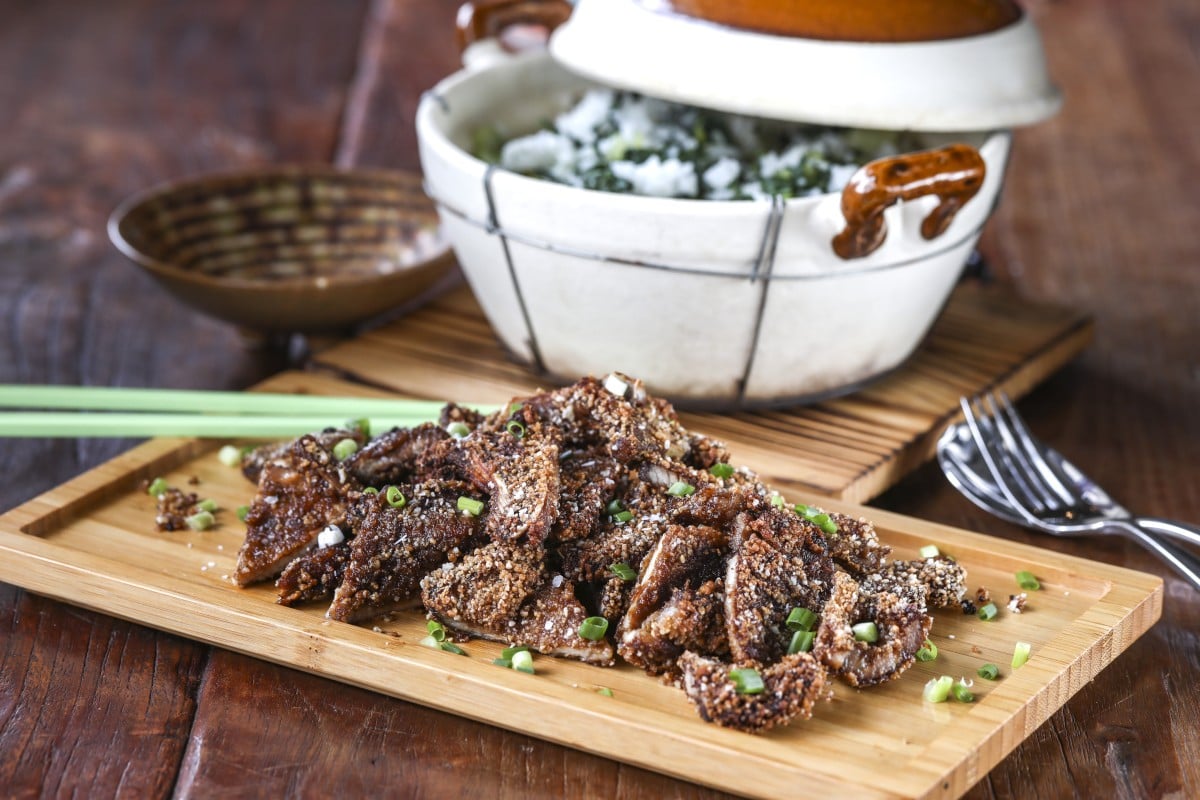 Shanghainese pork chop and vegetable rice is an all-in-one dish: you get everything you need on a plate (or in a bowl) – carbs, vegetables and meat. I make the rice with as much vegetable as grain, so it is lighter than what you find in restaurants. I also like to mix in a bit of lard (or rendered chicken fat) at the end, which makes the rice more fragrant and delicious. If you don’t have either fat on hand, mix in a small amount of sesame oil.

Marinate the pork chops for at least an hour, although longer (three to four hours) is better. To tenderise the pork, you need a meat mallet (also called a meat tenderiser), a heavy, handheld implement made of metal or wood (I prefer metal) that resembles a large hammer with dull spikes on one side and a flat surface on the other.

Some people claim you can use other hard objects, such as a rolling pin, small metal pan or wine bottle, as a substitute. They are wrong. Both surfaces of the meat mallet are small enough to get into the contours of most bones, unlike a rolling pin or metal pan. And unlike a wine bottle, you don’t have to worry about it breaking. (Do you really want to pound some­thing with glass?) I use both sides of the mallet to pound the chops – the spiked surface, which tenderises, and the flat surface, which tenderises and also flattens the meat so it cooks quickly.

Of the several types of coating I have tried for the pork chops, my favourite is Gogi (or Kogi) powder from Thailand. On the label it states that it is tempura flour, but it is not the same as Japanese tempura flour. Buy the unseasoned type that contains just plain flour, tapioca flour and leavening. I also like water chestnut flour (or starch), but that is difficult to find outside Chinese markets. Panko – Japanese breadcrumbs – are good too, as is cracker meal. Flour and cornstarch are acceptable in a pinch.

Lay a paper towel on a cutting board and put a pork chop on the towel (this prevents the meat from sliding around). Pound the pork with the spiked side of the meat mallet. Flip over the pork chop and pound the other side with the spiked surface. Flip it over again and use the flat side of the mallet to pound the pork chop so it’s about half its original thickness. Do the same with the remaining pork chops then place them in a large bowl.

Put the soy sauce, rice wine, sugar, salt , five-spice powder and white pepper in a small bowl and stir to combine. Finely mince the garlic, add it to the bowl and mix well.. Pour this marinade into the bowl with the pork chops and mix, making sure the marinade coats the surface of the meat. Leave at room temperature for at least an hour (and up to four, although refrigerate it if it’s warm). Mix occa­sion­ally so the pork chops are evenly coated.

While the meat is marinating, pour the rice into your rice cooker of choice (a Chinese clay pot is best, but you can also use an electric cooker or cook the rice on the stove in a medium-size pan). Wash the rice in several changes of water, then drain. Add enough water to the rice so the total weight is 660g (23⅓oz). Leave it to soak for at least 30 minutes.

While the rice is soaking, prepare the pak choi. Wash the vegetable, rinsing thoroughly between the outer leaves, where dirt tends to collect. Thinly slice the vegetable. Bring a large pot of salted water to the boil, add the pak choi and stir immediately. Leave for 30 seconds, then drain, rinse with cold water and drain again. Squeeze out as much water as possible from the pak choi. 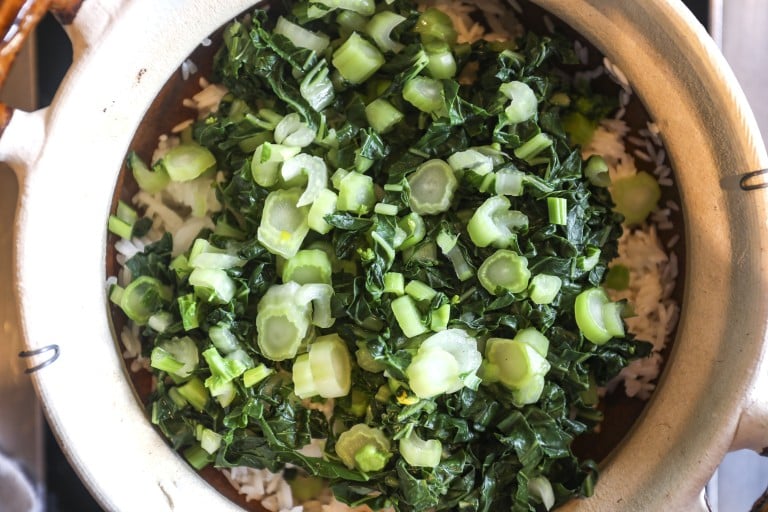 Cook the rice, either in an electric rice cooker or in a pot on the stove. When the rice is about five minutes from being done, lift the lid, quickly spread the vegetable over the rice, then replace the lid and finish cooking. Keep the rice hot until the pork chops are done. 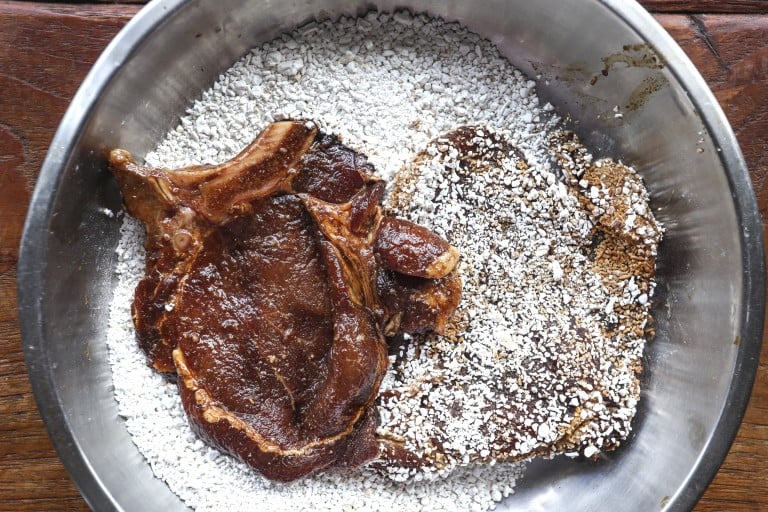 Spoon some of your coating of choice into a flat pan. Take one chop and dredge it in the coating to cover the entire surface, pressing on it firmly so it adheres. Shake the pork chop to remove any excess coating.

Carefully lay the chop into the hot skillet – you should be able to fry two in each batch. Fry the pork chops for three to five minutes, or until fully cooked, turning them over twice. Drain on paper towels. Add more oil to the skillet, if necessary.

After frying all the chops, lift the lid on the rice cooker, then add the lard (or chicken fat or sesame oil) and sprinkle in the salt. Stir well with the rice paddle, then scoop into bowls.

10/10
Susan Jung Chinese Dinner Pork Rice Vegetables Medium
Liking this recipe?
Now you can save the recipe you into your own collection.
Find us on facebook
Join our community and get the latest recipes from all over Asia for you to make at home.