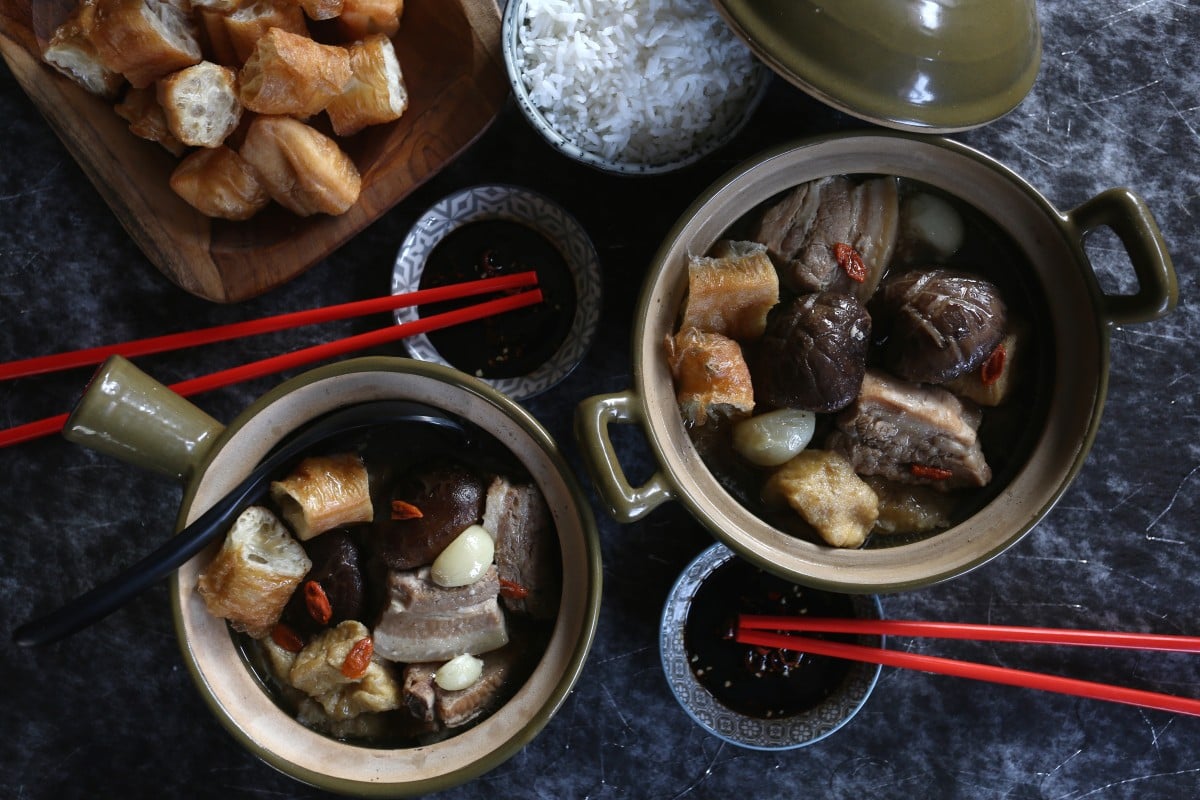 You'll find very different versions of bak kut teh ("pork bone tea") in Singapore and Malaysia. The former is strong, almost hot, with pepper, especially white pepper, while the Malaysian style is fragrant with Chinese herbs and spices. I love both, but the ingredients for the latter can be difficult to find, so at home, I cook the Singaporean version.

I use whole peppercorns and grind them myself because the flavour is better than the pre-ground spice. The result is quite peppery, and if you want it milder, use only two teaspoons of white peppercorns. Cassia bark is often labelled as cinnamon, even though it is not the same. True cinnamon is thin and easy to break into pieces using just your fingers, while cassia bark is thicker and harder.

Put the pepper, cassia bark and star anise into a spice bag (which looks like a tea bag) that's large enough for the spices to swim – if the bag is too small, the spices won’t release their flavour. Be sure to secure the top of the bag with twine, or the spices (especially the crushed pepper) might escape.

Bak kut teh is the perfect dish to make in a multicooker or pressure cooker, but if you don't have either one, just simmer it on the stovetop in a regular large pot - it will just take longer.

Broths cooked under pressure are clearer than those made conventionally, which need to be skimmed to remove impurities. I still like to blanch the bones first, though, which adds a step (and about 10 minutes) to the process. I do this in a regular pot rather than the multi­cooker, because by the time you heat it, cook briefly, then let it cool sufficiently to open the lid, you don’t save any time.

If you use a stovetop pressure cooker, which has higher pressure than an electric multicooker, cook the bak kut teh for about 30 minutes in total, or until the meat is tender. 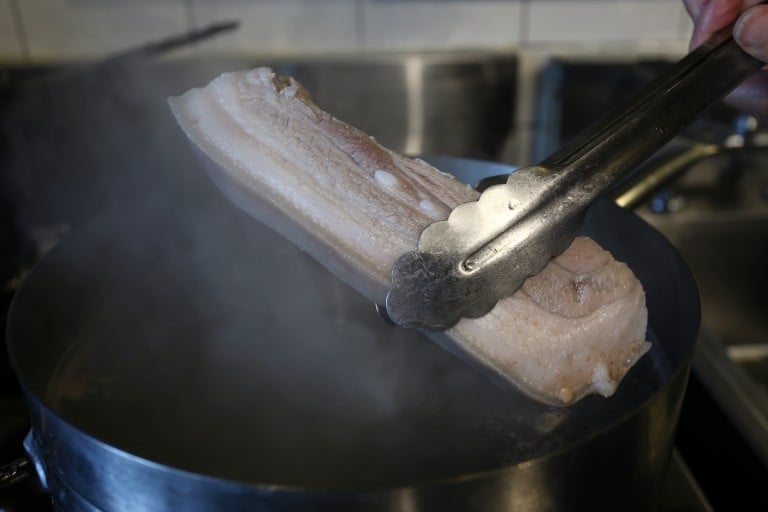 Cut the pork belly into four to six pieces. Rinse the spare ribs and pork belly under cool running water, then put them in a large pot. Add boiling water to cover the meat by about 3cm (1¼in), then bring to a boil over a high flame. Simmer for about two minutes, then drain. Rinse the meat and bones with cool running water, then place the pieces into the multicooker pot. 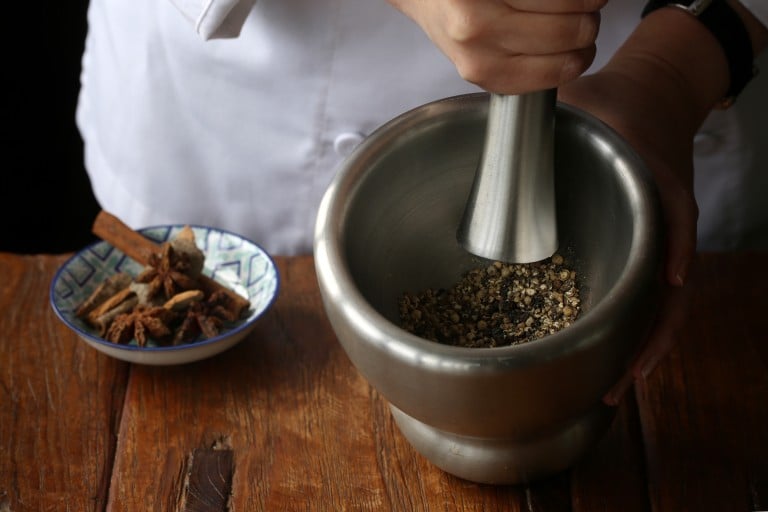 Finely crush the white and black peppercorns into almost a powder, using either a spice grinder or mortar and pestle. Put the crushed pepper in a filter bag and add the cassia bark and star anise. Secure the bag with twine and place into the multicooker pot.

Remove the outer layers of skin from the garlic, leaving the cloves attached at the base. Rinse the mushrooms under running water.

Put the garlic and mushrooms into the pot with the pork and spices, then add the soy sauce, fish sauce, 5g (1 tsp) of salt and 1.8 litres (1.8 quarts) of boiling water. Put the pot in the multi­cooker, close the lid and, using the pressure-cooker setting, cook for 30 minutes (start timing once it reaches pressure). (If cooking on the stove, bring to a boil, partially cover with a lid, then lower the flame and simmer for an hour. Occasionally skim the surface to remove impurities.) 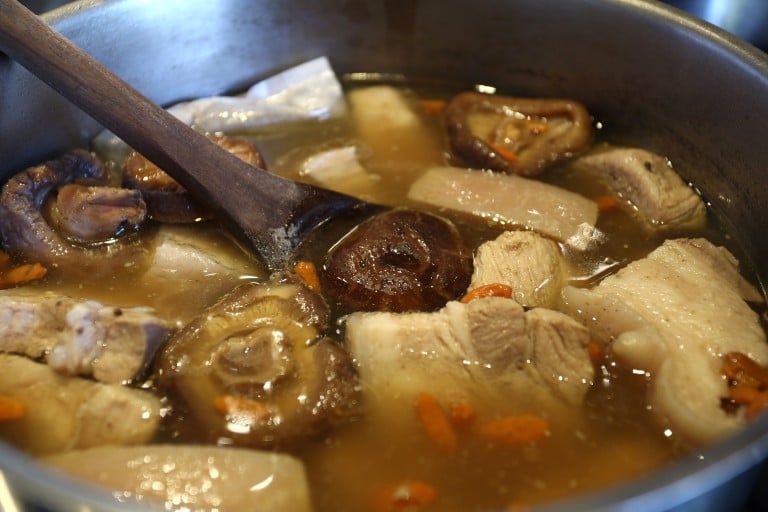 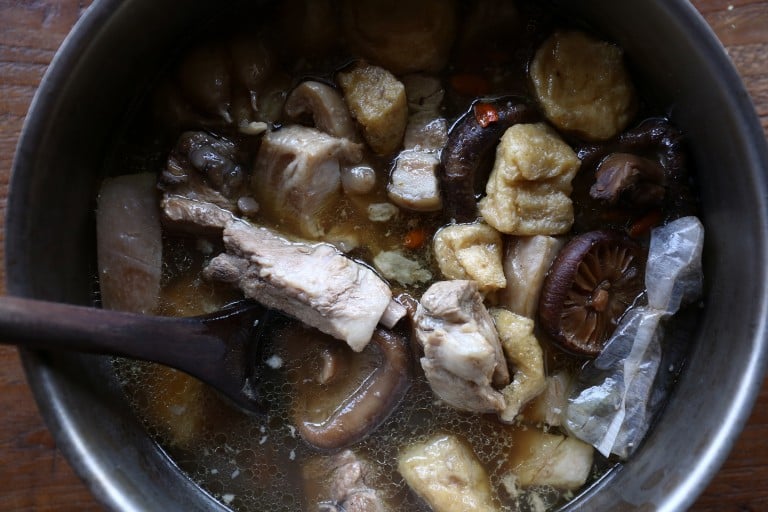 Quick-release the pressure on the multicooker. Check the meat and ribs - they should be tender. Taste the broth and add more salt, if necessary.

Finely mince a few bird’s-eye chillies and divide them between four to six small sauce dishes, adding soy sauce to each.

Ladle the bak kut teh broth into four to six individual serving bowls, adding portions of spare ribs and pork belly. Serve with hot rice, the yau ja gwai and the chilli soy dipping sauce for the meat.

9/9
Susan Jung Singaporean/Malaysian Dinner Pork High-Fiber Low-Carb Dairy-Free No-Sugar Peanut-Free Easy
Diet definitions
Liking this recipe?
Now you can save the recipe you into your own collection.
Find us on facebook
Join our community and get the latest recipes from all over Asia for you to make at home.