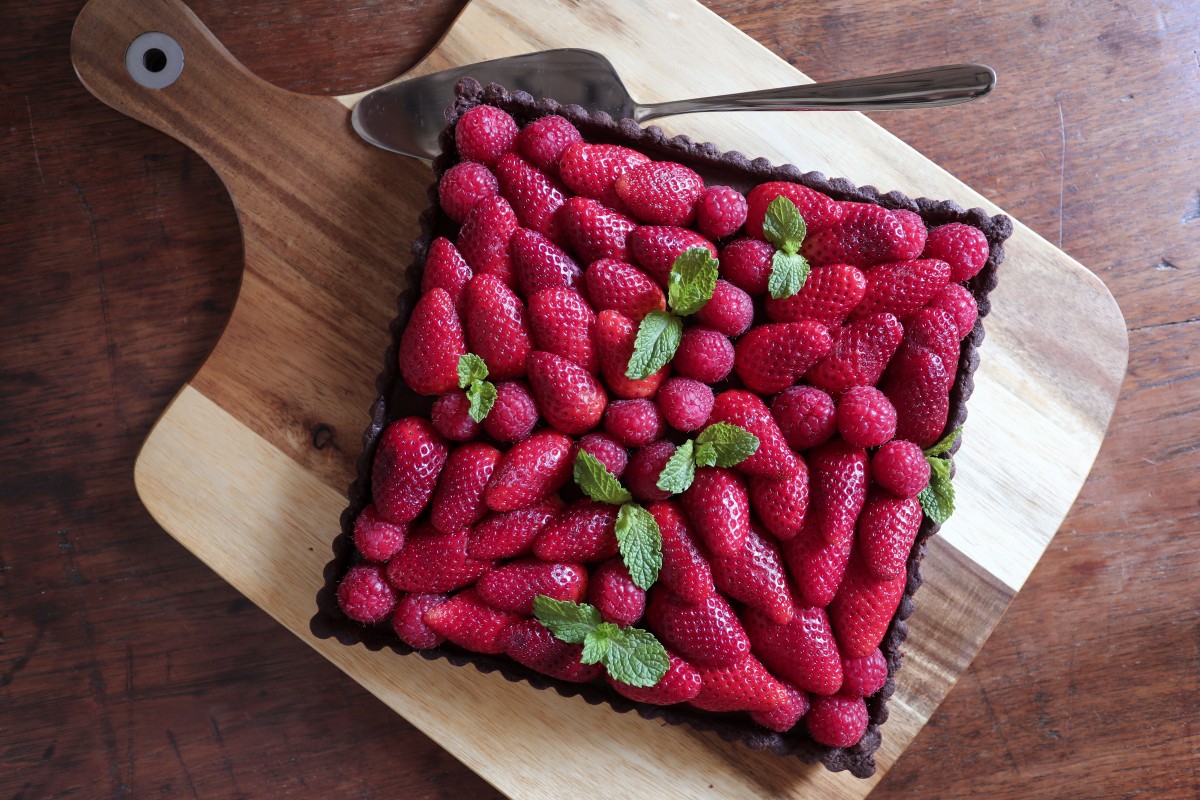 This pretty tart looks light and summery but under­neath all the fruit is a rich chocolate ganache that has a hint of spice and a small dose of alcohol. I used a 22cm (9in) square tart pan, but if you don’t have one, use a pan with a similar base area.

A ganache is like any other emulsion – you have to slowly combine the fat (in this case, chocolate and butter) and the liquid (the cream) so the fat stays stable. If you mix them too quickly, the fat will separate out and rise to the top; it doesn’t affect the taste, but it’s not as pretty. I use an immersion blender (sometimes called a hand blender); it works better than a regular whisk.

It’s hard to judge the amount of chilli to add to the ganache because the heat level varies, even within the same variety of chilli. I would start with just one chilli and a small amount of chilli flakes (I use Korean gochugaru) and mix in more later, if you like; it’s easy enough to add more, but extremely difficult to take away.

As with all pastry recipes, it's best to weigh the ingredients, instead of using cups and spoons.

Make the tart dough. Put the flour, cocoa powder, icing sugar and salt in the bowl of a food processor and mix thoroughly. Cut the chilled butter into 1cm (7/16 in) chunks and add them to the processor. Pulse briefly until the butter is about the size of peas. Transfer the ingredients to a medium-sized bowl. (If you don't have a food processor, sift the icing sugar, then put it in a bowl with the flour, cocoa powder and salt and mix well. Cut the chilled butter into 1cm (7/16 in) chunks, add them to the bowl and mix so the butter is coated with the dry ingredients. Working quickly, use your fingertips to pinch the butter into smaller pieces until they are about the size of peas, then proceed with the rest of the recipe).

Whisk the egg and drizzle it over the ingredients. Mix the ingredients by hand to form a cohesive dough. Knead the dough briefly then wrap with cling film and refrigerate for at least an hour.

If the dough has been chilled for longer than two hours, leave it at room temperature until it’s pliable but still cool. Roll out the dough on a lightly floured work surface into a large squarish shape about 3mm (⅛in) thick. Drape the dough over a 22cm (8⅔in) square tart pan with a removable bottom and fit it gently, without stretching, into the contours. Double over the dough at the sides of the pan and press firmly so it adheres. Trim off the overhang so the dough is flush with the edges. (There will be quite a lot of excess dough; refrigerate or freeze it, then use it to make tartlets.) Refrigerate the tart shell for at least 30 minutes while preheating the oven to 200°C (390°F).

Use the tines of a fork to poke holes into the bottom of the tart shell, so the dough doesn't puff up in the oven.

Cut a 30cm (12 in) square of aluminium foil and press it directly onto the surface of the tart shell, fitting it into the contours. Carefully pour uncooked rice or beans into the foil-lined tart shell (this weighs down the dough so it doesn’t puff up) and place in the oven. Bake at 200°C (390°F) for 10 minutes then turn the heat to 180°C (350°F) and cook for another 10 minutes. Carefully lift out the foil (along with the rice or beans). Conti­nue to bake the tart shell for about 10 more minutes, or until it is fully baked – it will be fragrant and matte on the surface. If any of the dough puffs up, gently press it down with a spatula while it’s still hot. Cool to room temperature. 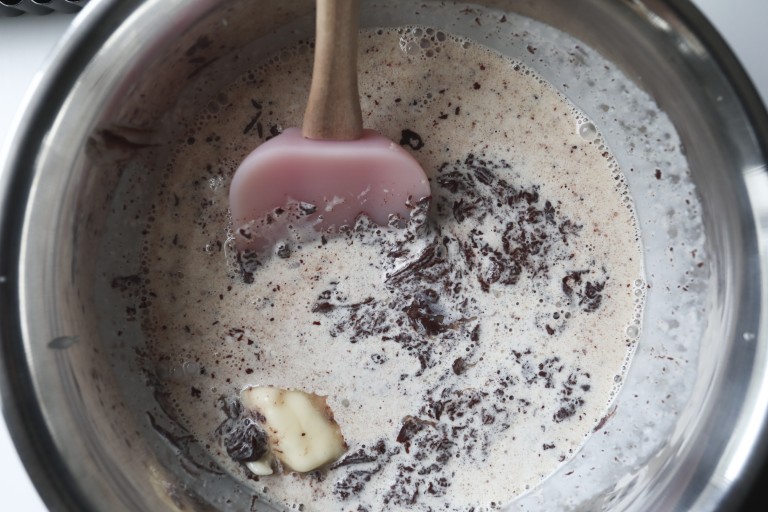 While the tart shell is baking, make the ganache. Cut the chilli in half and scrape out and discard most of the seeds. Chop the chilli flesh then put it in a saucepan. Add the cream and chilli flakes then bring to a simmer. Turn off the heat and leave to infuse for 30 minutes. Taste the cream – it should be tolerably spicy (the chilli heat will be diluted when you add the other ingredients). If it’s not spicy enough, mix in another chopped chilli (or part of one) and/or more chilli flakes and bring to the simmer again, then leave to infuse for another 30 minutes.

Finely chop the chocolate then put it into a medium-sized mixing bowl and add the butter. Bring the cream back to a simmer then strain it through a fine sieve directly into the bowl holding the chocolate and butter. Leave for a few min­utes without stirring.

Put the blade part of the immersion blender into the bowl, so it touches the bottom. Put the blender speed on low - because of the design of the blender, it will start mixing the melted chocolate at the bottom of the bowl before it slowly incorporates the rest of the chocolate along with the cream and butter. Move the blender around slowly in the bowl. When the ingredients are smooth and shiny, blend in the liqueur. (If you don’t have an immersion blender, melt the chocolate and butter together, either in the microwave [stir every 30 seconds until the chocolate is 80 per cent melted, then whisk until smooth] or in a bowl placed over a double boiler [stir almost constantly]. Heat the cream until it simmers, then add it a little at a time to the chocolate/butter, whisking thoroughly between additions to create a smooth, shiny emulsion. After adding all the cream, whisk in the liqueur.)

Remove the stems and cores from the strawberries. Slice the strawberries in half. Lay the straw­berries and raspberries over the ganache, then add mint leaves. Serve in small slices – it’s very rich.

10/10
Susan Jung Fusion Dessert Medium
Liking this recipe?
Now you can save the recipe you into your own collection.
Find us on facebook
Join our community and get the latest recipes from all over Asia for you to make at home.