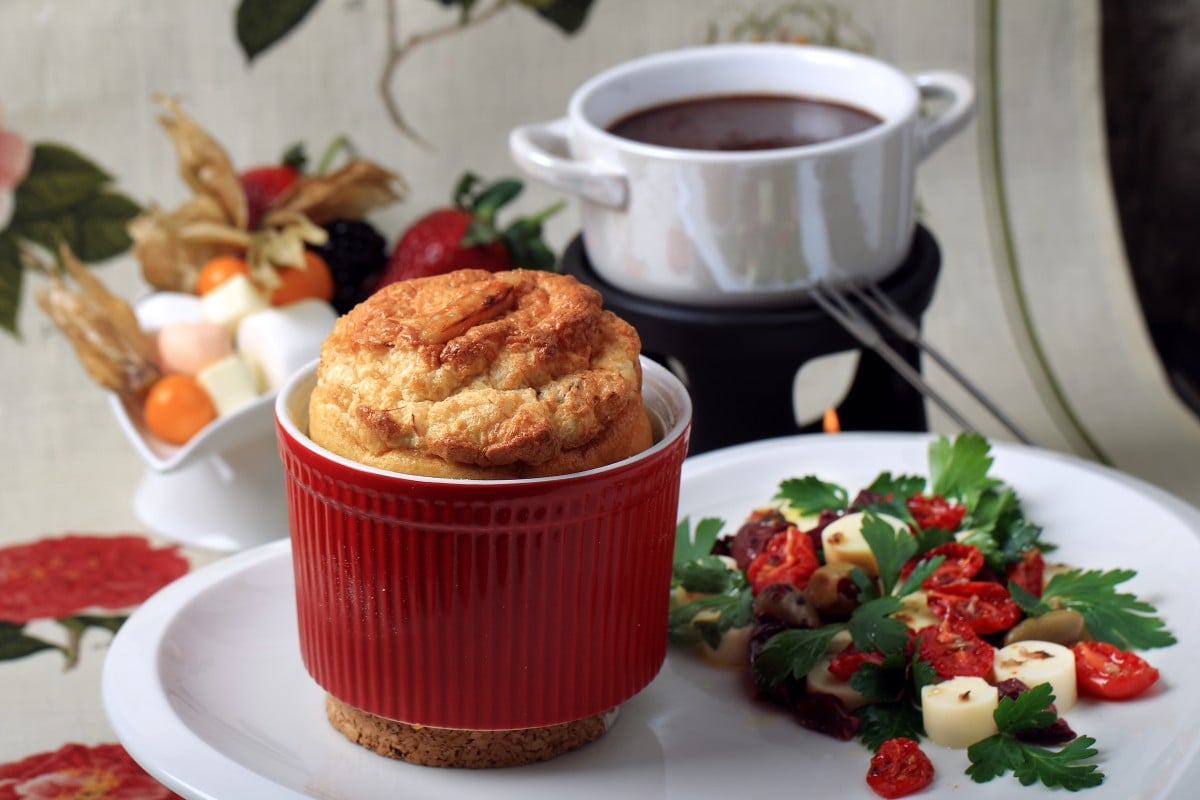 People are often intimidated by soufflés, but actually, they're not difficult. The most important part of making them comes at the end, when you're serving them: have your guests ready and waiting at the table, because the soufflés will start to deflate shortly after you remove them from the oven.

I use gochugaru (Korean chilli flakes) to season the soufflés, plus some fish sauce, which adds umami.

If you want to serve these as a main course, instead of a starter, divide the mixture between three ramekins that hold 300ml (1¼ cup) each.

Melt 45g (1½ oz) of butter in a small saucepan, add the shallot and garlic and cook over a low flame until soft and translucent.

Add the chilli flakes and stir briefly. Add the flour and stir constantly until it forms a thick paste. If there's any butter separating out from the flour, add a little more flour until it forms a cohesive mass. Cook the mixture for three minutes over a low flame, stirring constantly.

Add the milk a little at a time, using a whisk to fully incorporate it into the flour mixture. It will be very thick at first, but will then thin out as you add more milk.

When all the milk has been added, whisk in the fish sauce, then season with a little grated nutmeg. Bring to a simmer then turn the heat to very low and stir almost constantly for three minutes.

Remove the pan from the flame and leave to cool for about 10 minutes, stirring frequently. While the mixture is cooling, separate the eggs, putting the yolks into one small bowl, and the whites into a medium-size bowl along with the extra egg whites.

Add one egg yolk at a time to the flour/milk mixture, whisking it in as soon as it's in the pan and stirring vigorously so the egg doesn't cook. Scrape the mixture into a large metal bowl and cool to room temperature, whisking often. Lay a sheet of cling-film directly over the surface of the mixture then refrigerate for about 30 minutes, or until chilled.This can be done up to several hours in advance.

About 30 minutes before you want to bake the soufflés, preheat the oven to 220° C (430° F). Prepare four deep ramekins that hold about 225 grams (1 scant cup) each: liberally butter the interiors, coat them with fine breadcrumbs and shake out the excess. Use the tip of your thumb to clean the rim of the ramekins, about 5mm (¼ in) from the top, to remove any butter and breadcrumbs. Pour water to the depth of about 2.5cm (1 inch) into a pan large enough to hold the ramekins without touching each other.

Mix the crabmeat into the soufflé base and taste it for seasonings. Season with salt and pepper and more chilli flakes (if necessary), overseasoning it slightly because the flavours will be diluted when the egg whites are folded in.

Use an electric mixer on medium speed to whip the egg whites with one-quarter teaspoon of salt until frothy. Turn the mixer speed to high and continue whipping until the whites form medium-firm peaks.

Add one-third of the whipped whites to the soufflé base and mix it in to lighten it. Quickly but gently fold in the remaining whites in two additions, trying to maintain as much volume as possible. Pour the mixture into the prepared ramekins and smooth out the surface.

Put the ramekins in the pan with the water and bake at 220° C (430° F) for 10 minutes. Lower the heat to 180° (350° F) and continue baking for 15-20 minutes, or until the soufflés have risen and are browned on top and gently set - they should be a little wobbly when the ramekins are shaken but the surface should be firm. Serve immediately.

12/12
Fusion Appetiser Shellfish No-Sugar Peanut-Free Pescatarian Medium
Diet definitions
Liking this recipe?
Now you can save the recipe you into your own collection.
Find us on facebook
Join our community and get the latest recipes from all over Asia for you to make at home.