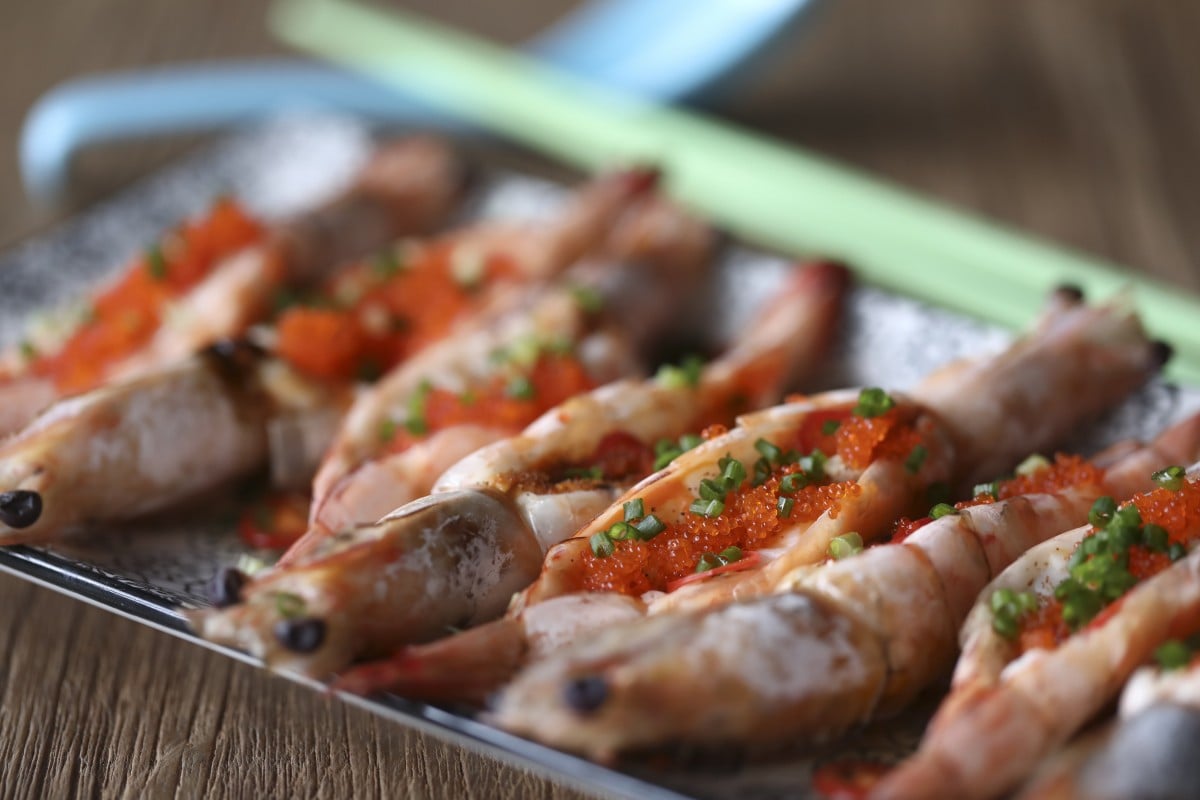 The words “shrimp” and “prawn” are often used interchangeably, depending on where the person saying them comes from: Britons and Australians tend to refer to all types of these crustaceans as prawns, while in the United States, it’s usually shrimp.

The distinction has nothing to do with size – shrimp are not necessarily smaller than prawns – but anatomically, they are different. The most obvious difference is that prawns have back shell “plates” that overlap starting at the base of the head and get smaller towards the tail, while with shrimp, the second shell plate overlaps the one in front, going towards the head, and the one behind it.

Many people think shrimp come only from the sea and prawns only from fresh water, but that’s not true: carabineros prawns are caught from the ocean while the tiny, delicate shrimp served in Shanghainese restaurants are from a river.

Unless a recipe calls for a specific type of prawn or shrimp, they can be used interchangeably. The most important aspect for most recipes is freshness: choose whatever is best in the market that day. Asian seafood markets usually offer a good selection of sizes at reasonable prices.

Dried shrimp roe is sold in small jars in Chinese grocery shops. The roe are tiny, but intensely flavoured. The shrimp roe is an optional iingredient, but it adds a lot of umami to the dish, and one jar will last a long time in the fridge.

Shrimp oil is easy to make. Just collect shrimp heads and shells in a bag and store them in your freezer. When you have a sufficient amount - at least 90 grams (3 oz) - put them in a pan, add cooking oil to cover them, then cook at a low simmer for about 30 minutes. The oil will be a deep orangy-pink. Strain the oil and discard the solids, then pour the oil into a clean jar or bottle. If you don't have any shrimp oil, use plain oil.

Put the glass noodles in a bowl, cover with warm water and leave to soak while preparing the other ingredients. Drain then cut the noodles into shorter lengths. 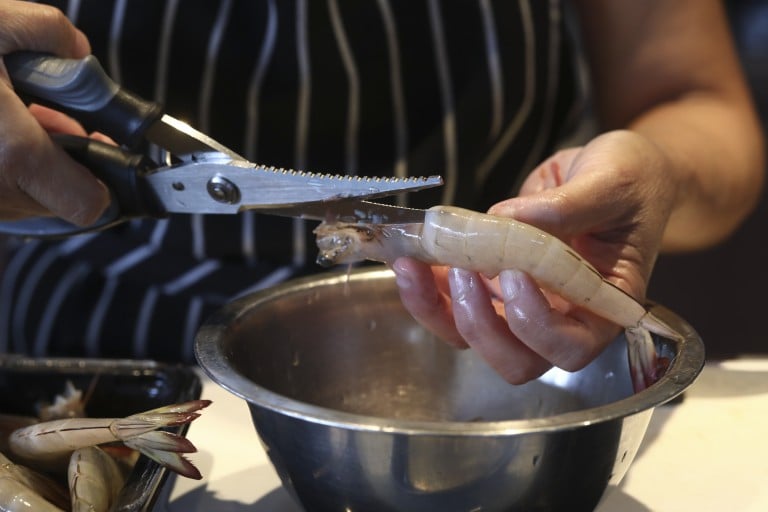 Use kitchen shears to cut off the legs, claws and antennae from the shrimp. Trim off part of the head of the shrimp, cutting right behind the eyes. If the ridge on the top of the head is sharp and ragged, trim it so it’s smooth.

Use the kitchen shears to cut the back shell of the shrimp, starting just below the head and cutting towards the tail. Pull out and discard the black vein.

Lay each shrimp cut-side up on a chopping board. Use a sharp knife to slice across the “neck”, cutting deeply but not all the way through; the head should remain attached. Make a deep cut along the length of the back of the shrimp/prawn, again, not cutting all the way through so it remains intact along the belly. The cut should be deep enough that the shrimp/prawn can be opened almost flat.

Lay the drained noodles on a heatproof serving dish that fits into your steamer.

Arrange the shrimp over the noodles. Drizzle a little fish sauce over the flesh of each shrimp, then sprinkle lightly with shrimp roe. Scatter the garlic and chilli pieces on top.

Pour water into a wok to a depth of about 3cm (1¼ in). Put a low-footed rack in the wok, then place over a high flame. When the water boils, place the dish on the rack and cover with the wok lid. Steam over a high flame for five to eight minutes, or until the shrimp are cooked. 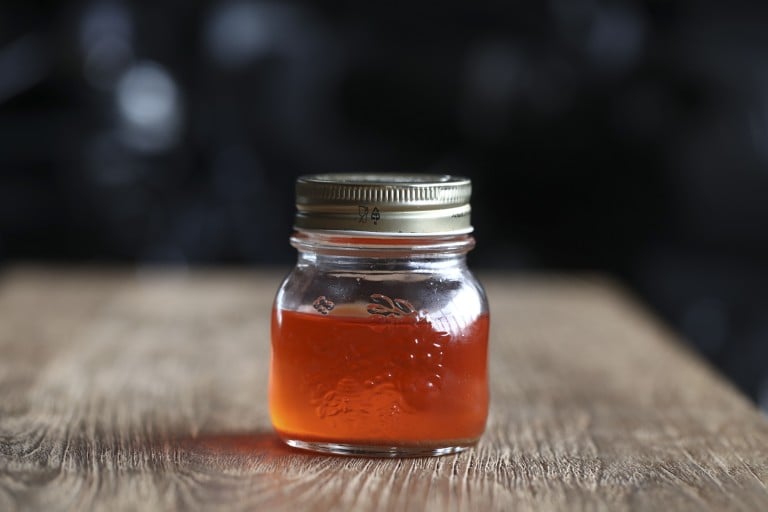 While the shrimp are steaming, heat the shrimp oil or cooking oil until very hot.

Remove the dish from the steamer. Scatter with the spring onion and drizzle the hot oil over the shrimp. 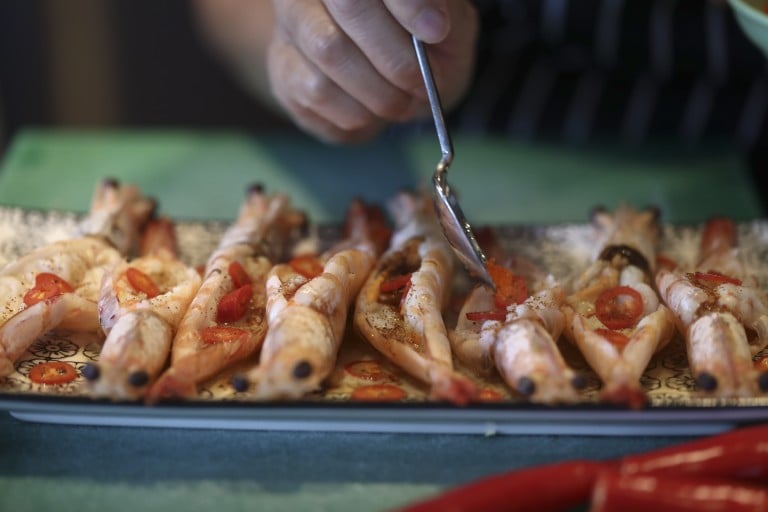 Spoon the tobiko caviar over the shrimp, then serve.

10/10
Chinese Dinner Shellfish Easy
Liking this recipe?
Now you can save the recipe you into your own collection.
Find us on facebook
Join our community and get the latest recipes from all over Asia for you to make at home.