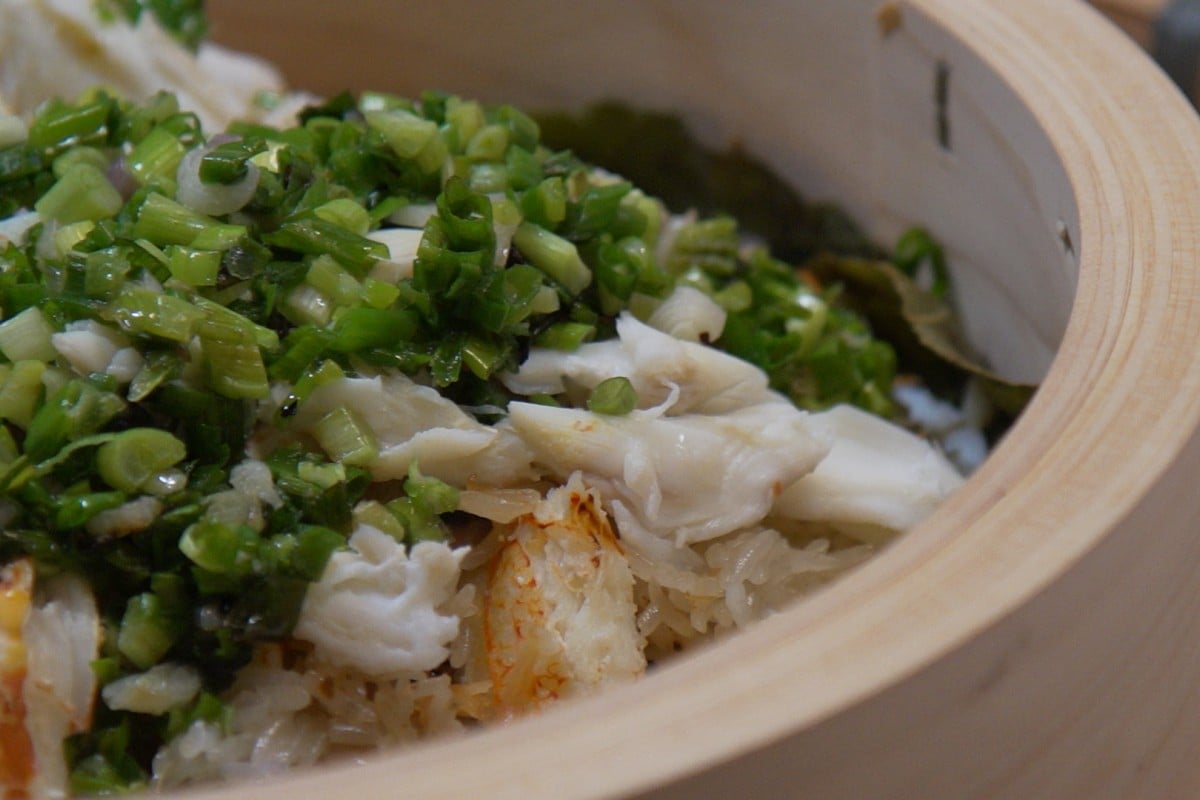 Veteran restaurateur Danny Yip had successful establishments in Canberra, Australia, before he moved back to Hong Kong to open The Chairman in 2009. The Chinese restaurant was ingredients-focused even before that concept became popular; from the start, Yip was using local ingredients as much as possible, and even produces many of the sauces and condiments they serve. The Chairman is on the Asia’s 50 Best Restaurants and the World’s 50 Best Restaurants lists.

The most popular dish at The Chairman is the steamed flowery crab with aged Shaoxing wine and rice noodles, but the restaurant’s regular customers also love the steamed sticky rice with crabmeat and dried sakura shrimp.

In Chinese tradition, it’s served at the end of the meal - rice is meant to fill any holes in your stomach, in case you’re still hungry after all the courses that came before. At home, though, this would be a good centrepiece to a simple meal, served with stir-fried green vegetables and perhaps a soy sauce chicken (homemade or purchased), or roast meats (char siu [barbecued pork] or siu yuk [crisp-skinned roast pork]) from the siu mei (roast meat) shop.

Sticky rice is also known as glutinous rice; it’s a short-grained variety, but is not the same as the type served at daily meals in Japan and Korea. Sakura shrimp belong to the Sergestid family. They are tiny and pink, and are named poetically after sakura (cherry blossoms). Dried scallops (conpoy) are sold in some Chinese supermarkets, but you’ll find the better-quality ones at shops specialising in dried seafood. Don’t buy the very small ones, which are tough; buy scallops that are about 2cm (⅞in) in diameter. Because you’re going to shred them, it’s fine to buy dried scallops that are slightly broken (not perfect discs), which are a little cheaper.

Flowery crab is also known as flower crab; it gets its name because of the pattern on the shell. It's important to kill the crab right before cooking it. Once the crab is not alive, the meat starts to deteriorate.

You can make an easy clam stock by steaming fresh, shell-on clams until they open, then using the liquid that collects in the bowl. The clam meat can be used for other dishes. You can substitute homemade unsalted chicken broth, if you like.

Put the sticky rice in a bowl, add enough water to cover then stir with your hand. Pour off most of the water. Repeat this process three or four times, or until the water is almost clear. Add more water to the bowl to cover the rice by about 2.5cm (1in), then leave to soak for two hours. Strain the rice through a colander.

While the rice is soaking, prepare the dried scallops, mushrooms, lotus leaf and crab. Place the conpoy in a rice bowl and add 60ml (¼  cup) cool water. Put the bowl in a tiered steamer (or on a low-footed rack in a wok) over simmering water and cover with the lid. Steam for two hours, occasionally checking the water to make sure it doesn’t run dry. Shred the scallops when they are just cool enough to handle; if you let them get cold, they will harden.

Rinse the dried mushrooms then put them in a bowl, cover with cool water and soak for about two hours, or until fully hydrated. Squeeze the mushrooms to remove the excess liquid, then trim off and discard the stems. Cut the caps into small dice.

Rinse the lotus leaf, then scrub it with a clean sponge or kitchen brush. Put it in a large bowl and soak until pliable.

Scrub the crab under running water, then kill it by poking a sharp metal skewer between the eyes into the brain. Bring a pot of water to a boil. Place the crab in the pot and poach gently for 20 minutes, adjusting the flame so the water is just under the simmer. Remove the crab from the water and drain it in a colander. (If you prefer, you can steam the crab over simmering water for 20 minutes.) When cool enough to handle, pull off the back shell and place it cavity side-up on a dish. Remove and discard the feathery gills from the crab body. Remove the crab meat from the shells and measure out 180g (6⅜oz). Shred the crab meat, then divide it into two portions. (The excess crab meat and the roe and tomalley [crab guts] should be used for another dish, or eaten on their own.)

Dice the chilled pork fat. Put the clam (or chicken) stock in a bowl and mix in the salt, sugar and soy sauce.

Heat a wok over a medium flame. Add the pork fat and stir-fry for one minute, then add the drained sticky rice, half the crab, the shredded scallops, diced mushrooms and sakura shrimp. Stir well, then drizzle in the clam (or chicken) stock and soy sauce mixture. Stir-fry constantly for two minutes over a medium flame then turn off the heat.

Line a 20cm (8in) bamboo steamer basket with the lotus leaf. Scoop the rice and other ingredients into the basket and cover with the bamboo lid. Place the basket in the tiered steamer (or wok with a low-footed rack), cover with the lid and steam over simmering water for 20 minutes. Occasionally check the steamer to make sure the water doesn’t dry out.

Mince the spring onions and mix with the remaining crab meat.

When the rice is cooked, lift the lid and scatter the spring onion and crab on top. Serve immediately.

10/10
Chinese Lunch Rice Shellfish Medium
Pairs with
Easy Chinese soy sauce chicken
Easy
10 mins
Liking this recipe?
Now you can save the recipe you into your own collection.
Find us on facebook
Join our community and get the latest recipes from all over Asia for you to make at home.