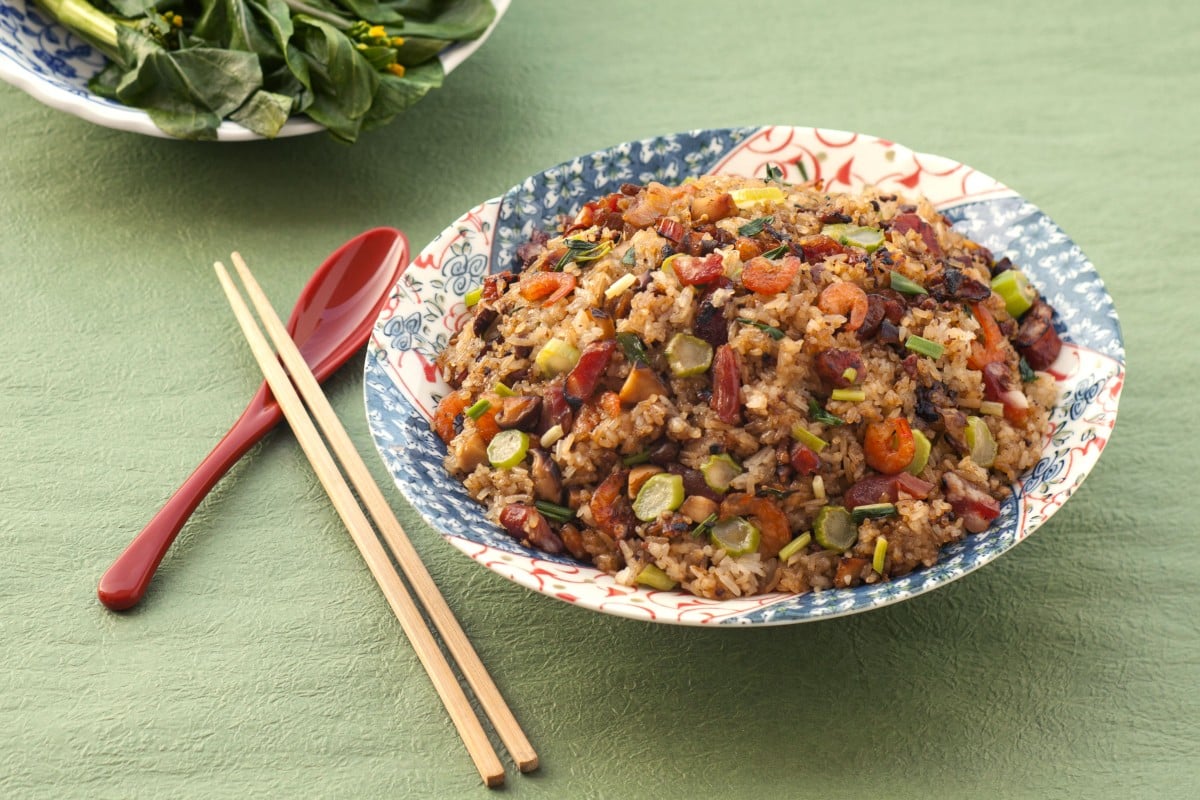 Wind-dried meats (known collectively as lap mei) are in season in the cooler months. They're also known as "wax meats" because they have a waxy appearance although no wax is used in their production. You can buy various types in supermarkets but it's worth seeking out shops that make their own. For a quick meal, you can skip the pan-frying step - serve the rice after mixing in the stir-fried meats, shrimp and mushroom. But it's even better if the mixture is pan-fried, to give it a brown, crunchy crust. This dish uses lap cheung (wind-dried sausage), yuen cheung (liver sausage; it's even better if it's made with goose liver) and lap ngap (salted duck).

This is not a dish for dieters or fat-phobes. There's a lot of fat, which is one reason it's so delicious and rib-sticking. It's even better if you use lard or rendered duck or chicken fat, rather than oil. If you need to limit calories, eat a smaller amount of the fried rice, rather than scrimp on the fat.

For any fried rice dish, you need to let the cooked rice cool for several hours; if you try to stir-fry it when it's fresh out of the cooker, it will be very sticky and dense.

Put the glutinous rice and long-grain rice in a bowl and rinse it several times, until the water is almost clear. Drain off most of the water, then weigh the rice. Add more water so the total weight of rice and water is 1.1kg (39oz). Leave to soak at room temperature for at least three hours, then put it in a rice cooker. Put the salted duck leg on top and steam until the rice is cooked.

While the rice is soaking, prepare the other ingredients. Rinse the mushrooms and shrimp, then put them in a bowl and add just enough cool water to cover. Leave to soak until the mushrooms are fully hydrated, about three hours. Drain the ingredients, reserving the soaking liquid.

Squeeze the excess moisture out of the mushrooms. Trim off and discard the mushroom stems, then cut the caps into 5mm (¼in) dice.

Quarter the lap cheung and yuen cheung lengthwise, then slice about 5mm (¼in) thick. Cut the spring onions into 5mm (¼in) lengths. Slice the gai lan stalks into thin rounds.

Mix the kecap manis with 30ml (2tbsp) of the soaking liquid from the mushrooms and shrimp, add about a quarter of a teaspoon of salt and stir to dissolve.

After the rice and duck leg are steamed, take the duck leg out of the rice cooker, then close the lid so the rice stays hot.

Take the bones out of the duck leg, then cut the meat into small cubes.

Heat a wok over a high flame and when it's hot, add about 10 grams (1/3 oz) of the lard, rendered duck or chicken fat, or oil. When the fat is hot, add the lap cheung, yuen cheung and duck meat. Stir-fry over a high flame until the meat is lightly browned and the fat starts to render out. Scrape the meat into a bowl, leaving behind as much fat as possible.

There should be about 30ml (2tbsp) of fat in the wok; if necessary, add more of the fat of choice. When the fat is hot, add the shrimp, mushrooms and kale to the wok and stir-fry for about a minute. Add the spring onions and stir-fry until wilted, then put these ingredients into the bowl containing the meat.

Add the stir-fried ingredients to the rice in the cooker and pour in the kecap manis/water. Stir until the ingredients are distributed through the rice. Taste for seasonings, and adjust if necessary. The rice can be served now, or cooled and pan-fried later.

To make crusty rice (as with bo jai fan - clay pot rice), add about 30 grams (1 oz) of the fat of choice in a wok placed over a high flame. Add the rice, and spread the ingredients in a thin layer in the contours of the wok, pressing gently and leave undisturbed until you hear the rice start to crackle and smell toasted. Stir everything together, then repeat. (I do this several times.) Add more fat to the wok whenever the rice sticks. When it's ready, scoop the rice into bowls and serve immediately with the stir-fried kale leaves and thin stems.

11/11
Susan Jung Chinese Side dish Rice Dairy-Free No-Sugar Peanut-Free Medium
Diet definitions
Liking this recipe?
Now you can save the recipe you into your own collection.
Find us on facebook
Join our community and get the latest recipes from all over Asia for you to make at home.