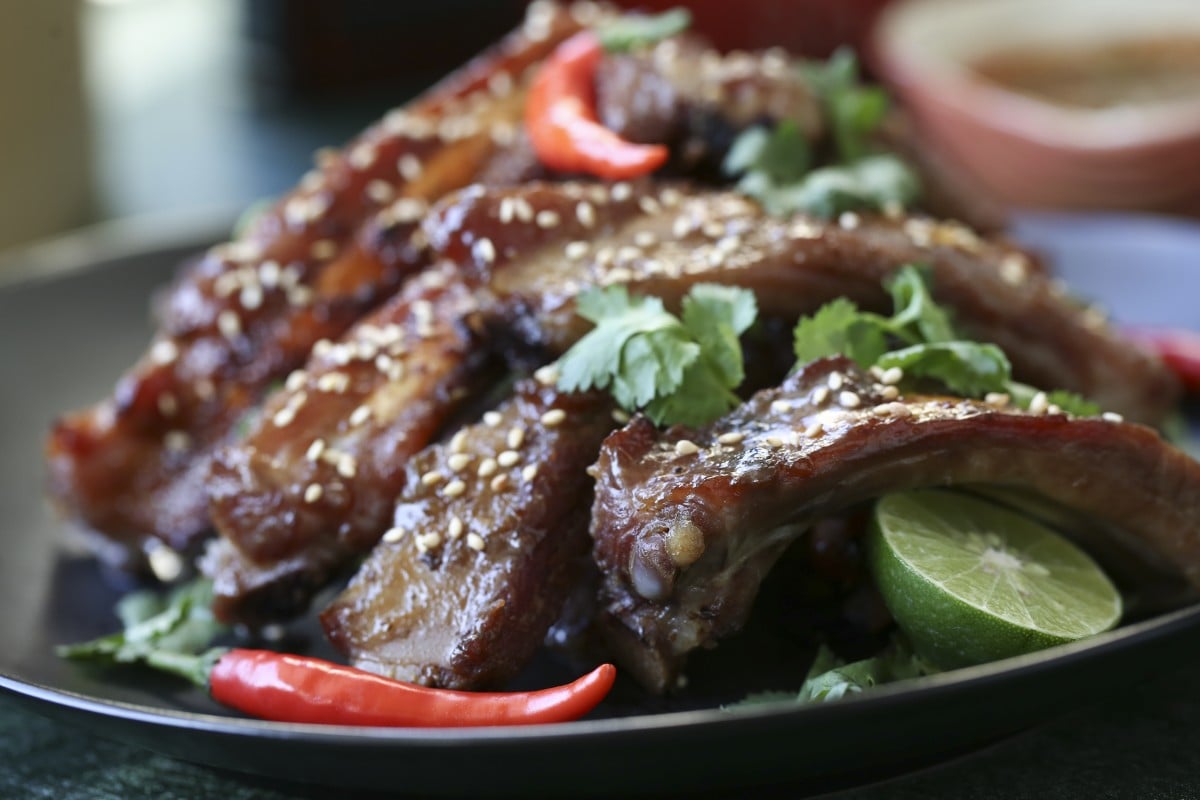 Cooking pork spare ribs low and slow in the oven is an easy way of reproducing some of the conditions that pit masters have when they're making barbecued ribs, brisket and even whole animals. Of course, if you actually have a wood-burning outdoor barbecue that's capable of long, slow cooking (and are willing to watch it closely for several hours, to feed the fire and maintain the temperature), by all means use that - it will taste far better than using the oven, because the meat will have a smoky flavour.

But using an oven is far easier because the heat is steady. Once the ribs are in the oven, you only need to check them after about three hours, to see how they're coming along. I like pork ribs to be tender, but not so soft that you can pull them apart. At 110°C (230°F), this takes about four hours for rib racks that weigh 500g (18oz). If you like the meat to be softer, cook them longer.

If you have the choice between baby back ribs and spare ribs, choose the latter, because the meat is moister. Ribs are usually sold with the tough membrane on the underside removed; if not, insert a knife underneath the membrane and, grasping it firmly, peel it off - it will usually come off in one piece.

Make the marinade. Roughly chop the garlic cloves and coriander roots and stems, then put them in a mortar with the palm sugar and pound to a rough paste. Put the paste in a bowl and mix in the white pepper, the soy, fish and oyster sauces and the sesame oil. Put the rib racks in a bowl and add the mari­nade. Mix well so the marinade coats the meat, then refrigerate for two to four hours. Occasionally mix the ingredients so the meat is marinated evenly.

Take the rib racks out of the fridge and leave them at room temperature for about an hour. Preheat the oven to 110°C (230°F).

Remove the rib racks from the marinade (reserve the marinade for later). Lay each rack on a separate sheet of aluminium foil. Bring up the four sides of the foil to loosely but securely wrap the ribs. Place the ribs side-by-side on a baking tray and cook at 110°C/230°F for about four hours, or until tender enough to be esaily pierced between the bones with a sharp knife.

When the ribs are tender, take them out of the oven and remove the foil. Place the ribs on the baking tray, bony side-up. Turn the grill element of the oven to high.

Cut the racks between the bones into individual ribs and pile them on a serving platter. Sprinkle sesame seeds over the ribs then garnish with coriander sprigs, lime wedges and chillies.

6/6
Susan Jung Thai Main Course Pork Low-Carb Dairy-Free Keto Peanut-Free Medium
Diet definitions
Liking this recipe?
Now you can save the recipe you into your own collection.
Find us on facebook
Join our community and get the latest recipes from all over Asia for you to make at home.