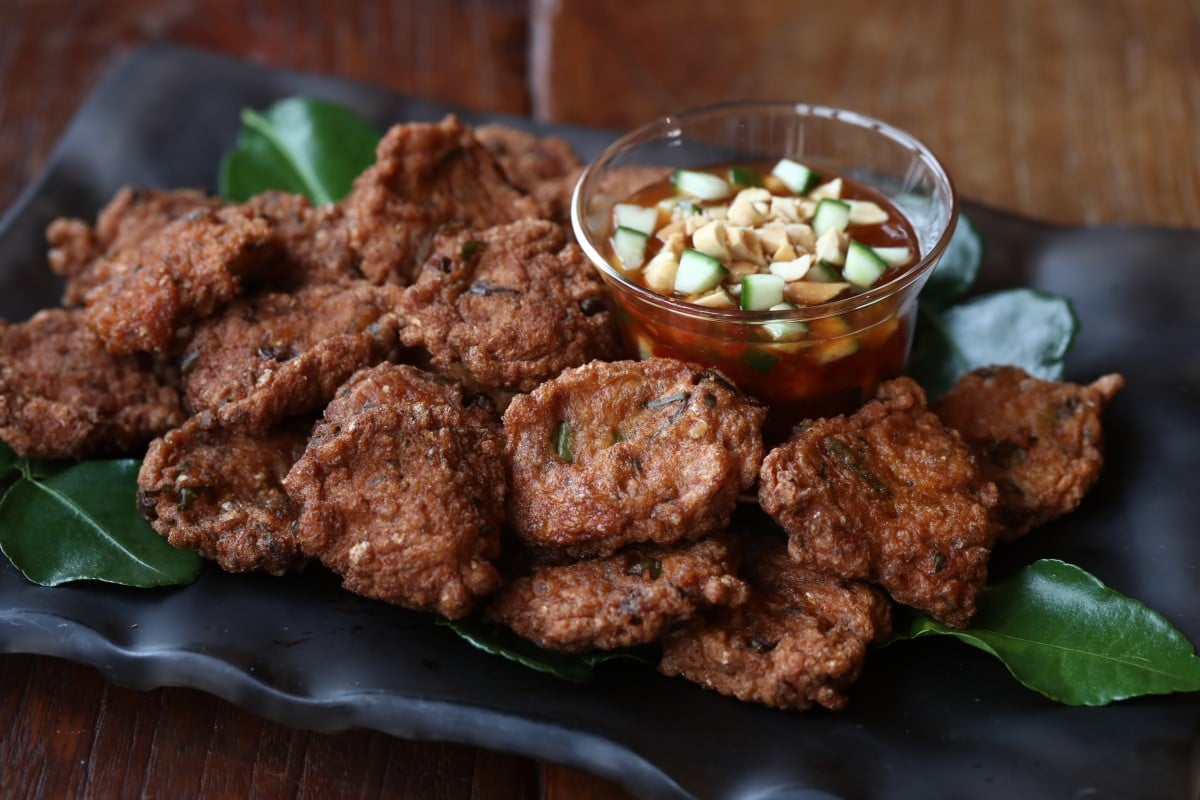 Tod mun pla, or fried fish cakes, is a popular dish from Thailand. The best I’ve eaten were in Bangkok, where a street food vendor was frying them as fast as she could for a line of eager customers. Thai fish cakes are different from the tender, lightly seasoned version you get outside Asia.

In many Asian cuisines a “bouncy” tex­ture is prized – meatballs, seafood balls and fish cakes have a resilience that is almost, but not quite, chewy. This texture is achieved by vigorous mixing of the fish (or meat or seafood) paste, either beating it in a machine, or by repeatedly picking up handfuls of the paste and throwing it back into the bowl.

The base of these fish cakes is fresh (uncooked) ground fish paste, which you can find at Asian seafood markets. Seafood vendors take inexpensive fish, fish scraps and whatever fresh fish is left from the day before and chop and pulverise it to make the paste. You can make it yourself, but it is much more economical (and easier) to buy it.

Tass, the excellent home cook I learned this recipe from, recommends mixing two types of fish paste – one seasoned (primarily with salt) and the other plain. She says the seasoned paste on its own is too salty for this recipe (it is often used to make fish balls, or as a stuffing for fried vegetables or bean curd), while the plain one is too bland.

If the market only has plain fish paste, mix in salt to taste, along with other seasonings such as ground white pepper and finely minced chun pei (dried tangerine peel). If you can buy only seasoned fish paste, grind or very finely mince raw fish fillets and mix them in to tone down the saltiness.

Makrut lime leaves (also called kaffir lime leaves) come in pairs; you will need four to six pairs for this dish, depending on their size. 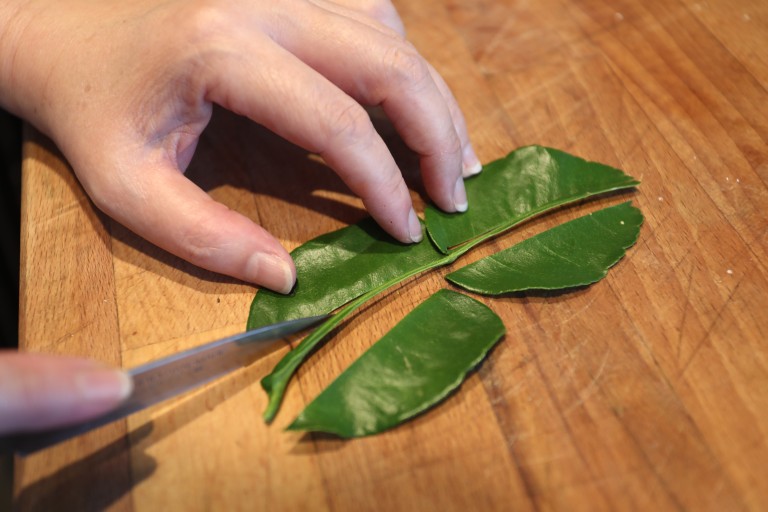 Remove and discard the centre veins from the lime leaves, then mince the leaves as finely as possible. Put the unsalted fish paste in a large mortar (or a large bowl), add the minced lime leaves and pound with the pestle until fully incorporated (or stir vigorously, if using a mixing bowl).

Add the egg and curry paste and mix well, then thoroughly incorporate the sugar and corn starch. 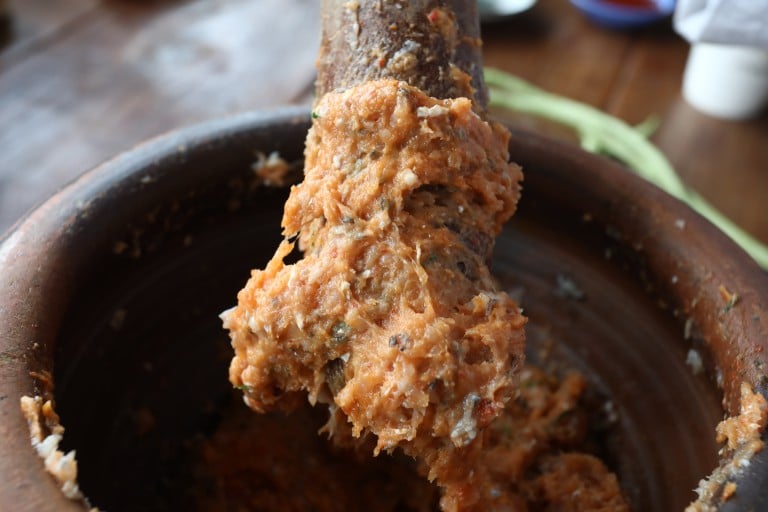 Take handfuls of the mixture and throw them back into the mortar or bowl, repeating the process at least 10 times, or until you see protein threads forming.

Heat a lightly oiled skillet and pan-fry a spoonful of the mixture until cooked, then taste it for seasoning. If necessary, add some salt. 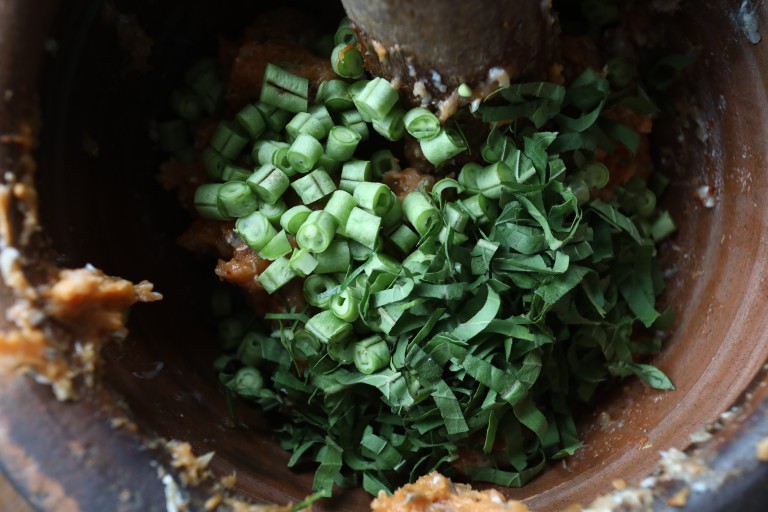 Cut the long beans into thin rounds, then stir them into the fish paste.

With lightly dampened hands, scoop up some of the fish-paste mixture. Flatten it in the palm of your hand to create a disc about 3cm-4cm (1¼ to 1½ in) in diameter, then press the centre to create an indentation.

Put the fish cakes into the hot oil and fry until they puff up and are fully cooked, turning them over once. Cook them in batches; do not crowd the wok. Remove the fish cakes from the oil and drain on paper towels.

Mix the ingredients for the sauce. Put the chilli sauce in a serving bowl and stir in some white vinegar to taste. Peel and dice the cucumber, then mix it in. Chop some peanuts and scatter over the sauce.

Just before it’s time to serve the meal, re-fry the fish cakes. Heat the oil to 175° C (345° F). Put some fish cakes into the oil (it’s OK to crowd them slightly) and fry for about 45 seconds, or until hot and puffed. Drain on paper towels.

Pile the fish cakes onto a dish and serve with the sauce in a bowl.

13/13
Thai Appetiser Fish Medium
Liking this recipe?
Now you can save the recipe you into your own collection.
Find us on facebook
Join our community and get the latest recipes from all over Asia for you to make at home.