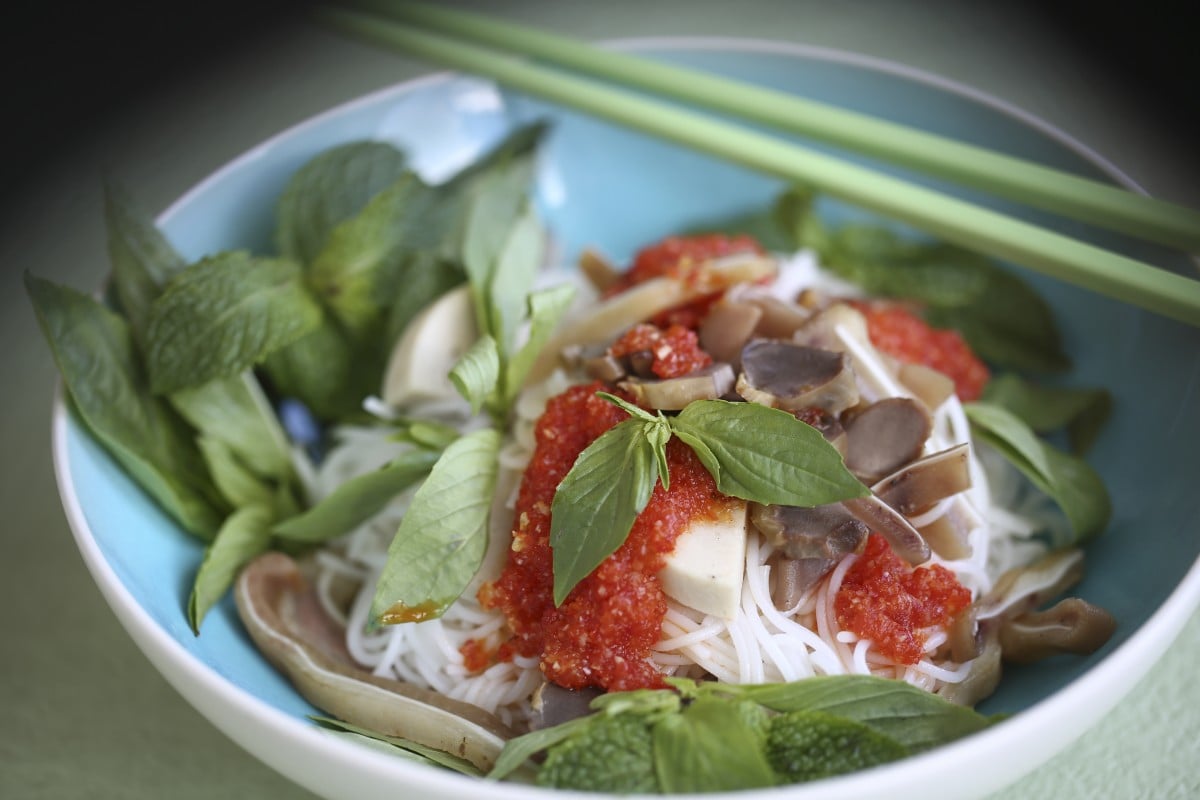 I tried this dish in Phan Thiet, on the coast of southeast Vietnam. My friends and I were wandering through the fish market by the harbour when we came across a vendor selling banh mi thit and another making a rice noodle dish that I was not familiar with. Even though I had eaten breakfast at the hotel, I was soon downing breakfasts number two and three.   The sandwich was good, of course, because the bread in Vietnam is excellent, but the noodles were fantastic: room-temperature rice vermicelli with sliced pig's ear, sliced pork liver, cha lua (cold pork sausage with a slightly rubbery texture), bean sprouts and a handful of fresh herbs. After the vendor piled everything into a bowl, I expected her to add some nuoc cham (dipping sauce made up of fish sauce, lime juice, vinegar and sugar) but instead, she ladled a generous amount of chilli-garlic sauce (tuong ot toi) over the ingredients. It was tongue-tinglingly spicy but balanced by sweet and sour flavours.   I made the chilli sauce at home but it took a few attempts to get the spice balance right. It works best if you use equal amounts of spicy red chillies - as many varieties as you can find, for a more complex flavour - and red banana chillies, to balance the heat. It's important to get the quantities right: weigh the chillies after removing the stems and seeds, and weigh the garlic after removing the skin. This sauce is now a staple in my fridge; it keeps for several weeks. If you live in an area with a large Vietnamese population, you might be able to find bottled tuong ot toi. Chu lua is available at Thai food shops.   To serve with the noodles, I substituted chicken giblets for the pig's liver, because the latter sometimes has a mealy texture. If you don't like innards and extremities, substitute boiled pork belly for the pig's ear and chicken giblets. 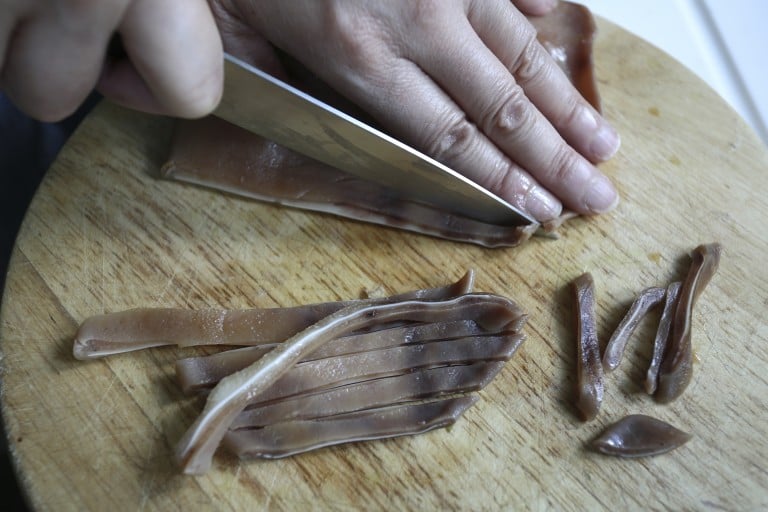 If using pork belly in place of the pig's ear and chicken giblets, place pork belly, garlic cloves and peppercorns in a pot, cover generously with water, bring to a boil and cook until tender, about 45 minutes. Remove from pot and allow to cool. 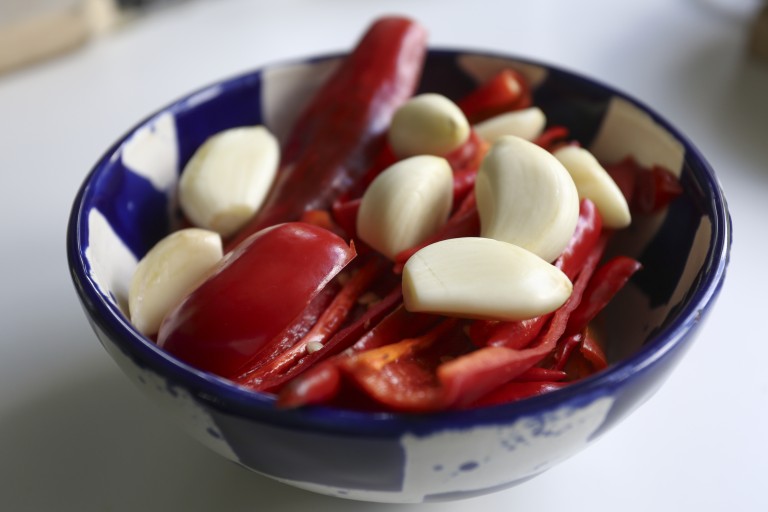 Make the chilli sauce (tuong ot toi) while the pig's ear or pork belly is cooking. Roughly chop the garlic and chillies and put them in the bowl of a food processer. Add the sugar and salt and process until the ingredients are finely chopped. Scrape the mixture into a small pan and add the white vinegar and about 60ml ( ¼ cup) of water. Bring to the boil, then lower the heat and simmer, uncovered, until it reduces to a thin paste, stirring often. Cool to room temperature then refrigerate for at least an hour. At first, the chilli sauce will taste too spicy but as it rests, the flavours will mellow. If it’s overwhelmingly spicy after an hour, add a little more sugar and/or vinegar. 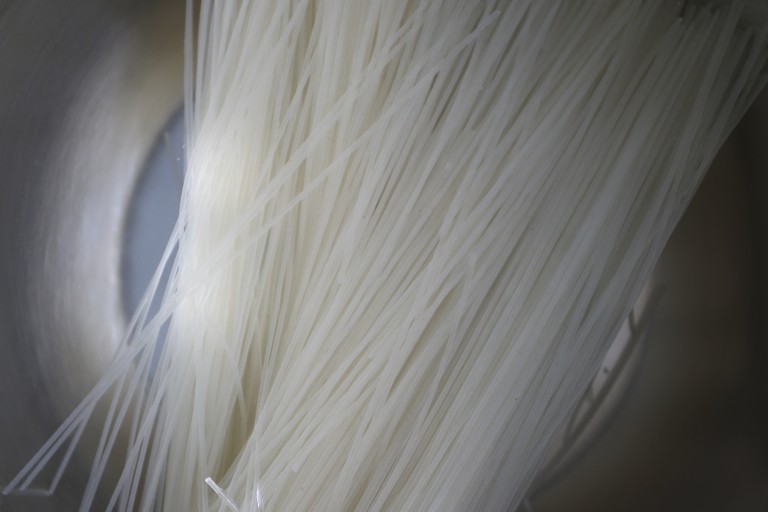 Put the rice noodles in a large bowl of water and leave to soak for about 15 minutes. Bring a pot of water to the boil, add the noodles and cook briefly, until just tender, then drain.

Divide the rice noodles between six to eight bowls and add some bean sprouts, mint and basil leaves and the culantro (torn into smaller pieces). Thinly slice the pig’s ear and chicken giblets (or pork belly) and divide them between the bowls. Quarter the cha lua (sausage) lengthwise, slice it about 3mm (⅛in) thick, then divide the pieces between the bowls. Add a dollop of the chilli sauce over the noodles, then put the rest into a bowl and let the diners add more to taste. Mix the ingredients well before eating.

4/4
Susan Jung Vietnamese Lunch Noodles Medium
Liking this recipe?
Now you can save the recipe you into your own collection.
Find us on facebook
Join our community and get the latest recipes from all over Asia for you to make at home.