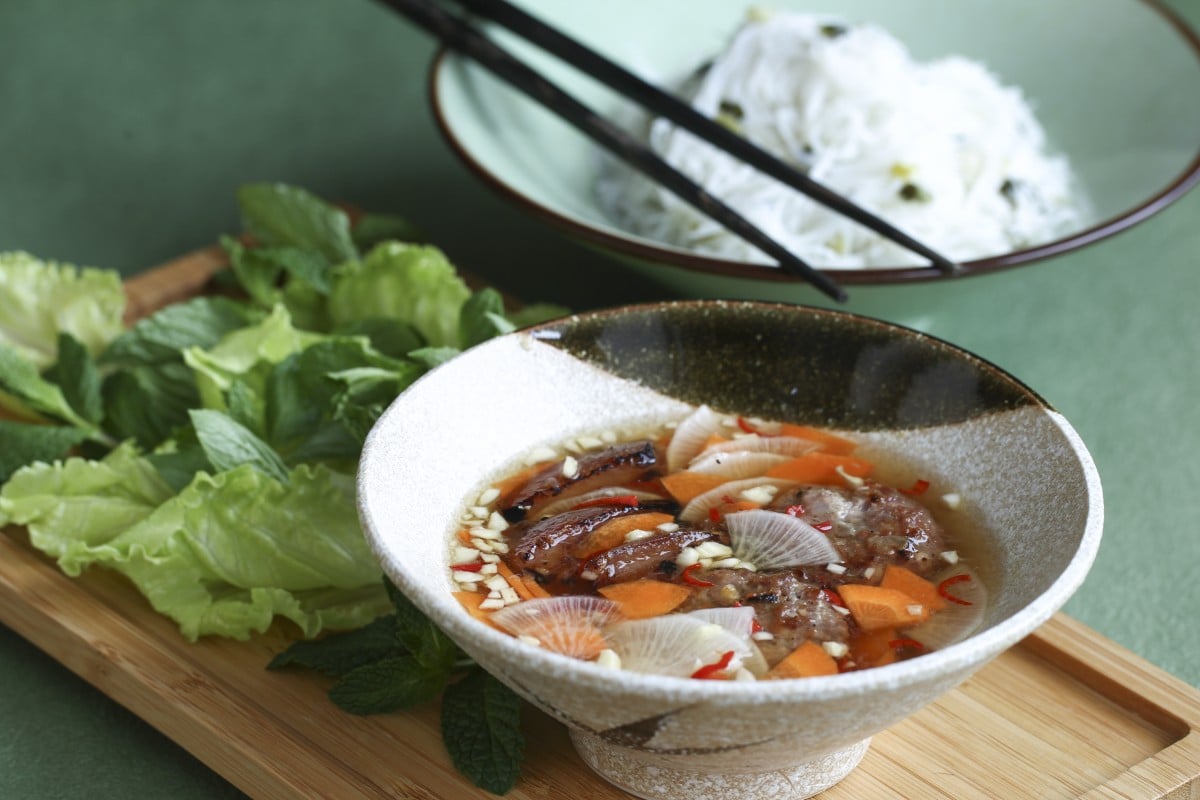 This Vietnamese dish is one of my favourite light meals - the combination of rice noodles, barbecued (or grilled) pork and lots of fresh vegetables and herbs leaves you feeling refreshed rather than heavy and lethargic. Most recipes for bun cha call for pork belly but I prefer pork neck (also called pork jowl). I also like to mince the meat myself, preferably in an electric grinder, but you can also use a food processor (although with this, you have to be careful you don't overprocess it int a mush) . If you don’t have either of those pieces of equipment, buy coarsely ground meat from the butcher.

In Vietnam, they tend to serve the rice noodles in a small bowl (or on a plate), the meatballs and grilled meat with the fish sauce in another bowl and the lettuce and herbs in a separate bowl or on a platter. Outside Vietnam, however, they usually pile everything in one large bowl. Serve it the way you like.

The marinade and dipping sauce are made at the same time. After adding some of the mixture to the meat, the remainder is diluted and served with the ingredients.

Make the marinade and dipping sauce. Mix the fish sauce with the lime juice and rice vinegar, then add the sugar and stir until it's dissolved.

Put half the pork neck into a bowl and add 80ml (¼  cup and 4tsp) of the marinade, two roughly chopped garlic cloves and two minced chillies. Mix thoroughly then refrigerate for about two hours.

Cut the remaining pork neck into small chunks and add 60ml (¼ cup) of the marinade, two sliced garlic cloves, two roughly chopped spring onions and some freshly ground pepper. Put the ingredients into a container and freeze until the meat is icy on the surface, but not frozen solid. Use a meat grinder fitted with the medium blade to coarsely grind the meat, or process briefly in a food processor until the pork is roughly chopped. Refrigerate for about two hours. (If using purchased minced meat, finely chop the garlic and spring onions, then mix them into the meat along with 60ml [¼ cup] of the marinade and some black pepper, then refrigerate.)

Bring a large pot of water to the boil then turn off the heat. Add the rice vermicelli and let it soak in the hot water until tender but not mushy, then drain. Add some of the spring onion oil and mix it in thoroughly, adding enough to lightly coat the noodles (this flavours them and prevents them from sticking together). Reserve some of the cooked spring onion for topping the noodles before serving.

Shape the minced meat mixture into small, flat patties about 3cm (1¼ in) in diameter and cook them on a lightly oiled grill or barbecue, letting them char slightly. Cook the pork neck on the grill or barbecue and, when the meat is done, cut it across the grain into slices 5mm(¼in) thick.

Taste the remaining fish sauce mixture and add sugar and more lime juice, as necessary. Finely mince four garlic cloves and three chillies and add them to the mixture. Mix in about 60ml ( ¼ cup) of cold water, to dilute the sauce slightly; if it's still too strong, add a little more water. Pour some of the sauce over the rice noodles - just enough to moisten them - and mix thoroughly. Divide the noodles into four to eight portions and top each one with some of the cooked spring onion and a little of the spring onion oil. Cut the carrot and green papaya into thin matchsticks, add them to the remaining dipping sauce, then pour the mixture into individual bowls.

Serve the noodles with the meatballs, sliced pork neck, dipping sauce and a platter of lettuce and fresh herbs. Let each diner add the ingredients to the noodles before eating.

8/8
Vietnamese Dinner Noodles Pork Dairy-Free Gluten-Free Peanut-Free Medium
Diet definitions
Liking this recipe?
Now you can save the recipe you into your own collection.
Find us on facebook
Join our community and get the latest recipes from all over Asia for you to make at home.