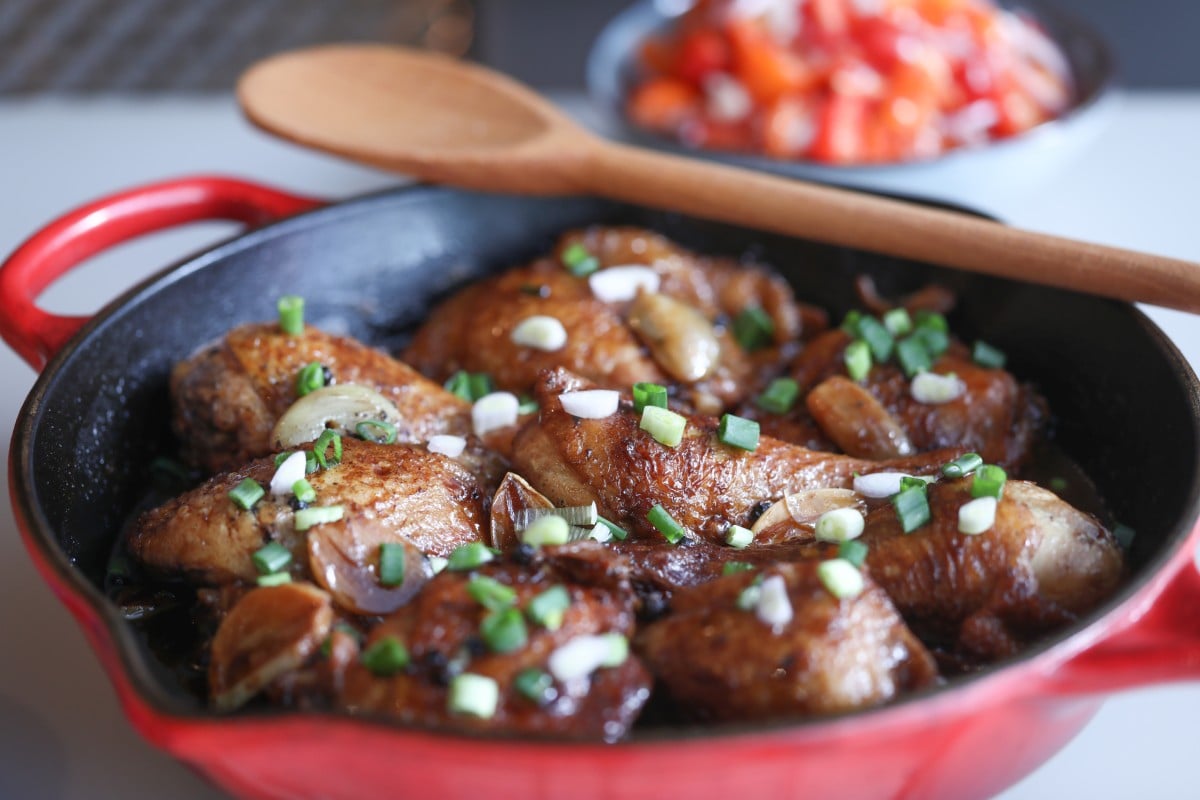 My first restaurant job in Hong Kong was as pastry chef at a restaurant where all the cooks – except myself and the head chef – were Filipino. They were a talented group who cooked American/European food for the restaurant, but when it came to staff meals, they prepared homestyle dishes from the Philippines.

Because I hadn’t yet visited the Philippines at that time I didn’t know much about the cuisine, but by eating with those cooks, I came to realise that the food is far more varied than most people think.

They were from various regions in the Philippines, and even I could taste the differences in the dishes they took turns preparing for the staff. We ate adobo several times a week and, while the protein was invariably chicken or pork, the seasonings and the amounts used differed according to the cook. The only ingredients the adobos had in common were vinegar, garlic and black peppercorns.

This version of chicken adobo uses coconut milk, which tones down the acidity of the vinegar. If you still find the sauce too sharp, add a tiny amount of sugar towards the end, just enough to balance the flavours. If you add sugar, you should still be able to taste the vinegar – the adobo should not be sweet.

There are different ways of preparing this dish. Some recipes will have you marinate the chicken, then brown the pieces before simmering them with the sauce. I usually avoid this because it makes a huge mess on the hob: no matter how much you try to dry the chicken pieces, there will be some moisture left, which makes the oil splatter in the skillet.

With this recipe, you marinate the chicken, then simmer everything together. Because the sauce is reduced enough to lightly coat the chicken pieces, you won’t notice that the meat hasn’t been browned first.

You can use a whole chicken for this, or four chicken legs (four each of drumsticks and thighs). Each option has an advantage. With a whole chicken, you can simmer the wing tips and carcass to make a broth for the sauce. But you will need to remove the white meat from the sauce and let the dark meat pieces cook for longer. If you use chicken legs, all the meat will take the same amount of time to cook, but there won’t be any bones for the broth.

If using a whole chicken, separate it into parts: two each of thighs, drumsticks, wings and boneless breasts, and one back. Set aside the wing tips, neck, carcass and head (if there is one). If using chicken legs, separate them into drumsticks and thighs.

Pour the coconut vinegar, soy sauces and coconut milk into a bowl.

Lightly crush the black peppercorns – I use a Japanese suribachi (grinding bowl) – then add them to the bowl. 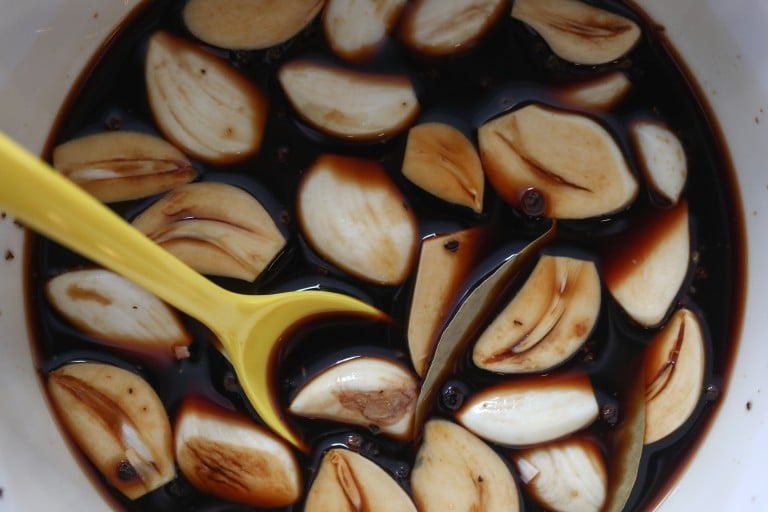 Use the side of a knife to lightly crush the garlic cloves. Cut the chilli(es) into thin rings, shaking out and discarding the seeds as you go. Add the garlic, chillies and bay leaves to the bowl.

Put the chicken pieces into the bowl and mix well. Refrigerate for at least three hours, mixing occasionally.

While the chicken is marinating, make the broth (if using a whole chicken). Put the wing tips, neck, carcass and head in a medium-sized pan. Add the celery, carrot and onion, then pour in enough water to cover the ingredients. Bring to a boil over a medium-high flame, then lower the heat, partially cover the pan with the lid, and cook at a low simmer for 45-90 minutes. Strain the ingredients through a colander placed over a bowl.

Pour the marinade into a low non-reactive skillet that’s large enough to hold the meat in one layer. Mix in 100ml (¼ cup and 2 tbsp and 2 tsp) of broth, then arrange the chicken pieces so they are skin-side up.

Place the skillet over a medium-high flame and bring to a boil. Cover the pan with the lid, then lower the flame so the liquid is at a medium simmer.

Cook for five minutes, then turn over the chicken. Cover the pan again and simmer for 10 minutes, then remove the wings and breast pieces.

Turn the remaining pieces of chicken over so the skin side is up. Cover the pan again and simmer for five to 10 minutes, or until the thighs are fully cooked.

Taste the sauce and if necessary stir in a little sugar (a teaspoon or less). Chop spring onions. 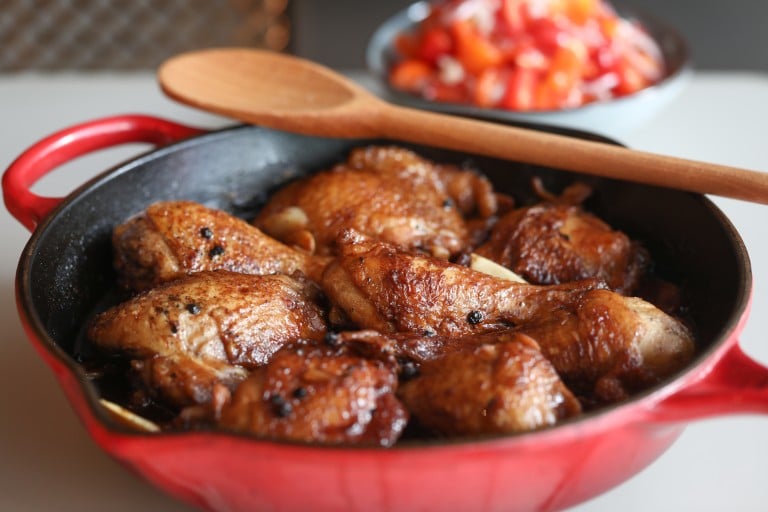 Place the breasts back in the pan and simmer uncovered for about five minutes, or until the sauce lightly coats the meat. Frequently spoon the sauce over the meat.

Sprinkle with spring onions and serve the adobo with steamed white rice or garlic rice.

13/13
Filipino Main Course Poultry Low-Carb Dairy-Free Keto Kosher No-Sugar Peanut-Free Easy
Diet definitions
Pairs with
Easy Filipino garlic rice
Easy
30 mins
Quick and easy Filipino pork belly adobo
Easy
30 mins
Liking this recipe?
Now you can save the recipe you into your own collection.
Find us on facebook
Join our community and get the latest recipes from all over Asia for you to make at home.