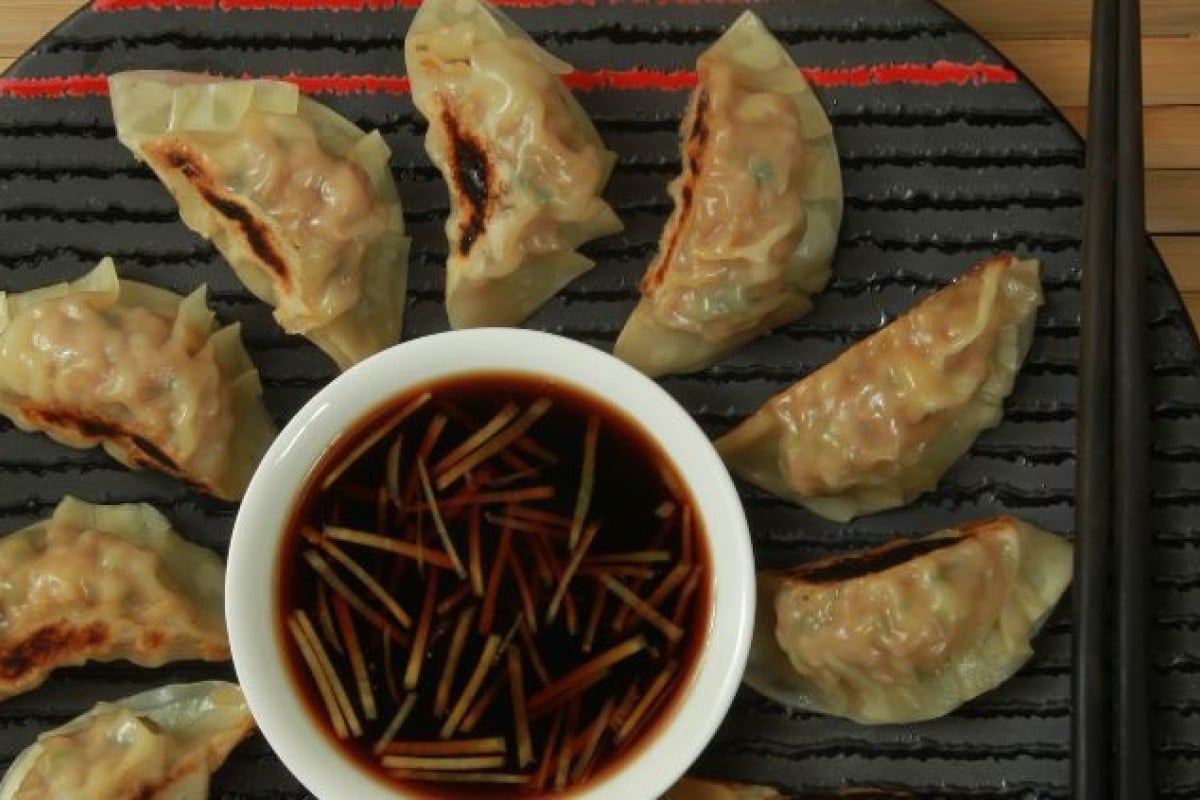 I tend to think of gyoza as a side dish to ramen, but I have eaten some versions of these pan-fried Japanese dumplings that are so good I'd be happy to make a meal out of them. Like ramen, gyoza has its origins in China, where the dumplings are known as jiaozi.

The technique for cooking them is a little unusual: the dumplings are placed in an oiled skillet and pan-fried to brown the bottom. Water is added to the pan, which is then covered with the lid, to trap the steam and cook the filling and dumpling wrapper. After the water evaporates, the dumplings are cooked, uncovered, to crisp up the bottoms, before being served browned side up.

This recipe makes a lot of dumplings, but they freeze well. Lay the filled (but uncooked) dumplings on a baking sheet, leaving enough space so they're not touching each other. Freeze them until solid then transfer the dumplings to a zip-lock bag, squeeze out the air and seal the bag before storing it in the freezer. Cook the dumplings from their frozen state; if you let them defrost before cooking, the wrappers will get soggy.

Halve the cabbage lengthwise and remove and discard the core at the base. Finely shred the cabbage then put it into a bowl, sprinkle with about a tablespoon of salt and mix well. Leave for 30 minutes, mixing occasionally. Drain the cabbage in a colander then rinse it thoroughly with cold water until the vegetable no longer tastes salty. Use your hands to squeeze out as much water as possible from the cabbage before putting it into a mixing bowl.

Mince the spring onions. Grate the ginger, using a Japanese ceramic grater, if possible, until you have 10g (⅓ oz) of ginger puree.

Drizzle the cold chicken stock (or water) into the bowl then stir vigorously with your hand. Stir in one direction until you see thin white strands of meat protein forming. Add the meat mixture to the cabbage and combine thoroughly.

Heat a lightly oiled skillet over a medium flame and pan-fry some of the filling until cooked. Cool slightly, then taste. If necessary, adjust the seasonings of the rest of the mixture. Chill the mixture for an hour.

Put about one-third of the dumpling wrappers on a cutting board, wrapping the rest so they don't dry out. Fill a small bowl with cool water and place it on the cutting board. Put one wrapper in the palm of your left hand (if you're right handed). Place a heaped spoonful of the filling in the centre of the wrapper. Bring the two sides of the wrapper over the filling and pinch the top firmly at the centre. Tightly seal in the filling, taking care not to trap any air in the dumpling, and pleat the wrapper along one side to create the gyoza's distinctive crescent shape. Place each dumpling sealed side up on a baking tray, pressing gently so the bottom of each one is flat.

Place a skillet (non-stick or well-seasoned cast iron) over a medium-high flame and coat it with oil. Arrange the gyoza in the hot skillet in one layer (you'll need to cook them in batches). Pan-fry the dumplings until the bottoms are browned.

Drizzle about 45ml (3tbsp) of water into the skillet and immediately cover with the lid. Turn the heat to medium and simmer for a few minutes, or until the filling is cooked. If necessary, drizzle in a little more water to create more steam.

Remove the lid, turn the flame to medium-high and cook to evaporate any remaining water and to brown and crisp up the bottoms of the gyoza.

Use a metal spatula to remove the gyoza from the skillet and place them bottom-up on a serving plate.

Serve the gyoza immediately and let your guests mix the ingredients to create their own dipping sauce.

12/12
Japanese Dinner Pork Vegetables High-Fiber Low-Fat Dairy-Free Peanut-Free Easy
Diet definitions
Pairs with
Satay soup with poached beef and udon noodles
Medium
1 hr 30 mins
Quick and easy Chinese fish ball noodle soup
Easy
30 mins
Easy 20-minute Korean vegetarian noodle soup
Easy
20 mins
Liking this recipe?
Now you can save the recipe you into your own collection.
Find us on facebook
Join our community and get the latest recipes from all over Asia for you to make at home.