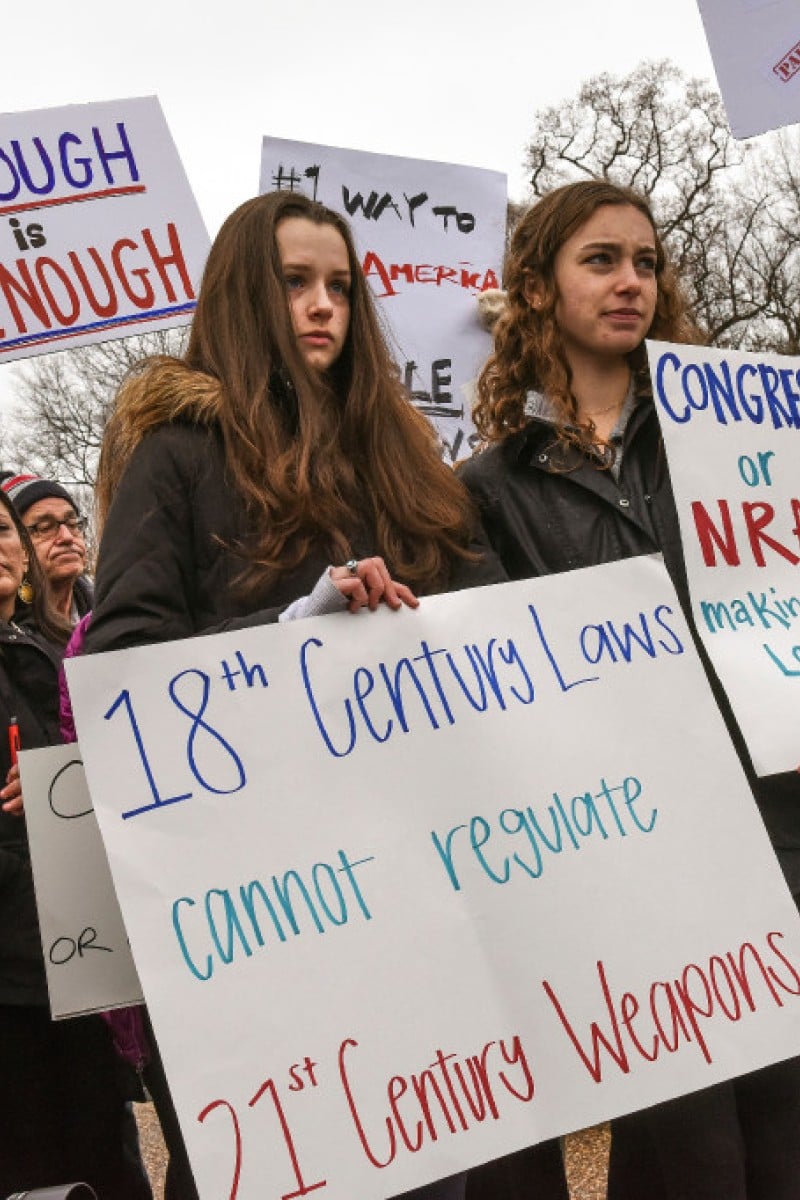 They never should have had to speak up and stand up to politicians - but they are. They are the students who have had enough of living as potential victims of gun violence Students across America are calling out for tighter gun controls.

They survived the Parkland school massacre and now a group of Florida teens - driven, empowered and united - are leading a #NeverAgain activist movement that hopes to pressure US lawmakers into tightening gun laws.

After 17 people were shot dead at Marjory Stoneman Douglas High School last Wednesday, students from the community near Miami were quick to demand action to stop mass shootings in American schools.

Having grown up in a world where children are drilled to prepare for the possibility a gunman could attack at any time, a group of eloquent teenagers have seized national attention with a call for a clampdown on the ready availability of powerful automatic firearms.

"To every politician taking donations from the NRA, shame on you!" said Emma Gonzalez in her speech that's since gone viral.
Photo: AFP

Their leaders include Cameron Kasky, creator of the #NeverAgain hashtag; Emma Gonzalez, who gave a fiery speech hitting out at politicians who receive money from the National Rifle Assocation; David Hogg, who filmed interviews with schoolmates during the shooting, and their classmate Chris Grady.

What sets these teens apart from the victims of previous shootings, said Frank McAndrew, a psychology professor at Knox University in Illinois, is that they “are young enough to be perceived as innocent victims but old enough to speak for themselves.”

They are “voicing shock, rage, sadness, and an entire range of innocent and raw emotions unsullied by political goals,” he told AFP.

All between the ages of 16 and 18, these youths come from affluent families, and experts say they will not be easily intimidated by adult politicians or the powerful National Rifle Association gun lobby.

After taking their demands to state legislators in Florida, the so-called “Parkland kids” plan to march on Washington on March 24 -- in a “March for Our Lives” that has received two million dollars in pledges of support from the likes of George and Amal Clooney and Oprah Winfrey.

Across the country sister movements are emerging to support the Parkland students, such as Student Walkout Against Gun Violence, which is organising protests under the Twitter handle @studentswalkout.

“Everyone wants to take action and make change in this country,” said the account creator, a 19 year old California college student who asked to remain anonymous, arguing that the story is not about her.

“If you don’t want to take action you haven’t watched the videos,” she said, referring to the images shared by the students while gunman Nikolas Cruz, 19, was on the shooting rampage at Stoneman.

Last year 58 people were shot dead at an open air concert in Las Vegas. In 2016, 49 people were slaughtered at a bar in Orlando, Florida. In 2012, 20 elementary school children and six adults were shot dead at the Sandy Hook school in Connecticut. In 2007, 32 college students were killed at a Virginia university.

In all of those cases, urgent calls for tougher gun control proved fruitless, but experts believe the teens now have a chance at making a real political impact.

Dana Fisher, a University of Maryland expert on US social protests, notes that the student movement comes at a time of heightened political activism following Donald Trump’s election, which reignited a culture of political protest starting with the historic Women’s March the day after his inauguration.

“Everybody in this country is way more politically involved than they’ve ever been before,” she said. “As a result, people are paying attention to politics like they haven’t before, including children.”

A second key factor: the tech-savvy millennials from Stoneman, many of whom are preparing for college, are unlike the children from Sandy Hook, who were too young to speak for themselves. Nor are they unrelated victims like in the Orlando and Las Vegas shootings.

“They were all students at the same high school and so many of them know each other personally,” said McAndrew, an expert on mass shootings.

Their familiarity “and the ease with which social media is integrated in their lives also gives them an edge when it comes to organising and communicating with each other, as well as with the world at large,” he said.

Furthermore, the Parkland kids “are affluent and therefore empowerment is real,” said J. Reid Meloy at the University of California at San Diego.

“They are energised by their suffering and grief and channeling the emotion,” he said.

“They are not intimidated by the older white males in politics and the NRA. They are tired of the passivity of being a potential victim,” said Meloy, a former consultant to the FBI on mass shootings.