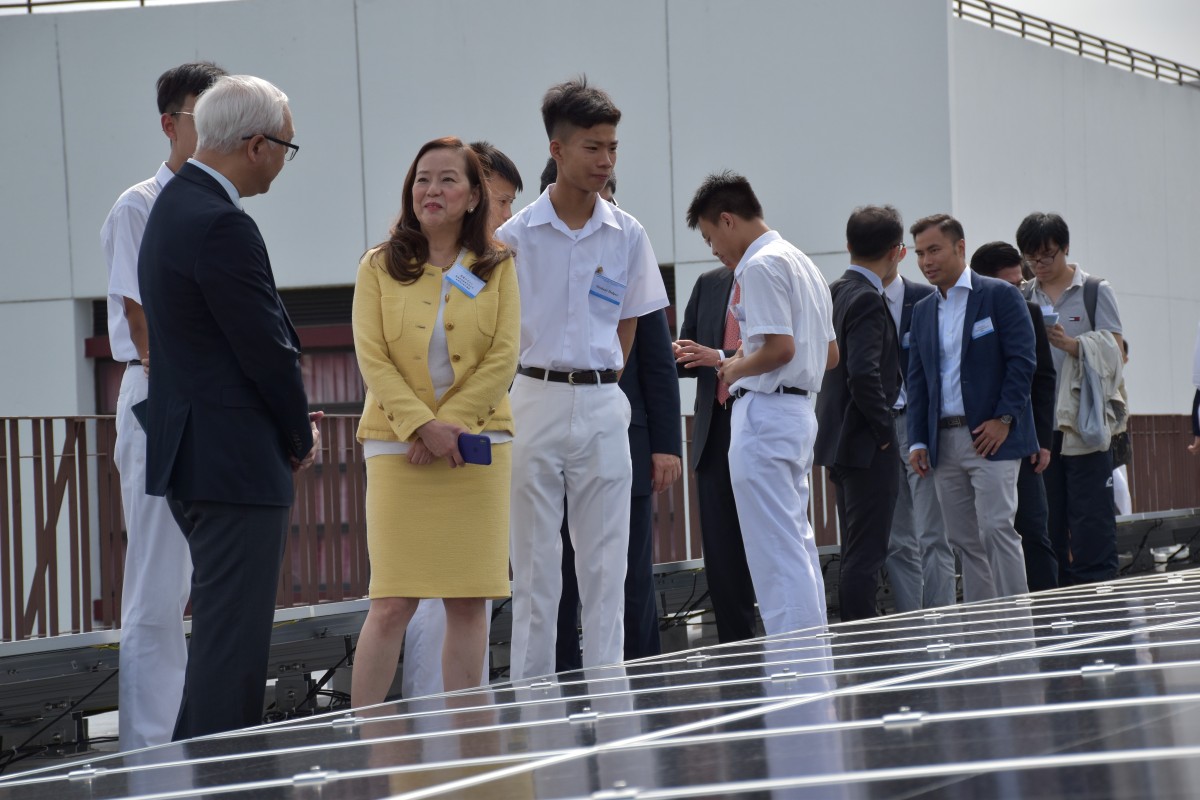 Student helpers demonstrated their STEM knowledge by introducing the details of the system to guests at the ceremony.

Bishop Hall Jubilee School has installed a new solar power system, the largest such scheme in a Hong Kong school so far.

The system is connected to the CLP power grid and is expected to reduce the school’s electricity bill by 70-80 per cent. Under the CLP’s Renewable Energy Feed-in Tariff scheme, the school will receive rebates based on how much electricity it generates.

According to Widex Technology Development, a Hong Kong-based solar power company which set up the system, its 144 photoelectric panels will generate around 50 kilowatts of electricity. This amounts to around 20 per cent of the school’s total power consumption, reducing the school’s carbon footprint by 28,500kg per year. This is equivalent to the amount of carbon that would be absorbed from the atmosphere by planting 1,240 trees in a carbon offsetting programme which balances out CO2 emissions.

Students were fully involved in the system’s installation. They were also able to tour the power plant after it was activated.

Student helpers demonstrated their STEM knowledge by introducing the details of the system to guests at the ceremony.
Photo: BJHS

Form Six student Vincent Wong Nam-shing said: “We learned the theory and principles behind solar panels, and gained professional knowledge beyond what we learn from books.”

Students will be able to observe the data generated by each panel, helping them to learn science-related concepts such as the relationship between power generation and the weather, said school principal, Wong Lee-lee.

Dr Lee Yui-bor, a former CLP board member and an alumnus of the school, said: “We hope that the project will set an example, encouraging more schools to develop solar-energy facilities on campus, and contributing to a low-carbon future for Hong Kong.”

The scheme was fully funded by Lee’s contributions.

The HK$950,000 system is expected to generate HK$4.5 million worth of electricity at current prices for the school over its 30-year lifespan. Funds generated will be used to provide scholarships for students and support environmental and Stem education.