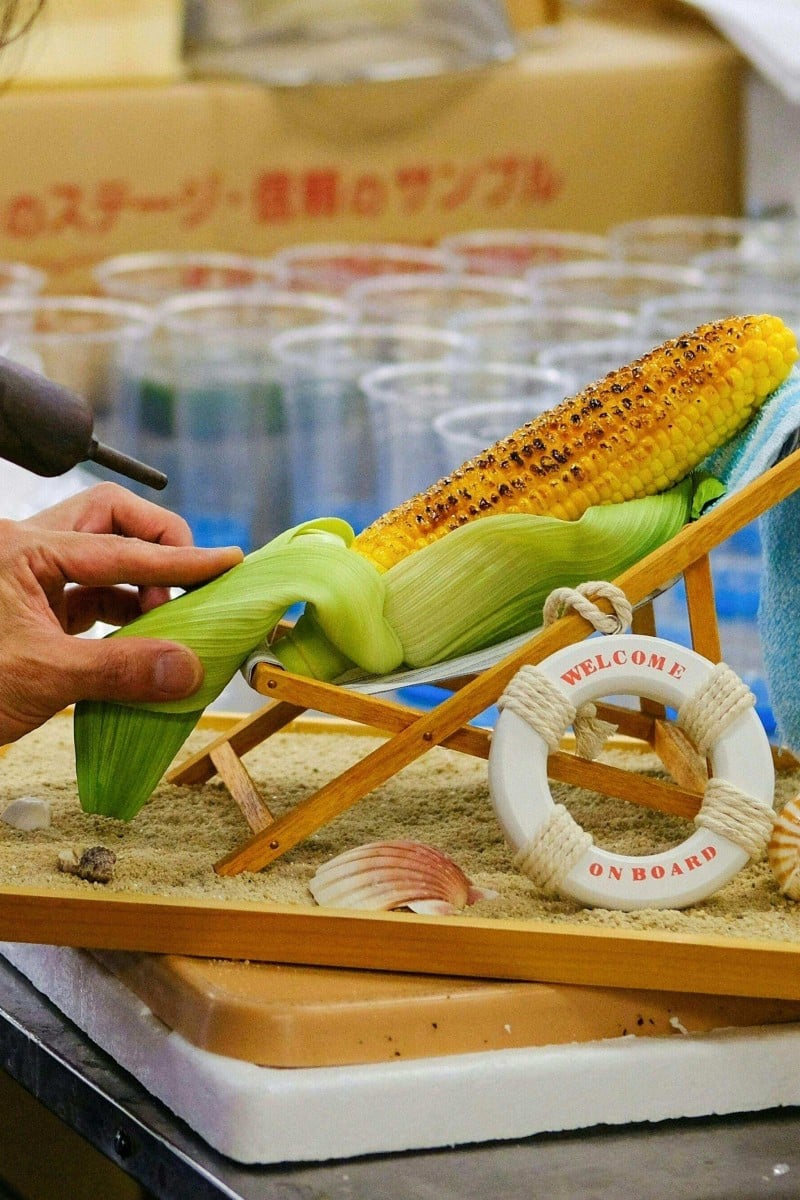 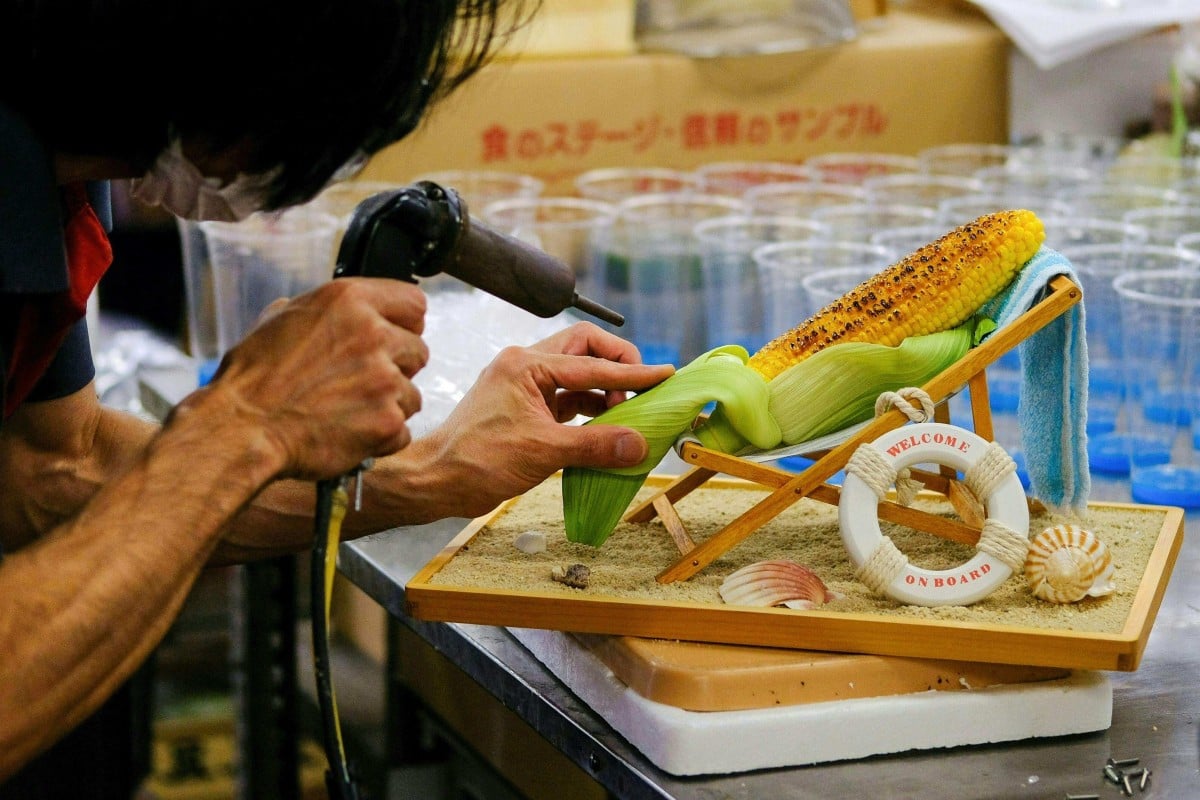 A plastic ear of corn gets a bit burnt while tanning at the beach. Photo: AFP

[1] From the “leaning tower of pizza” to a dragon emerging from a dragon fruit, Japanese artisans’ quirky plastic food sculptures went on display last month at an exhibition in Tokyo.

[2] The models were made with the same painstaking detail as the rock-solid noodle soups and crispy-looking plastic snacks that have long been displayed outside ramen shops and family restaurants across Japan. They are called shokuhin sampuru, or “sample food products”. It has been a century since stores began using wax models to advertise their menu to a growing middle class.

[3] “Normally, we have to follow orders from clients,” said plastic food artist Shinichiro Hatasa, 57. But when dreaming up fun designs, he can use his imagination. “How it ends up is totally up to you,” he said. For the exhibition, Hatasa crafted an ear of corn sunbathing on a beach. Other creations on display included a deep-fried shrimp roaming like a tiger on a mountain of shredded cabbage, as well as a Tetris game made of chicken.

[4] About 60 sculptures were on display. For example, a Japanese breakfast dish of fermented soybeans called natto appeared to spiral in the air, resembling a powerful cyclone – nicknamed a “nattornado”. “They are not real, but they look so real. It’s wonderful,” said exhibition attendee Reiko Ichimaru. All the models were handmade by specialists at Iwasaki Group, Japan’s leading sampuru maker, which celebrates its 90th anniversary this year.

[5] At an Iwasaki factory in Yokohama near Tokyo, artisans take moulds of ingredients from actual meals cooked by the firm’s restaurant clients. Then, they begin the meticulous work of decorating the samples to look as realistic as possible, from moisture droplets on chilled glass to subtle bruises on a fruit’s surface.

[6] “Fresh things are more difficult to make ... Cooked items are easier”, because the colours are less complicated, said factory head Hiroaki Miyazawa. “Hamburger patties are for beginners,” he added.

[7] Fake food is a multimillion-dollar market in Japan, but sampuru production has been hit by the Covid-19 pandemic, which reduced demand for dining out.

[8] Sampuru makers hope more tourists will soon be allowed into the country to boost the restaurant industry, but they are also using their unique skills elsewhere. For example, Iwasaki artisans have made replica bananas at different degrees of ripeness for factories to use to train new employees. Orders have also come in from IT sales merchants, who want to use mock 5G Wi-fi routers in their presentations.

1. Find a word in paragraph 1 that means “unusual, especially in an interesting way”.

3. According to paragraph 2, which two places are sampuru commonly found? (2 marks)

4. The sampuru at the exhibition are different to the ones ordered by clients because ... A. they are more expensive. B. they are fun and creative in design. C. they are not made of plastic. D. they are edible.

5. Decide whether the following statements are True, False, or the information is Not Given in paragraphs 3 and 4. Blacken ONE circle only for each statement. (4 marks) (i) Hatasa’s creation is based on one of his favourite childhood memories. (ii) The Tetris game structure is made of shrimp and shredded cabbage. (iii) One of the plastic structures featured in the exhibition is named after a type of food and a cyclone. (iv) The exhibits were created by food artists from around the world.

6. According to paragraph 5, which of the following is NOT added to the sampuru to make them more realistic? A. decoration B. bruises C. droplets of water D. flavouring

7. According to the explanation provided by Miyazawa in paragraph 6, which of the following food items is the hardest to make? A. a bowl of chilled soba B. a slice of pizza C. a raw steak D. a plate of pasta

8. According to paragraph 8, what non-food replica has been created by sampuru makers at Iwasaki, and for what purpose? (2 marks)

From the “leaning tower of pizza” to a fish slicing and cooking itself, Japanese artisans’ quirky plastic food sculptures went on display last month at an exhibition in Tokyo. Photo: AFP