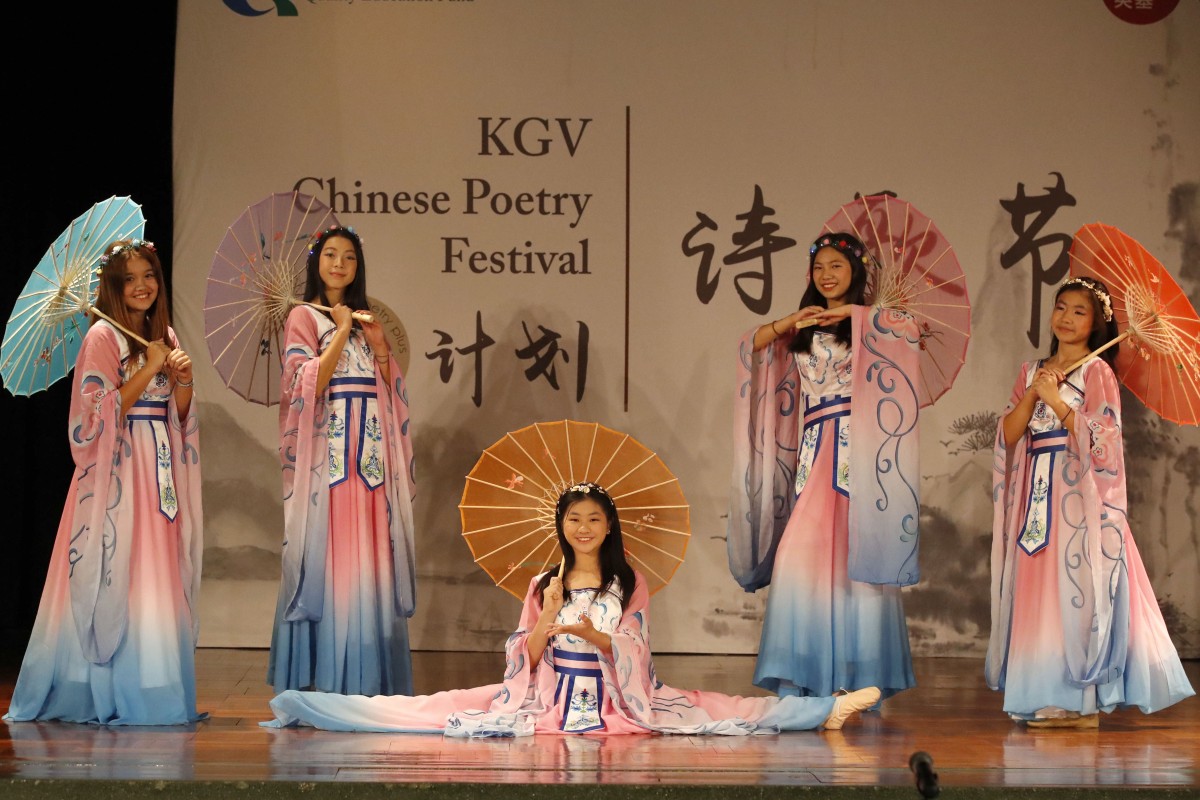 Students gave a dance performance based on their interpretation of Chinese poems.

The beauty of Chinese poetry often lies in how poets capture and channel their emotions into the portrayal of a scene. Taking inspiration from classical and modern Chinese poems and merging them with knowledge from other disciplines, a group of King George V (KGV) School students have created their own interpretations, poems and artwork, bringing the school’s Chinese Poetry Plus Project to a successful conclusion.

These innovative “masterpieces” were exhibited at the school hall during KGV’s first Chinese Poetry Festival on October 18.

The first thing to catch visitors’ eye was a Hong Kong-inspired installation. Placed by the entrance to the hall, it consisted of some colourful Chinese neon signs flashing on top of a stand made out of bamboo sticks. The art exhibit was created by 15 Year 12 students earlier this year under the guidance of famous local designer Dylan Kwok.

Poetry 101: A beginner's guide to understanding and analysing poems

Following the shapes of their own selected words and phrases that capture the essence of different Chinese poems, students were asked to bend and twist wires, turning them into the blazing neon signs.

“The phrase ‘free and easy’, for instance, was chosen [after learning of] Chinese poet Li Bai’s Bring in the Wine. It represents his dream to live freely, as well as the expectations he held for the society he was living in. Sharing his thoughts, we recreated it,” one of the student creators, 16-year-old Annie Yeung Yeuk-ying, told Young Post.

“[In addition to extracting words from poems], we also combined individual characters and turned them into new phrases,” said Kathy Shen Yanxi, 16. “For example, the Chinese words ‘dream,’ ‘thoughts’ and ‘person’, now put together, can be read as ‘dreamer’.”

One of the eye-catching exhibits at KGV’s Chinese Poetry Festival featured some colourful Chinese characters in neon, flashing on top of a stand made out of bamboo poles.
Photo: KGV

Despite the multiple meanings embodied in the installation, the student artists deliberately selected simple Chinese words.

“Hoping to spread Chinese culture, we wanted to make sure the artwork could be easily understood by our peers, many of whom do not speak Chinese as their first language,” explained Kathy.

Making neon signs for the first time, the student creators all agreed that the craftwork was tricky. Sixteen-year-old Guo Jiakai admitted spending two hours on the word “dream”. “We all started by outlining the selected characters on paper, then bent and twisted the wires according to our drafts,” he said.

From Typhoon Mangkhut to Chinglish: Winning student poets on the challenges of writing HK stories for a global audience

But the students agreed that their hard work was worth it. “This is a very special interactive learning experience ... Putting aside the boring textbooks, we’ve created something very meaningful together,” remarked Kathy.

While some Year 12 students incorporated design into the appreciation of Chinese poetry, some Year 10 students teamed up to recreate the scenery of three Chinese poems – River Snow, Saying Goodbye to Cambridge Again, and Thinking of the Past on My Way to Tong Pass – using virtual reality. The interactive VR experience was another highlight of the festival.

“We used 360-degree panorama images found in Google Maps, as well as some pictures provided by our instructor, said Preston Du Zhehao, 14, who mainly worked on the technology side.

Taking the recreation of the poem River Snow as an example, 14-year-old Eric Wang Shengbing told Young Post the visuals were selected based on the setting and mood depicted in the ancient texts.

“The poem is filled with melancholy, and is basically about the poet’s own form of isolation. Its first line describes an empty landscape with no birds or sounds, except for a man on a boat by himself,” he said. Eric explained that they chose a snow-covered landscape image to evoke sadness and highlight the narrator’s self-imposed isolation. “The first time we read it, it created such a vivid image in our mind,” Eric said. “We wanted to understand and research why the author felt that way, and what circumstances made him feel that way.”