Best-backed late, Top Act enjoyed the box-seat run, advanced to the front three deep at the 150m and staved off the unlucky Dynamism to remain unbeaten in three outings over this Sha Tin trip. Dynamism settled three back along the rails, got squeezed out for a run along the inside approaching the 350m, took the gap 300m out, switched out three deep at the 150m and came home strongly to make it close. He should have won. Favourite Renaissance Art was caught deep until getting one off in second at the 1,300m, advanced to the front 400m out and peaked on his run 50m out. Lucky Omens settled third from the rear along the rails, shifted three deep at the 300m and finished well to inject some value into the Quartet. Selkirk Star settled second from the rear, pulled widest out coming to the final bend and let down well until hitting a flat spot 100m out. Take To The Limit made his run outside Dynamism, swung the final bend with two further out and made some ground without menacing. He's better over a longer trip. Anticipation was hard pressed on the lead, cornered narrowly on top and was stopping 200m out. Bubble Chic had no excuse following a one-out, one-back run.

SAVVY NATURE was withdrawn on 6.6.15 by order of the Stewards acting on veterinary advice (lame right fore).

Before being allowed to race again, SAVVY NATURE will be subjected to an official veterinary examination.

TOP ACT, which bumped a rail after leaving the Parade Ring, was examined by the Veterinary Officer on arrival at the Start and passed suitable to race.

Rounding the Home Turn, ANTICIPATION (M Chadwick) got its head on the side and lay out.

At the entrance to the Straight, DYNAMISM attempted to improve to the inside of ANTICIPATION which, after being taken in slightly by RENAISSANCE ART, then shifted in marginally of its own accord, resulting in DYNAMISM being checked and held up for clear running until the 300 Metres.

M Chadwick was advised that whilst the Stewards accepted his horse made the turn awkwardly and that he was at all times endeavouring to correct his mount and to bring it back to a position close to the rail, in similar circumstances he must ensure that he is fully aware of other runners improving to his inside and that he makes every endeavour to prevent his mount from shifting ground and causing interference.

TAKE TO THE LIMIT was held up and unable to obtain clear running until passing the 300 Metres.

LUCKY OMENS was inclined to lay in under pressure in the Straight.

When questioned, N Rawiller (WAYFOONG EXPRESS) stated that he was instructed not to push the horse along in the early stages, however, was to allow it to find a position where it was comfortable.

He said WAYFOONG EXPRESS did not stretch out comfortably in the early stages, was unable to maintain a forward position and settled at the rear of the field.

A veterinary inspection of WAYFOONG EXPRESS immediately following the race did not show any significant findings.

RENAISSANCE ART, TOP ACT and DYNAMISM were sent for sampling. 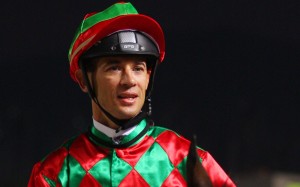