Honest Horse led from gate nine, cornered near two lengths on top and drew clear for an impressive debut win. Favourite Energetic Class held a one-out, one-back spot, rallied five deep upon straightening and wore down I'm A Witness 100m out for second. I'm A Witness was caught without cover deep near the speed from a wide gate, straightened three deep and kept on well to just hold newcomer Who Else But You for a placing. Who Else But You caught the eye when coming on nicely three from the right after getting crowded out at the start. Magical Beam made some ground widest out after travelling deep without cover fourth from the rear. Bear Rapper ran on steadily with one wider out after a deep run with cover in midfield. He needed the run following surgery. Sparkling Talent didn't have much to offer in the run to the wire following a box-seat run in a disappointing run despite a drop in class.

VICTORY BOYS was withdrawn on 12.11.15 by order of the Stewards acting on veterinary advice (cut and swollen right front cannon) and was replaced by Standby Declared Starter BEAR RAPPER.

As previously advised, VICTORY BOYS will be subjected to an official veterinary examination before being allowed to race again.

I'M A WITNESS was difficult to load.

Before being allowed to race again, I'M A WITNESS will be required to perform satisfactorily in a stalls test.

LETSGOFREE was slow to begin.

LION ROCK became unbalanced after being bumped by I'M A WITNESS on jumping.

WHO ELSE BUT YOU began only fairly and then shortly after the start was checked when crowded for room between STRATEGIC ARMY and HONEST HORSE (C Schofield) which, after beginning awkwardly, shifted in and then shifted in further when being ridden along.

C Schofield was advised that in similar circumstances he would be expected to make every effort to prevent his mount from shifting ground.

From a wide barrier, SAMMY'S EMPIRE was shifted across behind runners in the early stages.

Approaching the 900 Metres, GOOD LUCK MAN commenced to race ungenerously and got its head up repeatedly.

GOOD LUCKY MAN continued to race ungenerously and passing the 900 Metres was checked when crowded for room inside I'M A WITNESS (N Callan).

ENERGETIC CLASS, which was following GOOD LUCK MAN, was inconvenienced in consequence.

After considering all the circumstances of this incident, the Stewards could not be comfortably satisfied that the racing manners of GOOD LUCK MAN had not played a significant part in this incident and accordingly N Callan was advised that he was being given the benefit of the doubt.

Nonetheless he was severely reprimanded and advised to ensure that he is properly clear when shifting ground in similar circumstances.

After this incident, both I'M A WITNESS and GOOD LUCK MAN travelled wide and without cover.

MAGICAL BEAM lost its left front plate near the 900 Metres.

After passing the 900 Metres, I'M A WITNESS became unbalanced after shifting in towards the heels of HONEST HORSE which was shifting out to relieve the tightening to SPARKLING TALENT.

Making the first turn after the 900 Metres, STRATEGIC ARMY got its head up and shifted out towards the heels of BEAR RAPPER.

C Schofield pleaded guilty to a charge of careless riding [Rule 100(1)] in that at the 800 Metres he permitted HONEST HORSE to shift in when not clear of SPARKLING TALENT, causing that horse to be unnecessarily crowded for room and to lose the running to which it was rightfully entitled.

C Schofield was suspended from riding in races for a period to expire on Thursday, 24 December 2015 on which day he may resume race riding (3 Hong Kong racedays).

Over about the final 150 Metres, LETSGOFREE was unable to obtain clear running and consequently was not able to be tested.

Near the 100 Metres, STRATEGIC ARMY became unbalanced when crowded for room between LETSGOFREE and LION ROCK which was taken in by GOOD LUCK MAN which, when giving ground, got its head up and shifted in away from WHO ELSE BUT YOU.

In this incident, LION ROCK also became unbalanced when bumped by STRATEGIC ARMY.

After the race, an endoscopic examination was conducted on ENERGETIC CLASS at the request of Trainer C W Chang.

Before being allowed to race again, ENERGETIC CLASS will be subjected to an official veterinary examination.

A veterinary inspection of LION ROCK immediately following the race did not show any significant findings.

HONEST HORSE and ENERGETIC CLASS were sent for sampling. 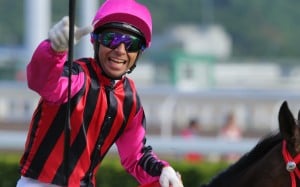 Waikuku is a Group One winner in waiting: Joao Moreira