Favourite Never Better enjoyed a dream run, straightened four deep and just wore down Flying Monkey in the shadows of the post for a first win at his 14th outing. He might find it harder carrying weight in this grade. Flying Monkey showed good gate speed to lead from gate eight, swung the final bend four deep a length on top and wouldn't go down without a fight. He'll be winning races shortly. Specked late, Emperor Victory made a steady bid one off the fence following a rails run in midfield to grab a placing. Sensationally- backed at the jump, Speedy Sandy eased back to last from a wide gate, swung the final bend widest out and finished willingly to snatch a Quartet spot on the line. Winning King had every chance following a one-off run in fourth. Plunged late in betting, Mutual Joy made some ground without menacing two from the right after travelling two deep with cover worse than midfield. Massive Millennium was handy in the run with cover, made his move at the 500m and peaked on his run 200m out. Kim Glory was never a factor travelling second from the rear following a sluggish break.

In this incident, KIM GLORY shifted in and bumped the hindquarters of MASSIVE MILLENNIUM which became unbalanced.

From the outside barrier, HASTA LA VISTA was shifted across behind runners in the early stages.

Approaching the 1100 Metres, MASSIVE MILLENNIUM was awkwardly placed outside the heels of WINNING KING which shifted out.

Making the first turn after the 1000 Metres, FLYING MONKEY travelled keenly, got its head up and lay out.

After this, FLYING MONKEY continued to travel keenly in the lead.

Approaching the 900 Metres, EMPEROR VICTORY was awkwardly placed outside the heels of NEVER BETTER.

Near the 600 Metres, MASSIVE MILLENNIUM was steadied away from the heels of WINNING KING.

MUTUAL JOY, which was following, shifted out away from the heels of MASSIVE MILLENNIUM in consequence.

In the Straight, NEVER BETTER lay out under pressure and proved difficult to ride.

When questioned, K Teetan stated that at its most recent start over 1000 Metres, SPEEDY SANDY had finished off its race well after being ridden in about a midfield position.

He said in tonight's race it was felt that there were a number of horses that were drawn more favourably than SPEEDY SANDY which had shown good speed in their races and it was felt that if SPEEDY SANDY had to do too much work in the early stages to cross runners and obtain a position closer to the rail, it would not be able to finish off the race.

He said he was given the option to go forward if SPEEDY SANDY were to begin very well and he was able to assess that a forward position could be obtained without making too much use of the horse.

He said otherwise he was instructed to shift SPEEDY SANDY across behind runners and obtain a position with cover.

He added SPEEDY SANDY began satisfactorily, but he ascertained in the early stages that a significant number of horses were being ridden along to go forward and therefore he felt that it was in the best interests of SPEEDY SANDY for the horse to be shifted across behind runners and obtain cover.

He said when ridden in this manner SPEEDY SANDY finished off the race strongly.

A veterinary inspection of MASSIVE MILLENNIUM and KIM GLORY immediately following the race did not show any significant findings.

NEVER BETTER and FLYING MONKEY were sent for sampling. 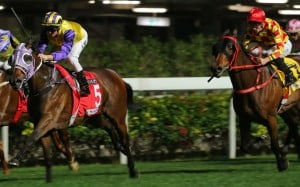