Monica finished nicely to run down favourite Cordyceps 40m out after peeling off the fence following a prominent run at the 200m. Cordyceps found one too good after hitting the front 150m out racing one-out, one-back carrying equal top weight. He's itching to salute in his past three of four runs this term. Touch Of Luck closed well following a midfield run on the fence to fill a placing. The step up in distance was not an issue and he'll be winning shortly. Hinyuen Swiftness wouldn't go down without a fight after getting softened in front by Quadruple Double. He rarely produces a bad run but has limited upside off his current mark. Quadruple Double was on his tippy toes 100m out after pressing the leader from a wide gate. He doesn't run out a strong 1,400m.

ABSOLUCOOL was withdrawn on 15.12.18 by order of the Stewards acting on veterinary advice (lame left fore) and was replaced by Standby Declared Starter KING MORTAR (Apprentice H T Mo).

Before being allowed to race again, ABSOLUCOOL will be subjected to an official veterinary examination.

SOCCER MASTER was withdrawn on raceday morning by order of the Stewards acting on veterinary advice (lame right fore).

Before being allowed to race again, SOCCER MASTER will be subjected to an official veterinary examination.

When entering the track, TOUCH OF LUCK became fractious and made contact with a rail, resulting in its rider, C Y Ho, being dislodged without incident.

TOUCH OF LUCK was examined by the Veterinary Officer who said in his opinion it was suitable to race.

In this incident, KA YING BRILLIANCE shifted out and bumped the hindquarters of SUNNY MAJOR which became unbalanced.

From the outside barrier, KEEP WINNING was steadied in the early stages and shifted across behind runners.

Approaching and passing the 1100 Metres, KA YING BRILLIANCE proved difficult to settle and got its head up for some distance.

After the 1100 Metres, KING MORTAR was left racing wide and without cover and in the Straight gave ground.

Making the turn near the 900 Metres, FLASH FAMOUS commenced to travel keenly.

Then passing the 800 Metres, FLASH FAMOUS got its head up when awkwardly placed behind TOUCH OF LUCK.

Passing the 800 Metres, when the pace steadied, CORDYCEPS shifted out away from the heels of QUADRUPLE DOUBLE, taking KING MORTAR wider still.

At the same stage, KA YING BRILLIANCE got its head up when awkwardly placed behind SUNNY MAJOR and shifted out, resulting in KEEP WINNING being taken very wide.

KEEP WINNING was then allowed to improve its position but continued to race wide and without cover.

Approaching the 600 Metres, SEIZE THE SPIRIT raced tight between TOUCH OF LUCK which shifted out away from the heels of MONICA which was awkwardly placed behind HINYUEN SWIFTNESS and SUNNY MAJOR which improved into tight running inside KING MORTAR.

After this, SUNNY MAJOR continued to be awkwardly placed close to the heels of KING MORTAR.

MONICA had difficulty obtaining clear running in the early part of the Straight.

Near the 50 Metres, C P POWER was shifted out away from TOUCH OF LUCK when that horse drifted out under pressure.

A veterinary inspection of KING MORTAR immediately following the race did not show any significant findings.

MONICA and CORDYCEPS were sent for sampling. 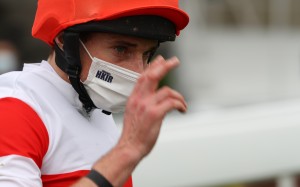