Favourite The Full Bloom got the run between horses near the inside following a midfield run on the fence to overhaul Triumphant Light 30m out for the win. Triumphant Light found one just too good after hitting the front 200m out travelling better than midfield. He can bob up now and then and the better draw did help this time. Savvy Seven closed nicely after travelling fourth from the rear to fill a placing. The downgrade helped but a step up to a mile will suit him better. Bonito came from last to nearly place at huge odds in a vastly-improved run at his 11th start. That was clearly not expected. Old-timer Cour Valant ran on without menacing travelling three-deep with cover behind midfield. The switch to the 1,400m helped him on this occasion. Dragon Warrior wasn't too far away in the end after chasing the speed three-deep without cover from a wide gate. Best Gift was giving ground 150m out after hitting the front at the 300m.

Before being allowed to race again, HONG KONG'S FOLKS will be subjected to an official veterinary examination.

STARLOT and HIDDEN SPIRIT bumped heavily at the start, resulting in both horses becoming badly unbalanced.

After this, despite being ridden along, both STARLOT and HIDDEN SPIRIT failed to muster speed.

TRIUMPHANT LIGHT shifted in at the start and bumped BONITO.

Despite being ridden along in the early stages from a wide barrier, ENJOYABLE SUCCESS failed to muster speed and shortly after the start was shifted across behind runners.

When being steadied to obtain cover behind TRIUMPHANT LIGHT, THE HAPPY BUNCH travelled keenly and got its head up on a number of occasions passing the 1100 Metres.

Shortly after the 400 Metres, THE FULL BLOOM was shifted to the inside of BEST GIFT and then after being held up for clear running raced in restricted room between that horse and GOBI STORM when improving into a tight run between those horses.

In this incident, GOBI STORM became unbalanced on two occasions when bumped by THE FULL BLOOM.

THE FULL BLOOM continued to race tight inside BEST GIFT until passing the 200 Metres.

Near the 350 Metres, ENJOYABLE SUCCESS was shifted in away from the heels of THE HAPPY BUNCH.

Then passing the 300 Metres, ENJOYABLE SUCCESS was shifted to the inside of STARLOT which shifted out.

ENJOYABLE SUCCESS was then unable to obtain clear running for the remainder of the race and consequently was not able to be tested.

Also near the 350 Metres, GREAT SON was checked when crowded for room between DRAGON WARRIOR (D Whyte) which was racing tight inside SAVVY SEVEN and BEST GIFT (C Y Ho) which shifted out under pressure.

C Y Ho was reprimanded and advised that in similar circumstances he would be expected to stop riding and straighten his mount.

In this incident, D Whyte momentarily stopped riding DRAGON WARRIOR to alleviate the tightening to GREAT SON when continuing to race in restricted room inside the heels of SAVVY SEVEN.

THE HAPPY BUNCH, which was following GREAT SON, was shifted out away from the heels of that horse in consequence.

Approaching the 300 Metres, HIDDEN SPIRIT raced tight outside BONITO which shifted out under pressure.

At the 200 Metres, AMBITIOUS SPEEDY and THE HAPPY BUNCH were hampered when both attempted to improve into tight running between DRAGON WARRIOR and GREAT SON which shifted out.

Throughout the race, DRAGON WARRIOR travelled wide and without cover.

A veterinary inspection of ENJOYABLE SUCCESS and AMBITIOUS SPEEDY immediately following the race did not show any significant findings.

A veterinary inspection of THE HAPPY BUNCH immediately following the race did not show any significant findings, however, the horse was unable to be scoped due to being fractious.

THE FULL BLOOM and TRIUMPHANT LIGHT were sent for sampling. 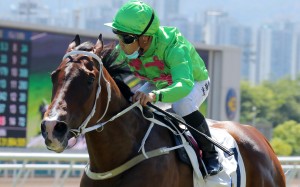