Firming favourite Noble Steed came with a powerful weaving run from near the rear to deservedly return to the winner's circle. He remains a force to be reckoned with up in grade off a light weight. Craig's Star wouldn't go down without a fight after hitting the front 100m out following a dream run in the box-seat. Uncle Steve finished well down the outside after a patient ride third from the back to make it close on the wire. He's naturally coming to hand and will be saluting shortly. Comfort Life kept on better after hitting the front 200m out stalking the leader Magnificent from an awkward gate. Invincible Missile came up flat inside the last 100m after looming a winning chance 150m out following a one-off run fore of midfield. Circuit Hassler ran on late near the outside after travelling one from the back. He's not far off a bottom. Triumphant Horse ran on without menacing travelling beyond midfield after a sluggish start. He's got ability.

On Thursday, 4 April 2019, the Stewards heard a complaint lodged by N Callan that he was rightfully engaged as the rider of UNCLE STEVE but had not been declared on that horse.

The owners of UNCLE STEVE were not able to be present at the hearing with Mr Moore, under an authority to act, representing their interests.

At the time of declaration, K C Leung was declared as the rider of UNCLE STEVE.

After hearing evidence from both N Callan and Mr Moore, the Stewards were satisfied that N Callan had been properly engaged to ride UNCLE STEVE in this race and that subsequent to being engaged the owners of that horse had elected to engage the services of K C Leung.

The Stewards ruled that as K C Leung had been declared to ride UNCLE STEVE, he would fulfil that engagement, however, N Callan was to be paid a winning and/or losing riding fee/percentage, depending on UNCLE STEVE's finishing position in the race.

As the owners of UNCLE STEVE were not able to be present, they were advised that they had until midday on Sunday, 7 April 2019 to make representations to the Stewards in respect of this matter.

The owners advised the Stewards on Saturday, 6 April 2019 that they accepted the ruling of the Stewards.

PAKISTAN FRIEND began only fairly and then, despite being ridden along in the early stages, failed to muster speed.

From wide barriers, CONFUCIUS DAY, CIRCUIT HASSLER and THE ONE were all shifted across behind runners in the early stages.

Passing the 1200 Metres, PRANCE DRAGON commenced to travel keenly, shifted in abruptly away from the heels of COMFORT LIFE and became awkwardly placed close to the heels of INVINCIBLE MISSILE.

After this, PRANCE DRAGON continued to travel keenly and was left racing wide and without cover after the 1000 Metres.

Rounding the Home Turn, CONFUCIUS DAY got its head on the side and lay out towards the heels of THE ONE.

After improving into tight running inside PRANCE DRAGON, NOBLE STEED was taken in marginally by that horse approaching the 200 Metres, resulting in TRIUMPHANT HORSE being steadied away from the heels of PRANCE DRAGON.

COMFORT LIFE continued to shift out under pressure and inconvenienced NOBLE STEED until near the 50 Metres.

Apprentice Chan was reprimanded and told that in similar circumstances he would be expected to stop riding and straighten his mounts rather than continuing to allow them to shift out under pressure.

Approaching and passing the 150 Metre, WINNING ENDEAVOUR was steadied away from the heels of MAGNIFICENT which was giving ground.

Throughout the race, THE ONE travelled wide and without cover.

A veterinary inspection of PAKISTAN FRIEND immediately following the race did not show any significant findings.

NOBLE STEED and CRAIG'S STAR were sent for sampling.

After the running of Race 2, the track classification was officially changed from "Good??to "Good to Firm?? This change in the opinion of the Stewards should be recorded as being retrospective.

As a consequence of this, the official results will show Race 2 being run on a track rated "Good to Firm?? 2.

The Stewards today concluded an inquiry into the circumstances surrounding the late notification of YOUNG EMPIRE being found to be lame in its left front leg the day after the horse competed at the Happy Valley racemeeting on Wednesday, 27 March 2019.

After taking evidence from Mr W Y So, the trainer of YOUNG EMPIRE, a number of his stable staff together with representatives from the Department of Veterinary Clinical Services and Department of Veterinary Regulation, Welfare and Biosecurity Policy, the Stewards took no further action other than to remind Mr So of the requirement for horses which may have veterinary issues to be notified to the relevant veterinary departments at the earliest opportunity.

Fines Race 2: Apprentice K H Chan (MONICA): $2,000 for presenting himself to weigh out in the incorrect colours.

Warnings Race 2: R Bayliss (EZRA) re his riding in the early and middle stages.

Race 5: N Callan (WHISKY KNIGHT) for shifting in after the 1000 Metres.

Race 8: Apprentice K H Chan (CALIFORNIA FORTUNE) for shifting in near the 1150 Metres. 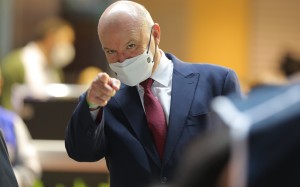 Hayes warms up for HKIR by snaring IJC trainers’ bonus

Watch the last start of every HK Sprint runner, including Pixie Knight

Watch the last start of every HK Mile runner, including Golden Sixty and Salios

Watch the last start of every HK Cup runner, including Loves Only You