Destin just held on for the win after hitting the front 230m out travelling one off better than midfield for a second win from 29 starts. He rarely produces a bad run in this grade. City Legend closed very well to make it close in the end after rolling in twice under pressure following a patient ride fifth from the back. Witness Hunter stayed on a distant third after settling one-off behind midfield. He's in the right grade and the combination of fitness and the big weight took its toll. Villa Fionn kept on all right following a handy run on the fence. He's well rated and it was a better effort following a stable change. This One's For You made some headway without menacing from behind midfield. Savvy Seven was doing his best work late down the outside from near the back. Early favourite Diamond Legend was tight for room late but was already plodding at the point after making only a brief move mid-straight from behind midfield on the fence.

MY POWER began only fairly and was then ridden along to obtain a forward position.

On jumping, CHAPARRAL STAR was steadied away from the heels of DIAMOND LEGEND due to both horses shifting ground.

WITNESS HUNTER and IMPECCABLE FELLOW bumped at the start.

WITNESS HUNTER then shifted in and bumped WINNING WARRIOR which shifted out.

WINNING WARRIOR consequently became unbalanced and shifted out, causing WITNESS HUNTER to be bumped and taken out by IMPECCABLE FELLOW.

After this, IMPECCABLE FELLOW was shifted across behind runners from a wide barrier.

From a wide barrier, HAPPY HOUR was steadied and shifted across behind runners to obtain cover.

After the 900 Metres, WINNING WARRIOR was left racing wide and without cover.

Passing the 900 Metres, PHENOMENAL was momentarily eased away from the heels of SPARKLING KNIGHT.

Near the 650 Metres, PHENOMENAL got its head on the side and shifted out marginally away from the heels of SPARKLING KNIGHT.

PHENOMENAL was then taken wider when DESTIN improved into tight running between PHENOMENAL and VILLA FIONN.

When PHENOMENAL was taken out, WINNING WARRIOR was taken wider again.

Passing the 500 Metres, WINNING WARRIOR was bumped by PHENOMENAL which got its head on the side and shifted out away from DESTIN.

At the entrance to the Straight, SAVVY SEVEN was momentarily tightened for room between WINNING WARRIOR and PHENOMENAL which continued to lay out.

Passing the 75 Metres, WITNESS HUNTER was inconvenienced when bumped by CITY LEGEND which shifted in before being corrected by its rider.

M L Yeung (THIS ONE'S FOR YOU) pleaded guilty to a charge of careless riding [Rule 100(1)] in that over the concluding stages he permitted his mount to shift out when not sufficiently clear of DIAMOND LEGEND, causing that horse to be checked and to lose the running to which it was rightfully entitled.

M L Yeung was suspended from riding in races for a period to commence on Wednesday, 25 September 2019 and to expire on Wednesday, 2 October 2019 on which day he may resume race riding (2 Hong Kong racedays).

When questioned regarding the disappointing performance of MY POWER, G van Niekerk stated that after beginning only fairly, he had to make some use of the horse in the early stages to obtain a forward position as he was instructed to lead the race.

He said MY POWER quickly gathered speed and he was able to hold the lead on the rail approaching the 1200 Metres.

He said MY POWER would not relax due to a number of runners being positioned to its outside approaching the 1000 Metres and as there were a number of horses attempting to obtain a forward position, the race in the early stages was run quicker than hoped.

He said MY POWER did not travel strongly in the middle stages and after coming under pressure in the early part of the Straight weakened noticeably over the latter stages.

He added that from his experience with MY POWER including the manner in which the horse performed in a barrier trial in the lead up to today's race when ridden by him, he was of the view that the horse may not have been suited by today's "Good to Firm??racing surface.

A veterinary inspection of MY POWER immediately following the race including an endoscopic examination showed a substantial amount of blood in its trachea and also found the horse to have sustained a minor laceration to the right hock.

The performance of MY POWER, favourite for today's race, was considered unacceptable.

Before being allowed to race again, MY POWER will be required to perform to the satisfaction of the Stewards in a barrier trial and be subjected to an official veterinary examination.

When questioned, B Shinn stated that he was instructed to ride CITY LEGEND positively in the early stages and it was anticipated that the horse may be able to obtain a position in midfield.

He said after shifting in to race behind DESTIN after the 1200 Metres, the tempo of the race was quite strong and he felt that he would have had to make use of CITY LEGEND to continue to hold its position behind DESTIN.

He said as he did not believe this would be in the best interests of CITY LEGEND, he did not continue to endeavour to maintain its position which allowed WITNESS HUNTER the opportunity to shift in to race behind DESTIN and in advance of CITY LEGEND.

Having considered the sectional times of the relevant stages of the race, the Stewards accepted Jockey Shinn's explanation.

MY POWER, DESTIN and CITY LEGEND were sent for sampling. 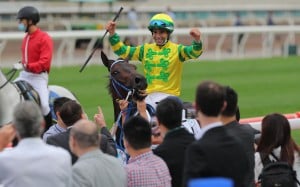 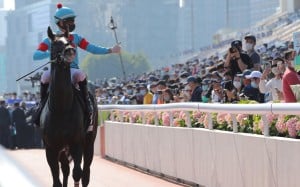