Second favourite What A Legend quickened brilliantly after a patient ride deep near the back to win going away 100m out. The penny has dropped with him to win his past two starts. Confucius Day nearly stole it in front after quickly finding the front from gate nine with the claim well utilised. He has been racing well without saluting and appreciate Alfred Chan Ka-hei's 10-pound claim. Casa De Force ran on well to just miss the Quinella spot after a wide and without cover run in midfield. He's a hard one to get right on his day after misfiring in two past starts over this trip. The One closed well to finish just out of the placings after a patient ride fourth from the back. Rank outsider Cerefino ran on reasonably well after sitting one from the back to just miss a Quartet spot. It was one of his better runs in a long time. Shining On finished well down the outside but left things too late after making his run at the rear following a sluggish break.

LUCKY QUALITY was withdrawn on 6.1.20 by order of the Stewards acting on veterinary advice (lame right hind) and was replaced by Standby Declared Starter CEREFINO.

Before being allowed to race again, LUCKY QUALITY will be subjected to an official veterinary examination.

CHUNGHWA JINGSHEN shifted out at the start and bumped THE ONE, causing THE ONE to lose ground.

THE ONE then shifted out away from CHUNGHWA JINGSHEN, resulting in DRAGON BOLT and SHINING ON being hampered.

After this, both DRAGON BOLT and SHINING ON were shifted across behind runners.

From the outside barrier, CEREFINO was shifted across behind runners in the early stages.

Shortly after the start, CASA DE FORCA momentarily raced in restricted room between CONFUCIUS DAY and E GENERATION which shifted in before being directed back out to relieve the crowding to CASA DE FORCA.

Near the 1150 Metres, FANTASTIC FABIO shifted out and brushed CHUNGHWA JINGSHEN.

Passing the 1000 Metres, DRAGON BOLT got its head up when travelling keenly.

Near the 800 Metres, CHUNGHWA JINGSHEN was left racing wide and without cover.

Passing the 700 Metres, WHAT A LEGEND attempted to improve between NOBLE MAN and CASA DE FORCA where there was insufficient room, resulting in WHAT A LEGEND being awkwardly placed between those horses and racing close to the heels of NOBLE MAN near the 650 Metres.

When improving into tight running between THE ONE and WHAT A LEGEND approaching the 500 Metres, DRAGON BOLT was crowded for room between those horses as THE ONE shifted out when awkwardly placed close to the heels of JOLLY CONVERGENCE.

Passing the 400 Metres, THE ONE was held up for clear running behind NOBLE MAN.

Approaching the 200 Metres, JOLLY CONVERGENCE, which had some difficulty obtaining clear running, was awkwardly placed close to the heels of FANTASTIC FABIO when continuing to be held up for a run.

After the 100 Metres, THE ONE was awkwardly placed outside the heels of CASA DE FORCA.

Approaching the 50 Metres, SHINING ON momentarily raced tight outside the heels of CEREFINO.

When questioned regarding the performance of NOBLE MAN, J Moreira stated that the horse began very well from its inside barrier and immediately improved into a forward position without having to be asked.

He said this resulted in NOBLE MAN racing in a more forward position than it did at its initial start.

He said after being crossed by E GENERATION near the 900 Metres, NOBLE MAN was reluctant to maintain its position and he had to ride the horse along passing the 800 Metres in order to hold its position.

He said, despite being ridden along, NOBLE MAN was reluctant to hold its position when racing to the inside of CHUNGHWA JINGSHEN approaching and passing the 700 Metres and he was not able to prevent that horse from improving around NOBLE MAN near the 600 Metres.

He added NOBLE MAN was under considerable pressure rounding the Home Turn and although the horse was momentarily awkwardly placed close to the heels of CHUNGHWA JINGSHEN approaching the 200 Metres, this was of little consequence as NOBLE MAN was already under heavy pressure at this stage.

He said in the Straight NOBLE MAN did not finish off the race and, in his opinion, was disappointing.

He said however that NOBLE MAN is inexperienced and lacks maturity at this early stage of its racing career.

A veterinary inspection of NOBLE MAN immediately following the race did not show any significant findings.

A veterinary inspection of JOLLY CONVERGENCE immediately following the race did not show any significant findings.

NOBLE MAN, WHAT A LEGEND and CONFUCIUS DAY were sent for sampling. 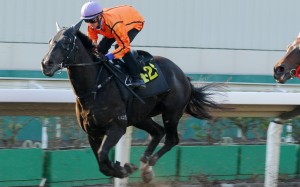