Waldorf flashed home strongly down the outside to grab victory on the wire after a patient ride third from the rear. He's a freak over this course and relished the light weight despite stepping up in class. Fat Turtle did everything right but get the win after settling better than midfield on the fence. He was the class of the race. Hong Kong Bet found a couple just too good in the end after racing to the lead 100m out following a box-seat run. Country Star kept on gamely after rushing forward three-deep after a sluggish start from a tricky gate to sit third coming to the final bend. Gunnison just lost a Quartet spot after rolling forward three-deep to lead 600m out. It was another positive result after waking up with a good second last Wednesday on the dirt. Amazing Star appeared to run his race after breaking through the gate before the start. He led 1,050m out after jumping a step slow, was headed by Gunnison 600m out before reclaiming the front 250m.

After travelling a short distance, HELENA BABY was crowded for room between FAT TURTLE which was racing tight inside HONG KONG BET which got its head on the side and lay in away from SPEEDY KING and WALDORF which was taken out by GENTLE BREEZE.

From the outside barrier, TORNADO TWIST was shifted across behind runners shortly after the start to obtain cover.

Making the turn after the 600 Metres, HONG KONG BET and COUNTRY STAR bumped.

TORNADO TWIST was unable to obtain clear running over the final 50 Metres and consequently was not able to be tested.

When questioned regarding the performance of AMAZING STAR, Z Purton stated that after riding the horse in a gallop on Monday, 17 February 2020, he was dislodged from AMAZING STAR which resulted in it doing more work than had been intended.

He said he rode the horse in a subsequent piece of work on Saturday, 22 February 2020 and he was satisfied with the standard of this work.

He said after being loaded into the barriers AMAZING STAR became fractious and lunged at the front gates, resulting in the gates opening and AMAZING STAR travelling a short distance before being able to be restrained.

He said after being returned to the barriers, he consulted with the Veterinary Officer and he was satisfied for the horse to start.

The Veterinary Officer informed the Stewards that in his opinion AMAZING STAR was suitable to race.

He said after being reloaded into the barriers AMAZING STAR began only fairly, shifted out and bumped COUNTRY STAR.

He said because of the manner in which AMAZING STAR began, he had to ride his mount along in the early stages to take up a forward position and it was not until near the 1000 Metres that he was able to clear runners to his inside and obtain the lead.

He said after the 1000 Metres he commenced to steady the tempo on AMAZING STAR as he had done more work in the early stages than he had hoped.

He said he then rode AMAZING STAR along shortly after entering the Straight, however, AMAZING STAR did not quicken as it had for him previously and then did not finish off the race.

He added whilst AMAZING STAR was disappointing, he believed there were a number of circumstances both prior to and during the race which provided valid excuses for the horse's failure to finish off the race.

A veterinary inspection of AMAZING STAR immediately following the race did not show any significant findings.

The performance of AMAZING STAR, favourite for tonight's race and which had won its previous three starts, was considered unacceptable.

Before being allowed to race again, AMAZING STAR will be required to perform to the satisfaction of the Stewards in a barrier trial and be subjected to an official veterinary examination.

AMAZING STAR, WALDORF and FAT TURTLE were sent for sampling. 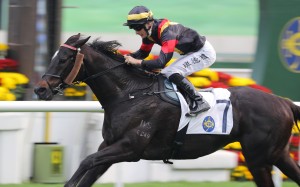 With first Covid-19 jab out of the way, Fownes hopes Sky Field can deliver