Here Comes Ted rolled forward three-deep from a wide gate to eventually clear Viva Mama passing the 600m for the lead, straightened narrowly on top and kept finding to score a second win from five starts over this Valley trip. Sprint Forward came at Here Comes Ted at the head of the straight following a speed-chasing run but couldn't go by. It was a return to form under in-form 10-pound claimer Jerry Chau Chun-lok. Telecom Rocket ran on well near the inside to make it a photo finish for second following a midfield run. He's racing well without winning. Gallant Crown closed well down the outside after a patient ride fourth from the rear to edge odds-on favourite Hercules for fourth. He's still a maiden. Hercules came up flat travelling better than midfield. He wasn't up to the challenge carrying top weight following a last-start win. Oriental Elite ran on steadily without menacing following a one-off run in midfield. It was a typical performance.

TELECOM ROCKET was crowded for room on jumping between NOBLE MAN and HERCULES which shifted in after being bumped by VIVA CHEF.

VIVA CHEF and SUN SUN FA FA then made contact shortly after the start.

HERE COMES TED began awkwardly and bumped the outside of its stall on jumping.

When being steadied to obtain cover shortly after the start, WON BALL was hampered by ORIENTAL ELITE which shifted in.

After being left racing wide at the 900 Metres, GALLANT CROWN was steadied to obtain cover behind ORIENTAL ELITE approaching the 800 Metres.

When being shifted across behind ORIENTAL ELITE, GALLANT CROWN was awkwardly placed outside the heels of that horse passing the 800 Metres.

Approaching the 600 Metres, WINNING WAYS was left racing wide and without cover.

Making the turn near the 600 Metres, NOBLE MAN raced in restricted room inside HERCULES which got its head on the side and lay in away from WINNING WAYS despite the efforts of its rider.

When questioned, Z Purton stated that he had ridden HERCULES on a number of occasions in its track work since its last start success and that work had been good.

He said based on the quality of the horse's track work, he anticipated that HERCULES would race well tonight.

He said after being able to obtain a forward position in the early stages without having to be pressured, HERCULES travelled satisfactorily in the middle stages.

He said after briefly racing keenly approaching and passing the 600 Metres, he shifted HERCULES to the outside of SPRINT FORWARD rounding the Home Turn into clear running, however, HERCULES did not pick up as it did last start.

He added, despite being ridden out in the Straight, HERCULES finished off the race only fairly, however, after the race was making an abnormal breathing noise which the horse had not done at its previous start or in its work.

Mr C H Yip, the trainer of HERCULES, stated that given that HERCULES had worked well since its last start success, he also anticipated that it would perform well tonight.

He confirmed that after the race HERCULES was making a significant abnormal breathing noise which, in his opinion, may have explained the horse's failure to finish off the race as well as anticipated.

He added also that the track had been firmer at its last start when successful which the horse may have appreciated given that it was run in faster time than tonight's race.

A veterinary inspection of HERCULES immediately following the race found that horse to have a continuous epiglottic entrapment.

Mr Yip advised the Stewards that given the breathing noise that HERCULES was making after the race and the veterinary report, it is his intention to add a tongue tie to the horse in its track work with a view to considering whether to add this gear at its future starts.

A veterinary inspection of NOBLE MAN immediately following the race did not show any significant findings. 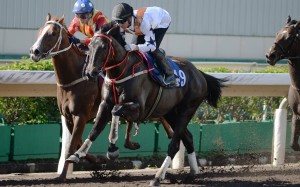 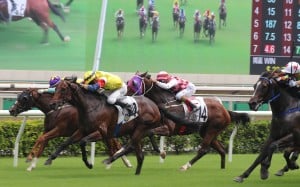 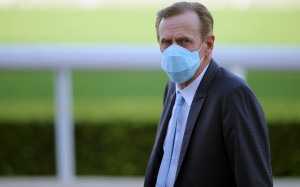