Plunged late Solar Power led from gate 14 and never looked back after cornering two lengths on top to ring up a first win at his 13th start. He put the writing on the wall with a near win last Sunday. Sunny Baby ran on nicely from behind midfield to just edge Kung Fu Tea for second. He was able to build on a solid run on opening day and will be breaking through shortly. King Fu Tea lost the quinella spot late after a wide without cover run in midfield. He appears to have taken the step higher after a win in Class Five in May. President's Choice ran on steadily for fourth after settling five back and three deep with cover. He was fitter for a luckless effort on opening day and is approaching a rating bottom. Country Boy was yielding ground 100m out after chasing the speed one off from a wide draw. He's improving with racing. Flying Victory never fired after a one-out, one-back run. He's better suited ridden for luck. Favourite Beauty Spirit never fired a shot from towards the back. It was a disturbing effort after an opening day placing. Encouraged was withdrawn by the stewards on vet advice.

On arrival at the Start, EMERALD SPUR was examined by the Veterinary Officer who said that after the necessary consultations the horse was suitable to race.

Also on arrival at the Start, L Ferraris expressed concern regarding the action of ENCOURAGED.

A veterinary examination of ENCOURAGED found that horse to be lame in its left front leg and accordingly was not suitable to race.

Acting on this advice, ENCOURAGED was withdrawn by order of the Stewards.

Before being allowed to race again, ENCOURAGED will be subjected to an official veterinary examination.

SWIFT SPIRIT began only fairly and then was bumped on jumping by TELECOM ELITE which shifted in.

From wide barriers, EMERALD SPUR, THE JOLLY and PRESIDENT'S CHOICE were all shifted across behind runners in the early stages.

Passing the 1100 Metres, SUNNY BABY was steadied away from the heels of FLYING VICTORY which in turn was racing tight inside COUNTRY BOY (A Badel) which shifted in.

A short distance after this, FLYING VICTORY was momentarily awkwardly placed inside the heels of COUNTRY BOY which again shifted in.

A Badel was advised to ensure that he exercises more care when shifting ground in similar circumstances.

Passing the 1000 Metres, NOBLE STEED became unbalanced when crowded for room inside BEAUTY SPIRIT which got its head on the side and lay in when awkwardly placed close to the heels of TELECOM ELITE.

EMERALD SPUR, which was following BEAUTY SPIRIT, was inconvenienced in consequence.

After the 1000 Metres, KUNG FU TEA was left racing wide and without cover.

Near the 750 Metres, TELECOM ELITE commenced to travel keenly and was checked away from the heels of SUNNY BABY.

BEAUTY SPIRIT, which was following TELECOM ELITE, was hampered and shifted out away from the heels of that horse in consequence.

THE JOLLY was held up for clear running in the early part of the Straight and passing the 300 Metres was shifted to the outside of SWIFT SPIRIT to obtain clear running.

When questioned regarding the disappointing performance of BEAUTY SPIRIT, J Moreira stated that he was instructed to ride the horse positively in the early stages and it was envisaged that BEAUTY SPIRIT may be able to obtain a position behind the leaders.

He said in accordance with his instructions he rode his mount along for some distance in the early stages, however, BEAUTY SPIRIT did not show any early speed and, despite being ridden along, got back in the field.

He said he had to continually ride his mount along approaching and passing the 1200 Metres in an endeavour to have BEAUTY SPIRIT be as handy as possible, however, the horse would not respond to his riding and because of this raced much further back in the field than had been intended.

He added BEAUTY SPIRIT travelled only fairly in the middle stages and after briefly being awkwardly placed outside the heels of TELECOM ELITE rounding the Home Turn the horse did not respond to his riding in the Straight and was very disappointing in the manner in which it failed to close off the race.

He said BEAUTY SPIRIT was fine during and after the race and he therefore was not able to offer any reason for the horse's disappointing performance.

A veterinary inspection of BEAUTY SPIRIT immediately following the race did not show any significant findings.

The performance of BEAUTY SPIRIT, favourite for today's race, was considered unacceptable.

Before being allowed to race again, BEAUTY SPIRIT will be required to perform to the satisfaction of the Stewards in a barrier trial and be subjected to an official veterinary examination.

A veterinary inspection of EMERALD SPUR, FLYING VICTORY and SWIFT SPIRIT immediately following the race did not show any significant findings. 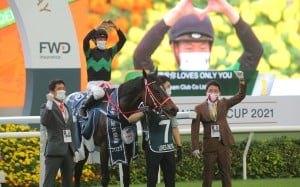